Headlined by Seth Rollins taking on former security personal Jamie Noble and Joey Mercury due to his crumbling relationship with The Authority, as well as Kevin Owens defending the NXT Championship against Neville, could the 1150th edition of Monday Night RAW keep the momentum going heading into Money in the Bank this Sunday? Let's find out. 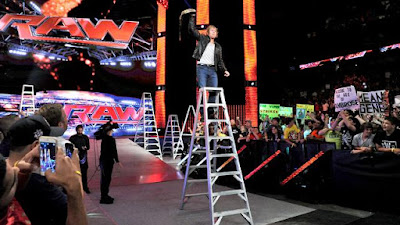 The on-going tension between Seth Rollins and the Authority was the main theme throughout this week's Monday Night RAW, receiving just over half an hour of television time. Rollins' character development throughout the show was the major hook of this for me, as initially he was convinced he still needed help from Stephanie McMahon and Triple H, begging for their help getting his World Heavyweight Championship back from Dean Ambrose, before eventually erupting and choosing former best pals J&J Security as his opponents for the evening. Jamie Noble's performance in the backstage segment was both hilarious (References to the group being "Shield 2.0") and believable, Jurassic Park. Kane was buzzing to reveal his plans to cash in Money in the Bank on Rollins on Sunday, at least the Big Red Monster believes he has a chance of winning.

The match itself was a lot of fun, with a number of enjoyable spots and a straightforward story. The roles were clearly defined, in a bout that could have struggled due to both acts going into the programme as heels, with J&J Security quickly stepping into a protagonist role, with Rollins dominating Mercury early doors. Allowing the match to build naturally to an enjoyable hot tag to Jamie Noble garnered a decent pop from the live crowd, as did a decent near fall with Mercury tripping Rollins as he attempted to suplex The Redneck Messiah. The decision to have J&J Security win, especially considering Rollins hasn't won since Payback in May was a risky one, although Rollins was presented as dominant throughout and clearly had the contest won until Dean Ambrose's interference, so no harm done. (Fun fact: This was Joey Mercury's first televised victory since March 2007 where he teamed with Johnny Nitro and Melina to defeat Brian Kendrick, Paul London & Ashley on Friday Night Smackdown #395, whilst Jamie Noble picked up his first win since September 2008, when he teamed with Mickie James to defeated Paul and Katie Lea Burchill on Monday Night RAW #801)

Ambrose's antics throughout the show were documented on Instagram and shown on screen as the Lunatic Fringe went about New Orleans with his stolen World Heavyweight Championship. A fun addition to the presentation, which allowed Ambrose's involvement to be kept a minimum whilst keeping things ticking over between he and Rollins. His appearance during the main event felt bigger than it really was due to the way he had been featured earlier in the show, and him throwing popcorn over Rollins was something only the former Street Dog could get away with. The closing image of Ambrose standing a top a ladder with the World Heavyweight title, after delivering Dirty Deeds to Rollins, sold the upcoming PPV nicely, as the former Shield pair look to produce their best match to date. 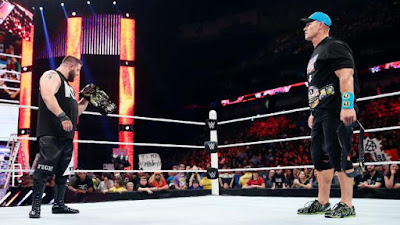 Neville answering the Open Challenge was an interesting choice, due to his placing in the Money in the Bank contract Ladder match on Sunday. Whilst his acceptance promo, choosing a contest against Owens for the NXT Championship over one with Cena for the United States Championship, was ropey to say the best. Whilst the content and reasoning for The New Sensation making his decision all made total sense, Neville's shouty delivery was not to my taste and his Geordie accent still seems to be a problem for the live audiences (I'm going off the differing reaction for Neville on the mic, compared to when in a match, if any American want to correct me, Tweet us @ATPWrestling)

The title bout was perhaps the strongest offering of the programme, with the two contrasting styles presenting a simple, yet effective in-ring story. Bar a slightly over-shot springboard Moonsault to the outside from Neville, everything in the match looked good with some lovely stuff from both men, including a Pumphandle Brainbuster to the Knee from Owens and a deadlift German suplex from Neville that came at the end of a really nice sequence of action. The finish that saw Neville's Red Arrow finish thwarted twice by Owens, before the former Mr. Wrestling hit a Pop-Up Powerbomb for the win, played to both men's strengths and shouldn't harm Neville's continued push going forward. (Fun Fact: this was Neville's first televised loss in six matches. 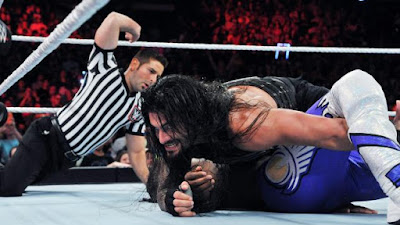 The biggest match on the undercard, this was an entertaining slice of action. Xavier Woods and Big E being at ringside to cause distractions allowed for Kingston to believably control the early points of the bout, with plenty the trio finding a number of inventive ways to keep Kingston on top. Woods, in particular, continue his good work at ringside, flapping his gums and uttering phrases like "Kofi Kingston is the greatest of all time" without a hint of irony. With the strongest false finish of the show, that saw Reigns having to deal with Woods and Big E after teasing a Superman Punch, that allowed Kingston to get roll Reigns up for a long two count, this contest was probably the strongest out of the three bout featuring Money in the Bank contract ladder matches going one on one. I'd have liked to have seen Reigns have to use the Spear to put Kingston away, but the top rope dive into a Superman Punch was still acceptable. 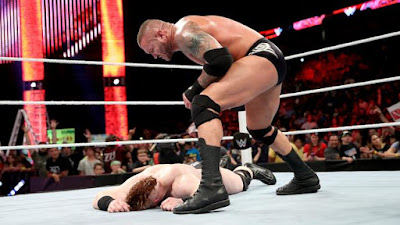 A duller than a One Show segment on soil, this match was neither competitors finest hour. Neither Orton or Sheamus looked particular bothered in creating a bout that didn't act as replacement for Zopiclone, either mindlessly brawling or going through the motions with their move sequences. Just as things seemed to be picking up after Randy Orton's regular comeback sequence, the bout ended with The Viper hitting the Irishman with a steel chair (that Sheamus had introduced). Orton battering The Celtic Warrior post-match was probably the highlight of the whole affair, and the New Orleans crowd seemed to at least get some kind of kick of proceedings, which is good for them. As Sheamus hollered "Are you not entertained?", I couldn't help but reply "Yes, I am not entertained".

Tensions Flare between Money in the Bank contract Ladder match 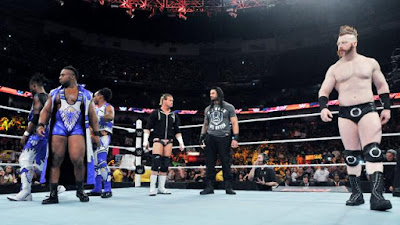 Save for a hilarious interruption from R-Truth, who believed he was part of the Money in the Bank Ladder match, this was a god-awful segment. An utter waste of television time, with nothing that hadn't already been said and a complete lack of direction. Essentially this was your average everyone-comes-out-and-says stuff segment, but with no real confrontation, some piss-poor writing and one of Roman Reigns' worst performances on a microphone to date (telling Kane "Let me show New Orleans how you break jaws", the fuck does that mean Roman?). If the three upcoming contests between those involved in the segment hadn't already been announced before Monday Night RAW I might have had at least a modicum of interest. 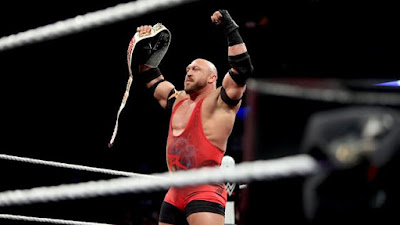 Considering this segment was supposed to be to promote Big Show and Ryback's upcoming Intercontinental Championship bout at Money in the Bank, it was The Miz that stole this segment for me. His current character may be producing some of his best, and telling the crowd "When my hand is up, your mouth is shut" (towards the crowd) may be the best thing The Awesome One has ever said. Miz attempting to manipulate his guests into getting revenge on each other for him was a nice addition to segment, but didn't help to sell what the match between Big Show and Ryback has to offer. Ryback hitting Shellshocked on Big Show to close the segment surely gave away the biggest selling point of their contests on television. 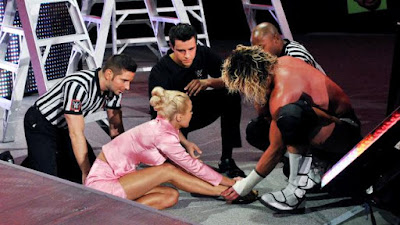 Not a match that I was clambering to see when it was announced, but this was perfectly acceptable fare for television. The bout was paced nicely with the bigger Kane dominating the early proceedings and Ziggler getting enough offence in to not look like a chump against an opponent in his first TV singles bout in a month. A good sequence that saw Kane blocking a superkick, before Ziggler escaped a Chokeslam to hit one anyway was the strongest part of the encounter and worked as a good near fall. The only problem with this for me was the signposting of the finish with Lana standing on the ramp, rather than at ringside. Of course, it was the distraction caused by Rusev confronting Lana, that caused Ziggler to fall to Kane following a Chokeslam. Unless Rusev is going to be involved in the Money in the Bank ladder match on Sunday, I'd have preferred this storyline be put on the back-burner until Rusev is fit and ready to compete. 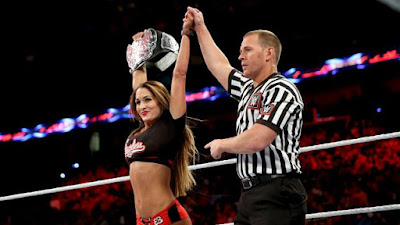 Whilst the idea behind the match was a step forward for the Diva's division, with some impressive use of continuity, after Summer Rae had been noted as one of the women held back by the Bella Twins, the execution of the match was less impressive. A nothing bout, with a lack of heel/face definition from either participant, this did little for the upcoming Diva's Championship match between Nikki and Paige at Money in the Bank, as Nikki hit the Rack Attack to pick up the clean win out of nowhere. A backstage interview from Nikki with Renee Young prior to the contest felt as forced as could be. 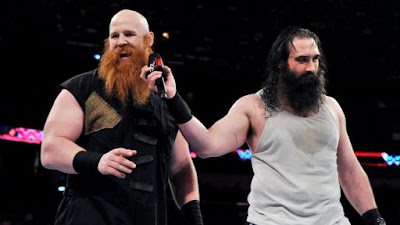 Luke Harper and Erick Rowan continued to dominate with their sixth win since reforming as a tag team, this time over Los Matadores, following The Way double team. A post-match prom fell flat. A bout between Titus O'Neil and Big E was way too short to do either man justice. The forty finalist for Tough Enough were revealed and feature amongst others indepedent wrestlers Big O, Jaina (aka Daniel Bryan's supposed mistress last year), Cassidy Stone, Michael Hayes (not that one) and Patrick Clark, as well as your regular mix of models and body builders. The commentary team shilled American comedy film TED 2 (Mark Walberg/Seth McFarlane) before the trailer aired, which was nice, I suppose. WWE's social media accounts hitting a joint half a billion (the American version) likes/follows/subscribers was pushed throughout the presentation, with focus given to the WWE Youtube and Instagram pages. 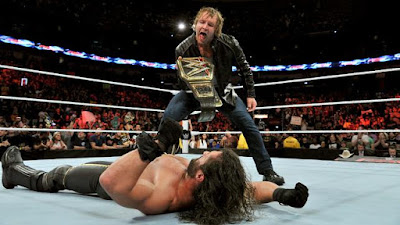 Whilst the main bulk of the television time given to the Seth Rollins/Dean Ambrose and Kevin Owens/John Cena storylines produced some entertaining television, this Raw fell apart on it's undercard. Despite some passable outings (Reigns/Kingston, Ziggler/Kane), a directionless segment pushing the Money in the Bank contract ladder match, a dull Sheamus vs. Randy Orton bout and Nikki Bella all acted to pull the show down and give that dragging effect that many have recognised as a calling card of Monday Night RAW since it switched to three hours in length 150 episodes ago.

Not a classic, but just enough reasons given to tune into Money in the Bank on Sunday.