I've been to plenty of Fight Club: Pro shows over the last year or two, but I've yet to review a show. The main reason for this is that I'll usually write notes as the show is on-going, but the atmosphere and set-up of FCP doesn't really allow for such things. So I've tried something a little different here, taking advantage of the shows two intervals to scribble down some (at times undecipherable) notes. Please let me know what you think of this new style on Twitter @ATPWrestling or Facebook.


Match 1
One Fall Six Pack Challenge for the Number One Contendership to the Fight Club: Pro Championship
Rockstar Spud
Damien Dunne
vs.
Jim Hunter
vs.
Dave Mastiff
vs.
Tyler Bate
vs.
Eric Ryan
vs.
Robbie X 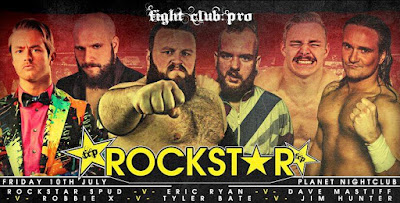 With Rockstar Spud attacked before the match could even get started by MK McKinnan, it was McKinnan's fellow K.Y.S. member Damian Dunne who would step up and take Spud's place in the match. Whilst many seemed disappointed that Spud would not compete (although I'm sure most were expecting to see him later on in some capacity), Dunne's presence gave the match a different dynamic, giving fans someone who they definitely didn't want to see win, due to his association with the champion. This could have been played up a little more in the bout, to give the action a bit more bite, but it's absense didn't have a detrimental effect at all.

The match was blink and you miss it fast, with some big spots and sweet dives to the outside from the number of the competitors involved, with the crowd completely hooked and lively from start to finish. For my liking this match went a little short, which is the main draw back for multi-man bouts with no elimination gimmick, as just as the match seemed to be moving into a high gear it was over, with Tyler Bate hitting a beautifully done German suplex on Dave Mastiff (Yes, a German Fucking Suplex on Dave Mastiff!) Again the action that was presented was off a very high quality, with everyone playing their part in the match well, I'd have just liked to have seen an extra five minutes or so of action to really satisfy my hunger here. 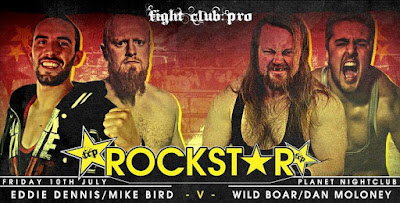 An enjoyable slice of tag team action, I felt that these two teams complemented each other well both in terms of size and style within the ring. The match took your regular tag team format, and did this well, with Wild Boar and Dan Maloney working over Mike Bird with quick tags and everything else you'd expect from a villainous duo, including double teaming numerous times to cut short a potential comeback and hot tag from Bird. This meant that Bird's comeback was taking out both Boar and Maloney on the outside of the ring by sending them into the cage, felt a lot bigger of a moment than it would have, thanks to the struggle he'd gone through.

The match transitioned into a back and forth battle with (with Bird selling on outside for a while), featuring some enjoyable hard hitting, that had a nice pace to it also. The finish was Maloney hit an assisted powerbomb on Eddie Dennis, with Boar able to keep Bird at bay on the outside to give his team the victory. For two tag teams in their infancy this was a well done tag team encounter, but I'd be interested to see what kind of bout they would be able to produce if they all teamed regularly together, not just in Fight Club: Pro but around the country also. 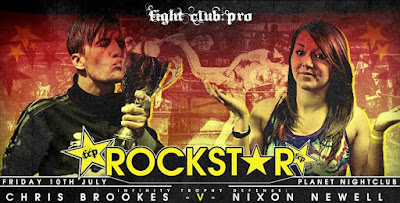 Chris Brookes and Nixon Newell's feud has been brewing for sometime, after Brookes' turn on his former Vulture Squad partner back in December at Infinity. This match played up that feud well in Nixon's first match back in the promotion since February's All the Best, with some vicious throws from Brookes into the cage gimmick, with Brookes looking to win by countout on a number of occasions. Aside from this and inside the ring, the wrestling was very crisp with the pair showing the chemistry that you'd expect from a duo that has been teaming up all over the country (and leaving a trail of Match of the Night contests in their wake) for the last year or so.

The finish was nicely done with Nixon cut off just when she was getting a head of steam, as Brookes connected with his trusty Infinity Trophy, with referee Joel distracted, and Brookes picking up his third defense of the trophy (and seemingly busted Nixon open). With Brookes having to cheat to win, and the aggression shown at points during the match, a No Disqualification based match would certainly seem to be on the card in the future, to give a fitting culmination to their rivalry. I'm sure most in attendance would be interested in seeing a rematch, I know I certainly would.

The plot of the evening thickened when Brookes would issue an open challenge to any "past, present or future" Fight Club: Pro wrestler, with Rockstar Spud answering the call to a nice pop. The match that followed was simple, but effective, with Spud surprising Brookes with a flurry of offence early on, before Brookes took control (once again with the help of the cage), before Spud launched into a short comeback, hitting the Underdog (corner springboard cutter) to capture the Infinity Trophy. Brookes now has reason to complain about losing the Trophy, but the fact that he was the one to open up the challenge will make him look like a whingy sore loser, suiting that character down to ground. A longer rematch would also hit the spot. Spud's promos after winning the Trophy where he claimed he was "Fight Club ******* Pro til I die" was believable, passionate and even hinted at what was to come later in the evening. 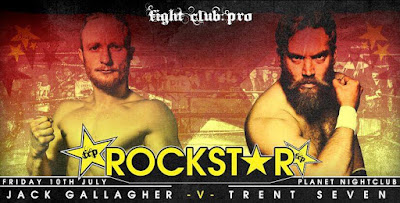 A bloody good match and no mistake. The type of wrestling that I could watch for hour and hours on end, the match was full of stiff strong-style strikes and some lovely submission sequences. Both men bought the aggression from the start, with Jack Gallagher constantly trying to put the match to bed with the cross-armbreaker, with the match breaking out into numerous back and forth strike and chop battles between the pair, with the crowd clearly behind former champion Trent Seven. A stand-out moment of the contest for me saw Seven reverse one of Gallagher's cross-armbreaker attempts into a gorgeous Texas Cloverleaf.

It was a shame that this was only Gallagher's second match in the promotion, as I feel a crowd that was more familiar with the Futureshock Wrestling regular would have provided a better soundtrack to what was a fairly even back and forth, face vs. face contest. Hopefully Gallagher will continue to be booked for FCP over the next six months, on the strength of this match alone I'd expect to see him get a much warmer reaction next time round, having earned the respect of what can be a hard to win over Wolverhampton crowd (Just ask Eric Ryan, who coincidentally walked out to crickets) 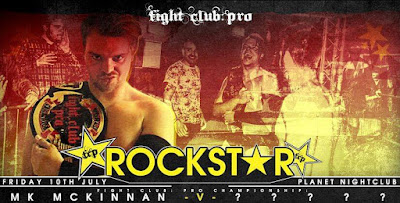 Some of you may remember when I wrote an article gushing about Tyler Bate... and this match backed up everything said in that article. His opponent, the villainous champion MK McKinnan, wasn't too bad either (insert wink face), with the two working together very well to create a captivating main event that wouldn't have looked out of place anywhere in the country. That may be a slight fib, as whilst the match quality was top notch, the work that the two have put in prior in the promotion, McKinnan as the leader of K.Y.S. and Bate as one half of Mustache Moutain, meant that the crowd was red hot, creating a soundscape worthy of a match of this quality.

With Bate catching McKinnan's knee with a drop kick early door and McKinnan hitting a backbreaker, the pair set to work on their respective body parts with a series of inventive moves and submissions, with Bate locking in a Figure Four Leg Lock for a nice near fall. Whilst the reversals and sequence continued to be slick, it's the selling that get's this wrestling nerd excited. McKinnan especially was on tremendous form in this regard, constantly grabbing at his injured knee when the action called for it, it's touches like this that allow the fans to be pulled into the action even further, which is surely the most important part of pro wrestling. After a great false finish that saw Bate kick out of a Pedigree, it was a shame that the second one seemed a little awkward, but only took away slightly from what was a terrific match, that no doubt saw Bate elevated within the ranks of FCP.

Following the bout and a loooooong celebration by McKinnan that actually saw some people leave the building, Rockstar Spud made his entrance to a huge pop. With the Infinitiy Trophy acting in a similar fashion to WWE's Money in the Bank or TNA's Feast or Fired briefcases, Spud had a instant title shot and everyone knew exactly what was about to happen. The match felt almost like an Attitude Era main event, with shed load of interference and a handful of genuinely convincing near falls. If you can convince Marc P that a match is about to end and it doesn't, then you've done your job correctly! With Jimmy Havoc pulling referee Joel out of the ring, after Spud had hit a second Underdog on McKinnan, the match ended in DQ. Maybe a frustrating finish for some, but with FCP favourite and current commentator Clint Margera making the save for Spud everyone was sent home happy. Spud putting over Tyler Bate following the match was also a nice touch and gives Bate even more momentum heading into the next show, whenever that may be.

For me, Rockstar was a show that was more than the sum of it's parts and the parts were pretty good on their own. The on-going story involving Rockstar Spud, that started at the start of the show with MK McKinnan costing him his place in the Six Pack Challenge, continued into the middle section with his defeat of Chris Brookes, before culminating in the main event with his shot at the FCP Championship, gave the show a completeness that means it would make perfect viewing for any wrestling fan, whether familiar with the product or not, whilst also spinning off a series of potential rematches.

Trent Seven vs. Jack Gallagher and Tyler Bate vs. MK McKinnan can fight it out for the Match of the Night, both were top quality matches, with a different flavour.

You can check out Fight Club: Pro on Facebook and Twitter by clicking the links, keep an eye out for the next show being announced, otherwise you'll be missing out on one of the UK's hottest, yet most underrated, promotions.
Posted by QTPW at 20:16