Technically, this was the go-home show for the upcoming network special Live from Madison Square Garden, but WWE also had Hell in a Cell looming three weeks in the distance. Could the promotion continue to keep interest in those shows, whilst keeping Monday Night RAW entertaining at the same time? With Bray Wyatt facing Roman Reigns in the shows main event and Kevin Owens, The Wyatt Family, PCB, The Dudley Boyz and Neville all in action...would this be a home-run for WWE?

A good ol' fashioned recap video to start the show, keeping us clued in on all the goings on of WWE World Heavyweight Champion Seth Rollins and Kane's current storyline. 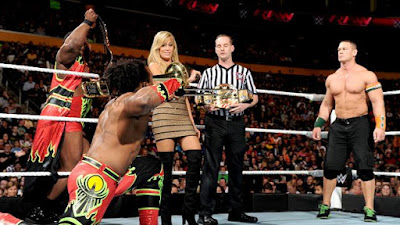 Making no logical sense (because of the previous recap package) the show began with the return of John Cena's United States open challenge. Cena was fine on the mic, but having The New Day come out to answer the call was a great call, with all three members shining on their way to the ring. Whether it was Xavier Woods on the trombone or the Duck Tales references I was completely into everything these guys did. Woods was interesting choice, as I was convinced we'd see Big E get a shot (I seem to remember Cena being quite high on him during his Intercontinental Championship run), but I've been a fan of Woods in-ring work for some time so was happy to see him get his first singles match on RAW since June 2014.


Having Big E and Kofi Kingston kicked out of the bout before the first ad-break seemed like a strange decision for me, as it took away Woods' chances and therefore didn't give the audience much need to come back after the break. 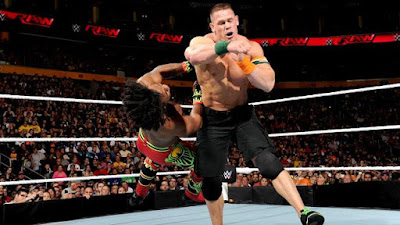 The in-ring content here was enjoyable, with Woods more than holding his own with Cena inside the ring, and getting in a surprising amount of offence against Big Match John. Woods' top rope diving DDT looked really nice, whilst the two showed promise as opponent in a lovely sequence that ended with a well-done sitout powerbomb by Cena. The finish was a bit of a shame, as Kingston and Big E came back out to stop Woods tapping to an STF from Cena, I'd have much preferred a clean finish to start the show and it's not like tapping to Cena would have harmed Woods in any way at all.

The Dudley Boyz made the save and Teddy Long* came out to make a six man tag. 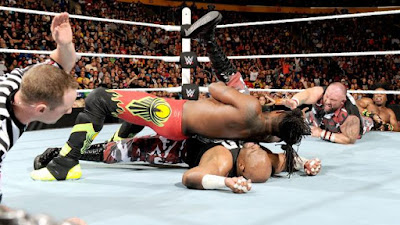 Perfectly acceptable six man tag, but too short to really stand out as anything special. Cena worked nicely as the face in peril, which psychologically made sense as he'd already worked the match with Xavier Woods. I'm also a massive mark for the quick tags and stomps thing that the New Day do. The Dudleyz offence works nicely for a hot tag, they've had a long time to perfect things like that, I suppose, but it's still feels exciting in 2015. The New Day picking up the sneaky victory would suggest that we'll be seeing The Dudley Boyz capture the tag team titles on Saturday night.

Winner - The New Day via pinfall (Kingston on Devon Dudley) in 6 minutes, 40 seconds.

The first trip backstage introduced someone who would be a fixture of this episode, Ashley from HR, who would be conducting a performance evaluation on Kane...erm

Staying backstage Dean Ambrose, Roman Reigns and Randy Orton had a chat about Reigns upcoming match with Bray Wyatt, there was some generic tension between Ambrose and Orton which felt a little forced.

Winner - The Big Show via pinfall in 2 minutes, 38 seconds.

Show went on to shill Saturday's match with Brock Lesnar and I still couldn't care less. 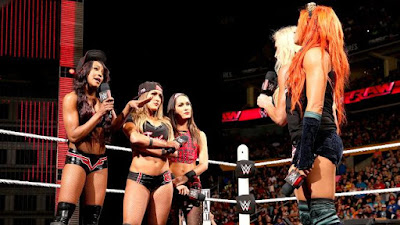 Not quite sure why this needed to be a Miz TV segment as The Miz quickly left the ring, but at least the focus was kept on the women here, as opposed to the last time they featured on the show. However, I'm not sure the Diva's made the best of the opportunity, with a lot of promos coming across as shouty, which I'm sure was supposed to be passion. Charlotte especially disappointed me, as I felt if she'd brought some levels into her delivery then the promo would have been much more effective. Also how stupid are Becky Lynch and Charlotte? Last week Paige cut a seething promo on the pair and now they're happy to team up with her...she definitely wasn't going to turn on them... The match was an improvement on the promo, with plenty of storyline advancement going on. Whilst Paige's turn was always going to happen, I wasn't expecting Natalya to come out and attempt to get involved and even if she has been shoe-horned into the story, it's good to see her back on TV. Nikki getting a pin on Charlotte so early in her title reign was a bit weird, especially with Nikki not needing a reason to get a title match.

Replays and stare-down after the bout, nothing out of the ordinary though, considering all that went down in the match.

A cheeky promo for WWE 2K16 aired, I think it's the first time that one of these has actually aired in full on the Sky Sports version of the feed (Feel free to correct me!)


Even more promos! Live at Madison Square Garden is on on Saturday, so WWE ran a look at previous matches between Big Show and Brock Lesnar, I still couldn't care less.

Backstage - Kane gave Seth Rollins the head of his statue in a box...what a time to be alive!

Strowman got the win, but that's all I know because Sky Sports' stream cut up.

JBL said something about European sport or something he'd read online that day...

Match 6 - Singles - Stardust vs. "The Man That Gravity Forgot" Neville

An absolute nothing match, as King Barrett turned up and twatted Neville with the Bullhamer.

Winner - Neville via disqualification (Outside interference) in 2 minutes, 34 seconds

Barrett hitting Stardust after the match made sense, due to Stardust attacking him the night after SummerSlam, but is Barrett heel or face now? 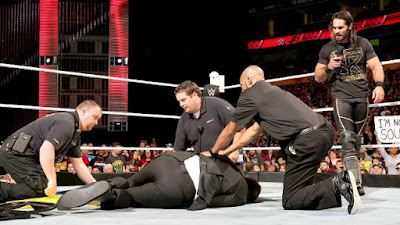 What a bizarre segment, this was? One of the longest non-interupted segments in recent memory, Kane's in-ring performance evaluation went for a staggering 17 minutes...17 minutes without an ad-break? On American TV? But was it actually good? Truth be told...I honestly don't know. The first section went a little bit too long for me, and was a little bit too predictable. It was always going to be the case that Ashley found Kane to be a good employee, as for some reason this WWE employee had no idea of the Big Red Monster's back story. Kane taking Rollins' attack, as he snapped after Ashley called him a bad employee (She just sauntered off from the ring), was a weird one. It was in a way uncomfortable to watch Kane not fight Rollins back, as The Man delivered a Pedigree followed by chair shots to the back and leg (the one injured by Brock Lesnar before Battleground, top marks for continuing to call back to that) 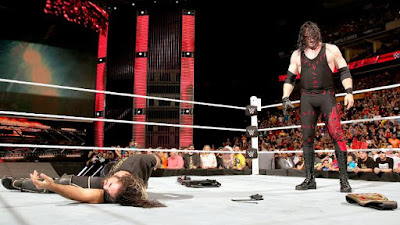 I have no idea, why but I was hooked for the last five or so minutes. If you think about it too much it falls apart (Kane transformed into the Demon version in the back of an Ambulance as steam came from it), but it was entertaining and even reminded me a little bit of the Sci-Fi elements from Lucha Underground. I popped big time when the Demon shook the injury out of his leg, as he could easily have not sold it at all when coming out of the ambulance, and that little touch made him look like a total bad-ass. His destruction of Rollins set their feud into the next gear, as it's been slow-burning for, at least, a year. As long as their rivalry is settled a Hell in a Cell and goes no further I'll be more than happy to see Kane step up into the WWE World Heavyweight Championship picture one more time.

The Buffalo Bills (who play American Football/Ice Hockey/Basketball/Baseball - please delete where appropriate) were at ringside and go told off by Bo Dallas for not winning enough, in his opinion.

Ryback was out on commentary, this is the show that dreams are made of.

Winner - Absolutely no one in 45 seconds

Owens and Rusev decided they'd rather beat up Ryback instead, The Big Guys' old pal Dolph Ziggler made the save, praise the lord for the Zig Zag man!

A promo video for Ellen DeGeneres #JustKeepDancing viral situation aired, with a number of WWE superstars, all good stuff to raise funds for paediatric cancer care. 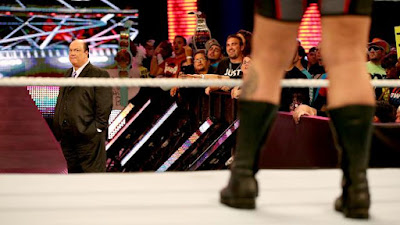 I was pretty buzzed when I saw Paul Heyman head out aaaannnd then I realised he was coming to talk about The Big Show. Literally nothing happened here, Heyman said some stuff, Big Show said some stuff, Heyman said a bit more, Show cut him off and Heyman walked out. I still couldn't have cared less about watching Big Show wrestle Brock Lesnar on Saturday. I'm certain that there are people who are excited to see the match and I'd love them to get in touch and tell me why @ATPWrestling. Hit me up on the Twittah.

With Michael Cole seemingly about to hyperventilate, Bray Wyatt walked out with Braun Strowman and Luke Harper, only to send them to the back.

Roman Reigns drive-by kick works nicely, it's impactful and cuts out the aftermath (which can be a bit of a let down), as an in to the ad break and after a short sequence that's exactly what happened. 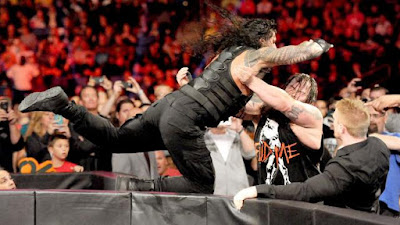 There were parts of this that I really enjoyed, bringing the best elements of their cracking Battleground bout together, going back and forth with apparent ease and at the decent pace for their size. The build-up to Reigns Superman Punch was done especially well. However, for a match of this length, their was a lot of lying around that I found hard to buy into and I know would have struggled to maintain the attention of a number of other viewers (something WWE can't afford at this point). There was time and scope to do a match more similiar to their previous encounter and put on a classic RAW bout, but this was only half of what the two can do. I understand that to a point, as the pair are being positioned for a marquee match at Hell in a Cell, but I'm sure many would have been even more willing to see/pay/sign-up to see another rematch if this had been fully allowed to spread it's wings.

Winner - No one via Double Countout in 13 minutes, 5 seconds (Televised: 9 minutes, 47 seconds)

The close of the show was electric, however, as the pair brawled on the outside with both getting big hits in before the end, in a nice change of pace from the regular RAW closing sequences.


What a very odd RAW that was? The pacing was completely different to what has been the norm over the last few years, with what felt like an ending in the middle of the show, lots of shorts one segment matches and then a very different main event and close. Roman Reigns and Bray Wyatt's bout and the aftermath would have to be the highlight of the entire show, but I also thought that John Cena's United States Championship match with Xavier Woods
was a sound encounter, whilst the end of the Kane and Seth Rollins segment also entertained.


You might have noticed that I couldn't care less about Big Show vs. Brock Lesnar? And the second hour was pretty throwaway, with an exception to the six woman tag, which had it's moments.


This clearly wasn't the greatest RAW there's ever been, but there was signs of promise in the pacing shuffle, and a few interesting threads going forward. Let's see where we are after Live at Madison Square Garden and re-evaluate.

*Teddy Long may or may not have came out
Posted by QTPW at 21:55