Just two week's removed from Night of Champions, WWE bring us Live from Madison Square Garden, a special WWE Network only event. Essentially, this is a broadcast house show, with the addition of the appearance of Brock Lesnar...but what does the actually look like? Is it worth checking out tomorrow night? Here's ATPW's look at it. 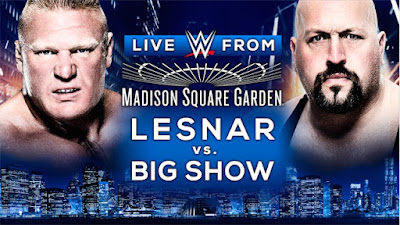 Man, I couldn't care less about Big Show vs. Brock Lesnar (hence why you'll find it somewhere further down this preview) but I am excited for this one. Let's skim past that Jericho has a title match, despite taking the pinfall in his last televised WWE bout, and think about just how good this match could be? Whilst Jericho's last feud with Bray Wyatt failed to deliver on the promise, Jericho did have a superb bout with Randy Orton, before his bout with Neville was one of the standout's of the Beast in the East PPV. There's little possibility of ring-rust, as he's been all over the house show circuit for the last year, so I'd expect that Jericho will be able to go move for move with the Intercontinental Champion.


Obviously, putting the title on the line could be where the match struggles the reach the upper echelon of this years bouts. That might be a strange thing to say as usually a title will elevate certain bouts, but in this case, I feel it makes it clear who would be walking out as the winner (Just as most house show title matches do) and therefore make it harder to buy into any of Jericho's near falls. Maybe WWE will throw a curve ball and have Jericho win, that would certainly get a huge reaction from MSG and could potentially lead to the rumoured feud between Jericho and Dean Ambrose. Perhaps we could even see Owens' current rival, Ryback, get involved? But I still think we'll see Owens walk out victorious after a hard-fought, physical bout.


Rollins and Cena always deliver, I can't remember these two ever having a bad match when lined up opposite together. Their bouts at SummerSlam and Night of Champions both delivered in terms of wrestling action, so without the need to particularly continue any on-going stories we should get their best match yet at Madison Square Garden. Add that we'll have a Steel Cage around the ring and non of the Authority shit that clouded Rollins last cage bout with Randy Orton in April and this bout should close out the show in style.


Similar to the Jericho vs. Owens bout, I'm pretty sure that we'll be seeing Cena walk out with the title, but we may get an added twist as having your World Heavyweight Champion job clean for the second match in a row would be a very strange move, even for WWE. I wouldn't be surprised if we get some involvement from Kane here. It'd be pretty cool to see the Big Red Monster emerge from under the ring with the Steel Cage still up or perhaps even just his music playing to give Cena the advantage...before Kane turns up to get him some of the Architect.


This is pretty uninspired choice of match, isn't it? I seem to be saying the same thing in each prediction over the last few months, Sheamus and Orton are more than capable inside the ring, but it's clear that neither is creatively inspired when facing each other. Therefore we've had a series of very similar matches across TV and PPV over the years. I don't know why WWE haven't slapped a gimmick on this and just had them have a New York Street Fight or something like that. Whack out a few weapons and freshen up the match, if this is the one that they want to have. It really doesn't matter who wins here, but seeing as it's technically a house show, Orton will be getting the win.


If you saw my RAW review then you'll know that I'm not interested in seeing this match. I think it's a real waste of one of Lesnar's singles matches (just like his contest with Kofi Kingston turned out to be on Beast in the East) when you've got a young and hungry roster, that would all benefit from a competitive loss to Lesnar, at the moment. I kind of get the idea that this might draw in a casual fan, but it's been a match that's been offered so many times (Only last year's Royal Rumble being the latest one) that I don't feel that there is any actual drawing power in it...other than the fact that it's Brock Lesnar in a match. I expect a watered down version of their Royal Rumble clash, going a little shorter and with a Big Show flurry but Lesnar mostly dominating before picking up the win. I'm not holding out for an Undertaker appearance or a Paul Heyman heel turn.


Tag Team Championship - The New Day vs. The Dudley Boyz


Any chance to see The New Day at the moment is a chance that must be taken. The lads on fire, with a string of impressively entertaining performances both in and out of the ring, whilst The Dudley Boyz offer an interesting foil. This is the most likely title change of the night for me, with the match being the most heavily promoted title fight on the card, as well as New York being the rumoured location of Dudleyville. I'm expect the crowd to be loud for this one, especially if it opens the show (which I would go for) with plenty of antics from the New Day and The Dudleys going nuts on their comeback. Also expect some angle to build for to a Tables Match in two weeks at Hell in a Cell. It's just a shame that both teams had to put Kane over on Smackdown this week, before such a big match.

My main complaint about Rusev and Ziggler's Night of Champions bout was the it lacked the drama level that the feud had provided, with the pair treading water until Summer Rae's interference. This is an opportunity to help provide that, without the need to drive the storyline. Whether they decide to do that or simply rehash the Night of Champions bout I'm really not sure, as it's clear that without Lana this pairing doesn't have any legs in terms of on-going feud. Rusev has proven in the past that's he's capable of top quality action and we know that Ziggler can tell a great story, so I'm hoping the pair go down that route, and work some psychology into the bout. Ziggler wins, because he's a babyface.


So, that's it for you. What do you reckon? Stacked card of action or a waste of time? Hit us up on Twitter and let us know if you're watching and what you make of the card.


Personally, I think there is a lot to look forward to in terms of in-ring action, even if there'll most likely be a lack of consequences in terms of what we see on RAW, with the exception of the two matches that have been promoted fully on television. Remember to have some fun with it while you're watching anyway, that's what wrestling is all about. See you here on Sunday for the review.
Posted by QTPW at 02:46