The penultimate Monday Night RAW before Hell in a Cell brought us a preview of the PPV with WWE World Heavyweight Champion Seth Rollins facing his opponent at the show, Kane in a Lumberjack match, with the main event getting plenty of build-up throughout the show. Elsewhere John Cena put the United States Championship on the line against Dolph Ziggler as part of the Open Challenge and The New Day battled Randy Orton and Dean Ambrose in tag team action, but would WWE pick up any momentum heading into the PPV? Let's have a look.

The opening backstage segment with Kane, set up the concept that Stephanie McMahon and Triple H wouldn't be on the show, due to a delayed plane...because the two people in charge only arrive a few hours before the show begins apparently... 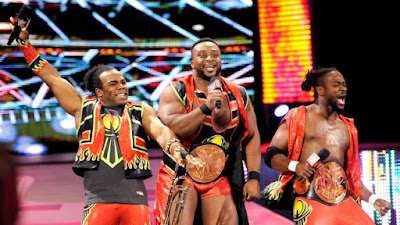 Kane was all over the show, with the Director of Operations Teddy Longing a match between The New Day and the odd couple tag team of Randy Orton and Dean Ambrose. This was probably one of the strongest parts of the show, with Orton and Ambrose having some nice back and forth on the mic and The New Day back to their usual fun selves. Kofi Kingston especially was on fire here, with some funny writing, as he listed Randy Orton's various factions and why the New Day were better than them. There was also the reveal that Orton and Ambrose would be facing Braun Strowman and Luke Harper of the Wyatt Family at Hell in a Cell on 23rd October. 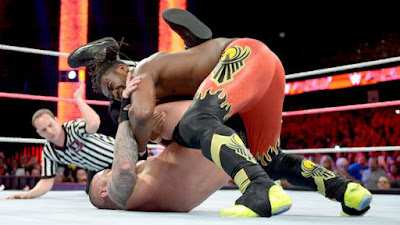 A solid tag team encounter, that did exactly what it needed to do. There was tension teased between Randy Orton and Dean Ambrose, carrying on from the previous segment, with the pair arguing at various points. Whilst this makes sense to do heading into Hell in a Cell, it perhaps felt a little forced, it would have been nice to have seen this narrative picked up earlier in the build to the PPV. It did also mean that Kofi Kingston and Big E got a little lost in the story of the bout from time to time/ However, it made me very happy to see The New Day pick up the win here, as I was convinced we'd see the Tag Team Champs lose to help put over Orton and Ambrose as a unit before the PPV. It appears that Kingston may be the wrestler equivalent of a bogey team for Randy Orton.


Clips from Sasha Banks and Bayley's Iron Man Match from NXT Takeover: Respect were shown, as an attempt to get the fans chanting "We Want Sasha", it worked pretty well.

This was a poor match, with a stupid gimmick of Brie Bella chanting "We Want Sasha" on the announce table as a "distraction" for Naomi, allowing Nikki to win with a forearm following up with a Rack Attack. It was probably the only time in the match the crowd refused to chant for Sasha Banks, it was pretty cringy to watch.


Things got worse with a thinly veiled advert for one of the shows sponsors, involving Byron Saxton and Paige. I felt embarrassed for them. 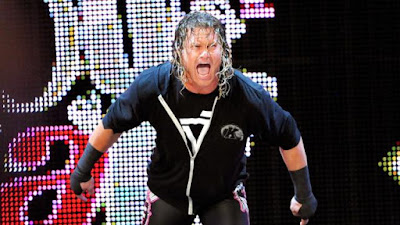 I was hoping that John Cena's Open Challenge would pick things back up for the show, but I had to wait a little bit, as Cena spent his promo desperately pandering to the Chicago crowd. His "Some places claim to be the most famous arena in the world, but there is only one Allstate Arena" promo didn't hit the spot for me. I'm sure it was great if you were in the arena and we were from Chicago, but on television it didn't translate very well. There was space for Cena to talk about The New Day's attack last week or even offer to face Dolph Ziggler who would have been his opponent if not for the New Day's attack last week, but that would make too much sense. Ziggler answered the challenge anyway, of course. 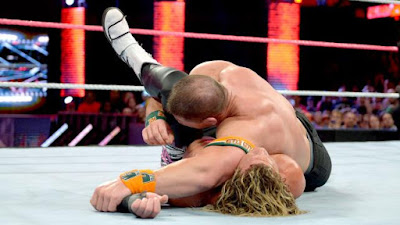 Easily, the match of the night, this was quality television bout with the pair going back and forth with some big moves and near falls. Some lovely transitions by the pair were the highlight from me, with the early STF attempt from Cena getting switched into a Sleeper Hold by Ziggler being done especially well. Cena attempting to hit the AA at various points put Ziggler over strong as he escaped time after time, including an eye-rake with Michael Cole emphasising the Show-Off's desperation well from the commentary table. The crowd even whipped out a small "This is Awesome" chant, and whilst I wouldn't go as far as to call it Awesome, it was definitely an enjoyable watch from start to finish and hopefully we'll get to see these two battle it out again soon, as there's potential for them to one up this match on PPV and with a strong story behind it.


Backstage, Kane chatting away to the Authority on the phone was a weird segment, with Stephanie McMahon's outbursts at various airplane staff being a needless and unfunny addition.


Match 4
Tag Team
The Ascension
vs.
The Dudley Boyz


Squashy McSquash. The Dudley Boyz whipping out a Doomsday Device was a nice nod to Chicago's favourite tag team the Road Warriors.


There were flashes of brilliance in this match, but it was 10, 15 or even 20 minutes short of reaching it's full potential, with a shit flash finish. A big waste of four talented European workers. 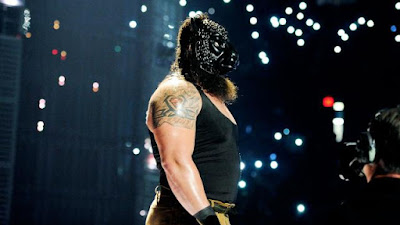 Roman Reigns' Bray Wyatt focused promo was so dull that I ended up watching the 1993 Doctor Who Children in Need special, Dimensions in Time, instead. I'm usually a big supporter of Reigns, but his mic work is not up to scratch of someone performing at this level. Everything was all on one level and the material he was given was unimaginative to start with. Even when referring to the crowd chanting "Boring" at him, he was devoid of any personality. Why WWE hasn't given him a manager or anyone who will talk for him, I really don't know. It worked for Brock Lesnar, why wouldn't it work for Reigns? A 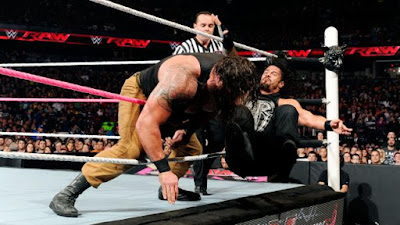 This was super basic encounter, with Reigns taking a beating from Strowman before making a comeback. Reigns did his best with the green-Strowman and the match was actually watchable, without ever becoming what anything close to resembling a good match. The finish of Strowman being unable to make it into the ring after being thrown into the announce table was an interesting way to protect Strowman put give Reigns momentum heading into his match with Wyatt at Hell in a Cell. I imagine we'll see Reigns face Luke Harper next week, which has potential to be a much better encounter.


More phone stuff backstage with Kane, with Triple H working nicely as the foil for Kane's shenanigans. Why this was supposed to make root for Kane later tonight, or more importantly at Hell in a Cell, I have no idea.

I couldn't tell you how good this match was, because I was too busy getting all wrapped up in the stupidity that is the Rusev, Lana and Summer Rae story. Rusev's real life engagement to Lana was bought up throughout on commentary, despite Rae proposing to the Bulgarian Brute the week before on RAW.

Fucking hell there was more of this God forsaken storyline to follow, with Summer Rae turning on Rusev because of the engagement to Lana. Her promo felt so disingenuous that I honestly stopped listening to her, until she went and swore. You rebel, Summer!


An enjoyable contest, it was a shame that this match only got just under four minutes. Kalisto and Owens connected well in the ring, with a appreciative crowd (even if Owens still struggles for heat in places like Chicago) and strong finish.


Another shoddy Diva's match here, with little to no emphasis put on the wrestling, which was a real shame considering there was some real talent in the bout. A missile dropkick getting the win for Brie, didn't feel like the finish, despite Natalya and Paige's argument at ringside allowing for the distraction.

Another backstage skit with Kane, lead to Stephanie McMahon banning Kane from competing in the main event with Seth Rollins made it super clear what was going to happen later on in the evening. Rollins' attempting to suck up to The Big Show was, at least, mildly amusing, even if it made absolutely no sense for Big Show to not be interested in helping Rollins in the Lumberjack match.


The exact same promo for The Undertaker and Brock Lesnar's Hell in a Cell match aired. I get that many viewers might not have been watching earlier, but was there no something else they could have aired to promote the PPV instead?


Despite The Authority stating Kane couldn't be in the main event, he was anyway. He came out in the mask as "The Demon", the problem was that Stephanie McMahon had explicitly said "Kane" couldn't compete, not just "Corporate" Kane, so it made very little sense. 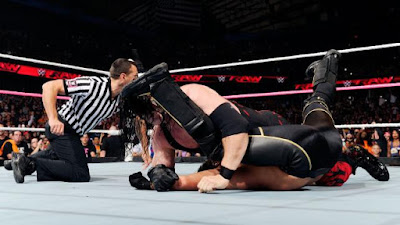 Possibly as a result of what I mentioned earlier, the crowd were much more interested in getting behind Rollins than they were Kane. The WWE crowd has been trained for years that stacking the deck against the Champion is a heel move...so they rightly chanted "Let's Go Rollins". The bout itself wasn't bad at all, making decent use of the Lumberjacks, with both Kane and Rollins having run-ins with them. The New Day getting a big spotlight again in a main event, leading a heel attack on Kane (perhaps the only indication that he's supposed to be a babyface) before Kane sat up (before a Big E splash). The back and forth finish with Kane escaping a Pedigree to hit a Tombstone Piledriver was done nicely, and means the fans have a reason to believe Rollins could lose the title at Hell in a Cell. It's a shame that the World Heavyweight Champion had to lose clean (again) in the process. 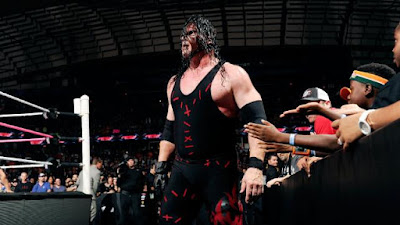 
This was an improvement on last week, but not by much. John Cena and Dolph Ziggler's United States Championship match was clearly the best contest of the night, with the pair just about saving the show from falling to new depths. However, Cena's pre-match speech didn't hit the spot, although it was decidedly better than Roman Reigns effort later on, and Reigns' match with Braun Strowman didn't help either. The booking of Kane as a babyface has been completely miss handled and affect his encounter with Seth Rollins, just two weeks before they tangled over the World Heavyweight title at Hell in a Cell.


Plenty of matches with potential (Neville/Cesaro vs. Sheamus/Barrett, Owens vs. Kalisto) were allowed to run way too short, whilst both Diva's match were handed awful gimmicky interferences that did nothing for those in the matches. A spell of short matches and Kane backstage skits harmed the final hour also. Lets ignore Rusev and Summer Rae's segment and pretend it never happened.


Here's hoping for a much better go-home show for Hell in a Cell next week, with Ric Flair, Brock Lesnar, The Undertaker and Shawn Michaels all scheduled to appear.
Posted by QTPW at 23:07