Just two days removed from Live from MSG: Lesnar vs. Big Show it's time for WWE to go full steam ahead toward Hell in a Cell, with just under three weeks until the PPV. The company promoted John Cena's United States Championship Open Challenge heavily throughout the show, with the challenge taking up the main event segment. Paul Heyman and Brock Lesnar set their sites on The Undertaker and Kane and Seth Rollins' issues furthered, but was the show any good? Let's have a look. 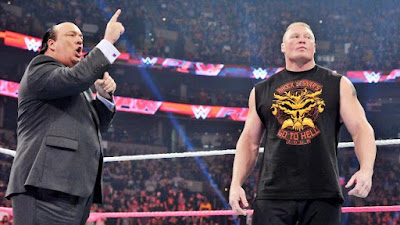 Paul Heyman and Brock Lesnar opened the show, with Heyman getting let lose on the microphone. The first half of the segment focusing on Lesnar's previous matches with the Undertaker meant that there were a lot of recaps, which felt a bit tedious to me, but I can understand why it was done to keep the casual fan up to date with all the goings on between Lesnar and Undertaker over the last year and a half. I did find Heyman making a point of saying that Hell in a Cell would be the last match between Lesnar and Taker to be rather interesting, as it was purposefully giving the match another selling point. Heyman said this a number of times throughout his promo, if you didn't know this was going to be the last match of the series by the end of this then there really is no hope for you. 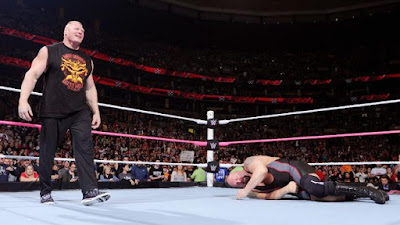 Who came out to interrupt Heyman? Only the bloody Big Show! You know, the man who lost to Lesnar in less than five minutes the other night. Show said something about Lesnar losing to The Undertaker, like a twelve year-old school girl, and then got battered by the beast. Big Show is pretty much done now, if he wasn't already. Obviously losing to Brock Lesnar isn't a career killer, but Show has looked a complete idiot two times in a row and still no one could give a fuck about him. I'm sure even his wife changes the channel when his big mug comes on the telly. 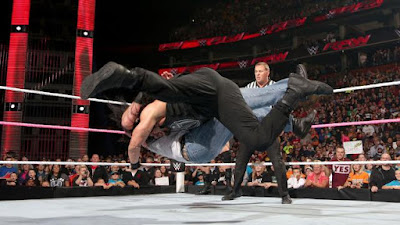 I found this one really hard to get into, because it was split up with two commercial breaks in between. The action felt a little segmented by this and the flow of the match on television was hard to get into. There was some action, especially in the closing stretch when the babyface team managed to overcome the Wyatts with the teams going back and forth with a number of cool spots. The false finish with Luke Harper being able to nail Roman Reigns with a superkick was particularly well done. It was a shame to see Harper take the pinfall off a Reigns spear however, as he looked the brightest of his team, but it did give Reigns some momentum heading into Hell in a Cell. His post-match promo, not so much.


Singles
"The Celtic Warrior" Sheamus vs. "The Man That Gravity Forgot" Sheamus


Squashy McSquash, because King Barrett got all involved. 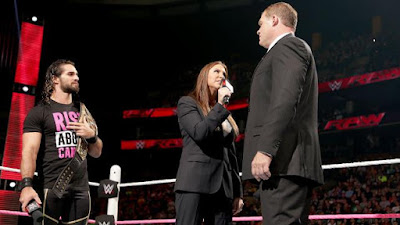 Kane and Seth Rollins in-ring segment was a rather odd one. It didn't feel like a segment that was there to push a WWE World Heavyweight Championship match, just three weeks away. Admittedly, there were some funny moments like Rollins referring to Kane's "deflated balls", and Rollins did manage to get decent amount of heat by bringing up the local football team, but the tone was all over the place and I couldn't have cared less about a Rollins vs. Kane match at this point. Stephanie McMahon's involvement, allowing Kane to team with Rollins later on, and announcing that if the Demon couldn't beat Rollins at Hell in a Cell then Corporate Kane would lose his job, seemed mainly designed for her to get the cheap pop by again talking about the local football team. 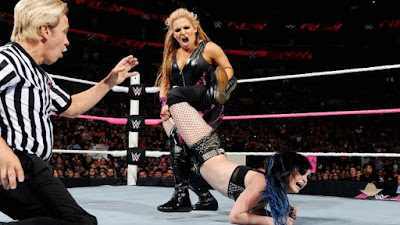 The action here was fairly sloppy with the pair not looking quite like they knew what was going on, on a number of occasions. I think, I had much higher expectations than I would have a few months ago, because of how Diva's have been treated recently and how adamant people were that Natalya should have been part of the goings on. The commentary team completely missed Paige hitting the Paige Turner didn't help one of the matches near falls, either. The crowd was subdued throughout with neither performer able to get them warmed up, but at least Natalya getting the submission win opens up a few new matches in the next few weeks.

Another squash, there was at least a small come-back from Sin Cara. Ryback making the save for Kalisto after the bout, did more for their fued than Ryback's dodgy promo earlier in the night did.


"The Director of Operations" Kane & Seth Rollins vs. The Dudley Boyz 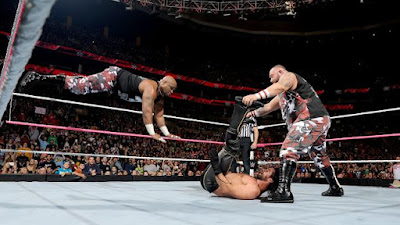 The Rollins and Kane stuff has gotten stale, very very quickly. Pulling the same stuff on Raw and Smackdown tends to do that. This whole match was focused around Rollins trying to keep Kane at ringside and Kane trying to fuck off to the back. If Kane wanted to hurt Rollins, why did he bother offering himself up as his partner in the first place? Send El Torito out with him, have The Dudley Boyz batter him and then Tombstone the fuck out of that two-toned weasel. The whole thing was over thought and convoluted, with a pay-off that you could see coming a mile off. Bubba Ray and D-Von could have been absolutely anyone in there, because most of the match they were a side-show to Kane and Rollins shenanigans.

Winners
The Dudley Boyz via Disqualification (foriegn object use by Rollins) in 13 minutes, 26 seconds. 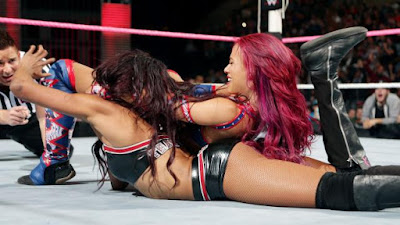 A fine Diva's Tag Team bout, I think I preferred this one over the earlier Divas' singles match. The reason for this is that the crowd was very responsive to hometown girl Sasha Banks, and created a smashing soundscape for what was actually a fairly simple six person tag. Naomi worked as the face in peril for this one, and whilst as a television viewer it felt a little weird for the usually heel character to be in such a position, but with the crowd desperate to see Sasha get into the match, it actually worked quite well. The quick hot tag and melee resulting Sasha getting the tap out victory on Alicia Fox, was well done and the focus given to her match with Bayley on Wednesday at NXT Takeover: Respect also made me very happy. 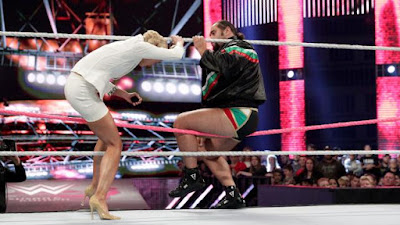 Oh man, this segment was so, so bad. Lana proposed to Rusev and The Bulgarian Brute said yes...but only one he has a championship. Lana looked upset but continued on anyway. It went on and on and on and I couldn't get my head around. I just wanted it to end. What am I supposed to feel? Is there a match I'm supposed to be looking forward to because of this? Am I supposed to buzzing to find out what happen next and tune in next week? Because I didn't feel any of that. Did anyone else? Either way it's completely crushed Rusev's momentum, a whole lot more than losing his feud to John Cena. 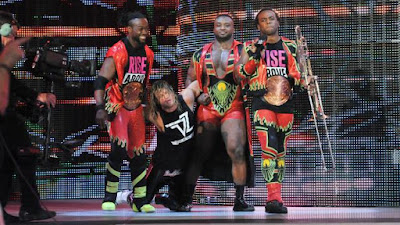 Talking of John Cena, it was his United States Championship Open Challenge that would end the show. It was strange that Michael Cole kept pushing a variety of names who could potentially answer the challenge throughout the show. I'm sure this was done to get people to tune in later on, but it was so heavy handed in it's attempted that it made Cole seem a bit desperate. One name that was mentioned throughout the show was Dolph Ziggler, so when Ziggler's music hit it was no surprise. It was a swerve however when The New Day walked out, dragging an unconscious Ziggler with them. It didn't feel in keeping with their characters to have Ziggler like that and the image jarred just a little with me. If I'd have tuned in specifically to see Cena's open challenge and been offered Ziggler vs. Cena and then had that switched to Cena vs. Big E, then I'd have changed the channel. 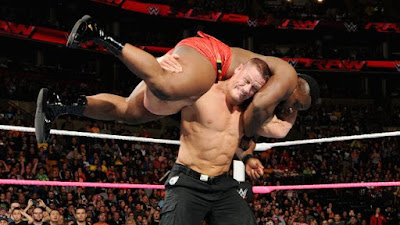 If I'd have decided to stick around, I think I might have tuned out a little bit after the match started. That's maybe a little harsh, because the match wasn't "bad" and everything was well executed, but it just didn't interest me at all. Big E repeatedly hit splashes on Cena, being unable to put him away at numerous times, even his splash onto the apron didn't look as good as it usually did, before some New Day antics lead to Cena hitting an AA and winning the match. I'm reasonably sure the AA was Cena's only offensive move, after taking a battering from Big E. I've always thought Big E had a lot of potential, but the lay-out and structure of this match did nothing for him at all. 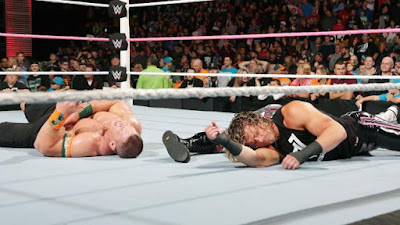 One of the weirdest show closes I've seen in quite a while then occurred. Dolph Ziggler came to save John Cena from the New Day, accidentally superkicked John Cena, the Dudley Boyz came to make the save, but got beaten down also, with the New Day ending the show standing tall. I think the WWE completely missed why The New Day were popular and have given them an edge that no one wanted to see them get. Who knows what the group will be doing next week?


This really was a terrible episode of Monday Night RAW. Whilst the opening segment was okay, with the presence of Brock Lesnar and Paul Heyman always lifting whatever they're involved in, it certainly wasn't their best appearance and the show got steadily worse from there. The Six man tag was probably the best match of the night, but it was nothing to go out of your way to see. Rusev and Summer Rae's segment takes the crown for the worst part of the evening, whilst the booking of the main event, as well as the repetition of Kane and Seth Rollins feud, also worked to pull the score down.


This show will do nothing to help the promotions ailing television ratings.
Posted by QTPW at 02:21