With Hell in a Cell now in the rear view mirror, WWE headed towards it's biggest PPV of the Autumn, Survivor Series. With a #1 Contenders tournament involving four semi-finals and a Fatal Four-Way main event, involving Alberto Del Rio, Big E, Cesaro, Dolph Ziggler,  Kevin Owens, Kofi Kingston, Neville and Roman Reigns, would there be enough quality to keep the three hours entertaining? Let's have look! 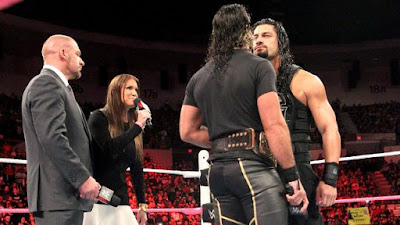 To the surprise of no-one, the Authority kicked off the show with an exposition laden promo, explaining the results of Hell in a Cell, and putting over Seth Rollins victory over Kane, who is now removed as the Director of Operations. The wordy explanations continued, with Triple H and Stephanie McMahon shifting gears and creating an eight-man tournament to find the New number One contenders tournament featuring the winners from Hell in a Cell. Cesaro, Dolph Ziggler, Neville (who won the Kick-Off show), Alberto Del Rio, Roman Reigns, Big E, Kofi Kingston and Kevin Owens would be our eight competitors, Brock Lesnar didn't fancy it, obviously. I liked the idea of the tournament straight away, especially as it rewarded those who won the previous night, which in kayfabe is what you'd expect to happen. However, for me this opening segment was way too wordy and perhaps wasn't even needed at all, especially having Roman Reigns interrupt the promo, it simply sign posted his victory later in the night even more. Heading straight into the action would have given a completely different feel to the show. 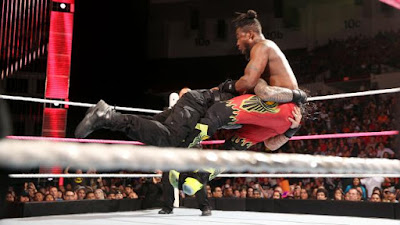 A fine opening TV bout, Reigns and Kingston worked well together, with Big E on the outside also playing a bit part in the action. The story wrote itself really, with the Tag Team Champions stacking the deck against Reigns, with a series of underhanded tactics to keep control of the bout, before The Juggernaut launched his comeback, securing the victory with a Spear. A simple bout, but done well, Kofi Kingston made Roman Reigns look great, whilst Kingston won't be harmed by suffering a loss to Reigns, due to his status as a tag team wrestler at the moment. Even, the fact that Reigns managed to overcome despite Big E helping to stack the odds, doesn't harm The New Day as it can easily be argued that Big E had one eye on his tournament match later in the night.


Little bit extra - There could have been a little bit more made about Reigns' victory the night before, having Reigns wrestle whilst showing the effects of the Hell in a Cell match and still win, would surely put him over even more? 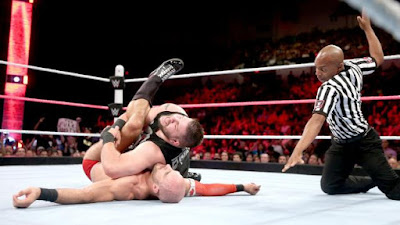 A cracking encounter for television, you should know that putting these two together and giving them a solid ten minutes, that you'll be entertained from start to finish. Whilst Owens dominated most of the match and it took the crowd a little to get into the action, Cesaro's flurries of action were placed nicely and San Diego began to warm up as the bout went on. The sequence of action that started with Owens denied the crowd the chance to see the Cesaro Swing, was the highlight for me. WWE continues the push to get Owens some heat with the audience (Even the biggest Owens fan has to admit he's struggled to garner heat, but a poorly chosen feud with Ryback might have something to do with that) by having the Canadian cheat to win once again, although he was still able to hit a huge Pop-Up Powerbomb to claim the victory. 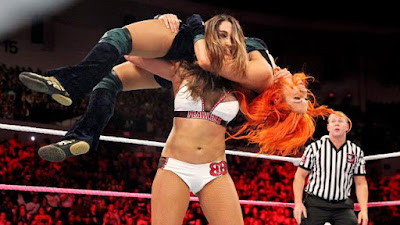 What a waste of time this was? How stupid did Becky Lynch and Charlotte look, by allowing Paige to team with them? She's spent weeks cutting promos on them and leaving them high and dry. Also how many times have these two teams faced each other on TV? The match was fine but I didn't care. Nikki's lost twice in a row to Charlotte so that was clearly done and with the crowd so hot for Sasha Banks at the moment, Team B.A.D. could have offered something, at least, a little different here. Nikki pinning Becky Lynch, despite clearly being cycled out of the title picture for now, also seemed like an odd piece of booking.

Paige's turn happening last month seemed to have been simply to add a little shock value to the post SummerSlam edition of RAW, but she's trod water for weeks, WWE would have been better of holding her turn for this show, as it least her attack on Becky and Charlotte would have some kind impact. 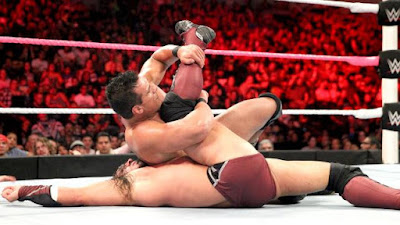 A massive improvement on Del Rio's return match opposite John Cena at Hell in a Cell, even if the new partnership with Zeb Colter is still a little tenuous...Mex-America? Come on. Neville worked as a perfect babyface for Del Rio, with the pairs offence complementing each others well. The action was crisp and had purpose, with both men working hard for one another through, in front of an appreciate crowd. I'm digging having Del Rio win his matches in different way and his diving Double Stomp with Neville in tree of woe looked great, a much more convincing finish than the Superkick used in his bout the night before. The United States and Intercontinental Champions picking up victories made me happy, as twelve months ago, you just know they'd have been used to put someone else over! Here's hoping Cesaro and Neville are rewarded for their unselfish performances. 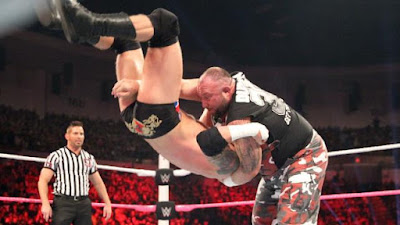 The commentary team mentioned that these guys were all the "losers" from last night...so why exactly should I give a fuck? Could have been spun potentially, but nah. I honestly didn't pay much attention, but it was your generic short, forgettable six man tag. Devon as face in peril, hot tag to Ryback, Barrett stole the win on Devon. The three meat hooks from Big Hungry was cool, as was the former Intercontinental Champion getting involved with The Dudley Boyz signature "Wassup" but that was about all this had to offer. Hopefully WWE decides what it's doing with it's trio of Europeans, especially current Money in the Bank holder Sheamus!
Winners - Sheamus, King Barrett & Rusev via pinfall (Barrett on Devon) in 6 minutes, 11 seconds. 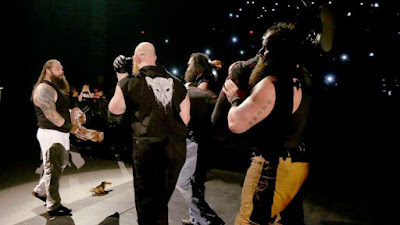 Whilst I'll admit that Bray Wyatt's promo on The Undertaker flew straight over my head, Kane confronting him and the subsequent appearance of The Wyatt Family didn't. I find Wyatt captivating as a character, and find myself unable to take my eyes off him when he is talking, however, I very rarely come away with anything that he has said. Maybe it's his very different promo style and perhaps having him uncharacteristically cutting it out in the ring had an effect also. Erick Rowan, Luke Harper and Braun Strowman battering the Demon (I guess the whole Corporate/Demon thing has been completely dropped now) was hugely entertaining, with the trio, along with Wyatt all looking superb. With Kane exiting the same way as The Undertaker the night previously things are getting very interesting heading toward Survivor Series on 22nd November (with just three editions of RAW to go!) 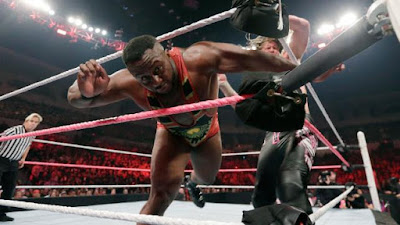 The last in four semi-final's Big E got a chance to perform at a level that he's not often been allowed to as a singles wrestler since departing NXT back in June 2013. Although it never felt like Big E was going to pick up the victory, mainly due to the likelihood that WWE would even the field of babyfaces and heels for the main event, but there was still enough here to keep me entertained. Ziggler hurting his arm after hitting the ringpost was sold well, and would add something to the main event also. At times, there was a little too much focus on Tyler Breeze and Summer Rae who sat at ringside for my liking, and even Breeze eating grapes in a fluffy seat gave me a good laugh, I'd have preferred the focus stay on the wrestling as the other bouts had been afforded. 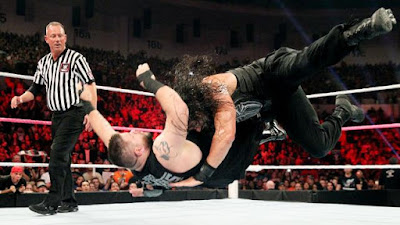 Even though there was only ever going to be one winner coming out of this win, the four performers still managed to put on a top-quality RAW main event. Even if the logic of the new Mex-America member Alberto Del Rio partnering with French Canadian Kevin Owens for most of the match wasn't entirely convincing, it did at least give the bout an easy to follow dynamic and having the pair working over either Reigns or Ziggler at seperate times presented a nice dynamic to start. The crowd was red hot, Seth Rollins was on fire on commentary to complement the action as things built and built and built towards the conclusion. The sequence involving the Tower of Doom tease was superb, with all four men combining to pull off a speedy slice of action, making the most of the Fatal Fourway concept. Although the bout never managed to convince me that Roman Reigns wasn't going to win, it did allow everyone the chance to shine, whilst simultaneously putting over the Juggernaut as someone who could wrestle the title away from Rollins. The Superman Punch as a reversal for Owens Pop-Up Powerbomb attempt was world-class exchange, with Reigns Spear then giving him the victory. 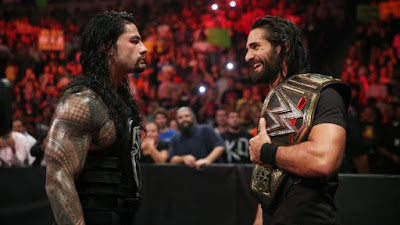 After Sting and Kane have recieved World Heavyweight Championship matches just because reasons, it was refreshing to see a tournament set up with the winners from the previous night involved. Wins on big events should be rewarded in logical booking, it makes a cheater even more frustrating and allows fans to feel like getting behind a babyface will be worthwhile. It also gave Roman Reigns a solid foundation heading into Survivor Series, and made him look like a beast, especially after winning his Hell in a Cell bout the night before. Everyone that took place in the Fatal Fourway seemed to be elevated for having taken part in it.

Outside the tournament, I thought the match and storylines were lacking, with Paige finally turn on Charlotte and Becky Lynch lacking any punch after the flip flopping of the last few weeks, whilst the six man tag lacked a purpose. At least, The Wyatt Family's apparent feud with The Brothers of Destruction is becoming more intriguing by the hour. Whether WWE can keep that moment over the next few weeks, I guess we'll have to wait and see.
Posted by QTPW at 22:28