WWE SummerSlam 2015 is out on DVD and Blu-Ray now from wwedvd.co.uk and all other reputable DVD stockists. Broadcast live on PPV (and on the WWE Network) from the Barclays Center in Brooklyn, New York, USA on 23rd August 2015. The four hour show features The Undertaker trying to get revenge on Brock Lesnar for breaking the streak at WrestleMania XXX in the main event. Elsewhere Seth Rollins and John Cena put their WWE World Heavyweight and United States Championships respectively on the line in a Title vs. Title clash, Team PCB, Team Bella and Team B.A.D. going at it in a Elimination encounter, Kevin Owens facing Cesaro and six more matches! Dean Ambrose, Neville, The Lucha Dragons, Randy Orton and Dolph Ziggler are all also featured. The Blu-Ray version includes over twenty minutes of special features, but no extra matches. Michael Cole, Jerry Lawler and John "Bradshaw" Layfield provide the commentary. 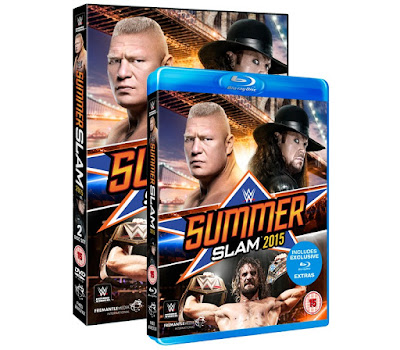 SummerSlam host, Jon Stewart opens the show, with 3 time WWE World Heavyweight Champion, Mick Foley, joining him in a chuckle-worthy skit. Despite Sheamus having a tonne of heat early doors, the crowd quickly get's bored of his distinctly average opener with Randy Orton. A much better choice for an opener would have been the Fatal Fourway for the WWE Tag Team Championships, with champions The Prime Time Players (Darren Young & Titus O'Neil), The New Day (Big E & Kofi Kingston) (with Xavier Woods), The Lucha Dragons (Kalisto & Sin Cara) and Los Matadores (Diego & Fernando) (with El Torito) putting on a pacy bout that has the Barclays Center rocking. Dolph Ziggler (with Lana) and Rusev (with Summer Rae) do the best they can to make their encounter, but with the worst finish of the evening, it's still a massive let down that the crowd rightly shit on. 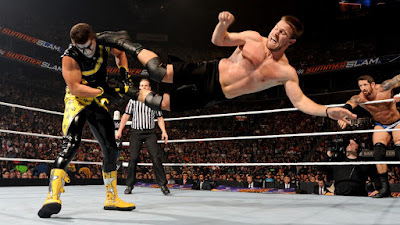 There's a lot of fun to be had when Arrow and Teenage Mutant Ninja Turtles star, Stephen Amell teams with Neville to take on King Barrett and Stardust, with the three wrestlers helping Amell look much more experienced than he is. Ryback's WWE Intercontinental Championship defence against The Miz and The Big Show is kept short and full of action, although the finish pales in comparison to a couple of the falsies used. Whilst The Wyatt Family's Bray Wyatt and Luke Harper teaming up against former Shield buddies Dean Ambrose and Roman Reigns has a frenetic start, the later two thirds of booking lead to a rather disappointing conclusion. 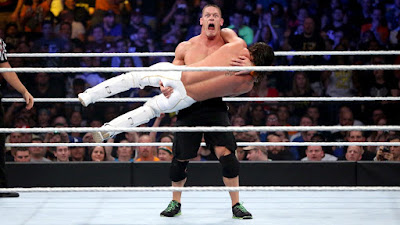 With the WWE World Heavyweight and United States Championships on the line, Seth Rollins and John Cena work well together to produce a terrific contest. Whilst the finish isn't particularly satisfying (noticing a theme yet?), the two reversing roles to satisfy the racous anti-Cena crowd, stringing together sublime sequences and piling on the drama make this arguably the best title defence of Rollins time as champion. Unfortunately, the three way tag team bout from PCB (Paige, Charlotte & Becky Lynch), Team Bella (Alicia Fox, Brie & Nikki Bella) and Team B.A.D. (Naomi, Sasha Banks & Tamina Snuka) can't keep things up, being nowhere near as good as it needed to be to justify the "Diva's Revolution" tag. There are a few saving graces like a brilliant dives sequence, but with a messy narrative and a flat finish it's difficult to see what the actual idea here was. 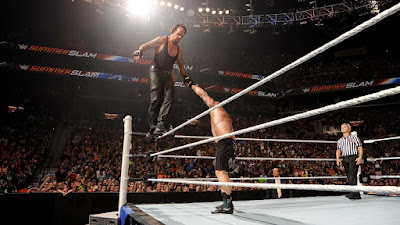 
When I saw a RAW segment with The Undertaker and Brock Lesnar on the Blu-Ray Exclusives, I was excited to watch Taker and Lesnar's pull apart brawl again...unfortunately this is their confronation from the RAW before SummerSlam and whilst it does feature some wonderful work from Paul Heyman, it isn't quite what I was hoping for. 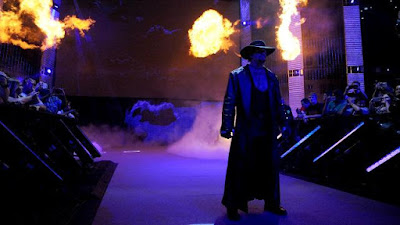 This is the 2nd highest rating I've given out for a WWE PPV this year (although WrestleMania 31 didn't receive a rating) behind Money in the Bank, so if you're looking to get a 2015 PPV on Blu-Ray or DVD then you can't do much better than SummerSlam. The fact that the show is Four hours as opposed to three, means that you're getting even more quality for your money. That's always a good thing!


Two great matches in Undertaker/Lesnar and Cena/Rollins, whilst there's plenty to enjoy on the undercard also, with the Four Way Tag and Owens/Cesaro standing out as the strongest amongst the pack.
Posted by QTPW at 00:49