After a flat episode last week in Manchester, could WWE step up their game on the go-home show for Survivor Series? With Paige and Charlotte's Divas Championship contract signing, The Brothers of Destruction opening the show, Cesaro and Roman Reigns battling in a World Heavyweight Championship quarter final and a lot more over the three hour show from the Bon Secours Wellness Arena, how did WWE do as we head towards one of their biggest events of the year...lets take a look.


Fast-Forward...The commentary team laying out the four World Heavyweight Championship Tournament Quarter Finals was a quaint way to start Monday Night RAW into 2015, but it gave the viewer a complete view of what to expect over the next three hours... 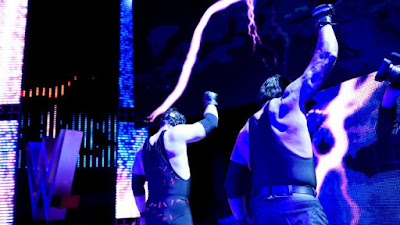 The Brothers of Destruction ended last week's RAW in Manchester and this week they got to open the show. The Greenville, South Carolina crowd were popping loud for Taker's BONG at the start of his music was a cool moment and The Deadman managed to keep the entire crowd hanging onto his every word, even if the promo was full of mystical gubbins. Bray Wyatt's reply was a similar effort, and through some loud "What?" chants, the Eater of Worlds did manage to pull out a couple of cracking lines, like "After Survivor Series you'll just be remembered as the brothers that I destroyed". The Druids turning on Undertaker and appearing with sheep masks on was a nice visual, even if the attack on B.o.D was a little flat. By the end of the segment, I was much more interested in a clash between B.o.D. and two members of The Wyatt Family than I was previously and that's exactly how a segment like this should make one feel. Here's hoping the match can live up to all the special effects and pyro.


Fast-Forward...The commentary team did a strong job of putting over the previous encounters of Neville and Kevin Owens as we headed into the first match of the night... 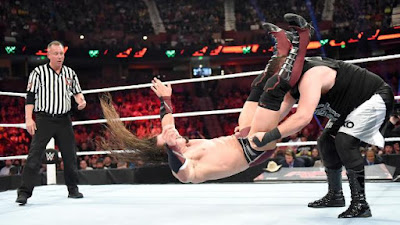 This was quality opening contest, that set the tone for the type of show we'd be getting this evening nicely. With a hot crowd that quickly sided with Neville, the pair worked well together to create a number of creative sequences, the Pop-Up Powerbomb escaped into a Reverse Rana standing out in particular. With an on-going story of Neville attempting to put Owens away with the Red Arrow and never quite managing to hit it, despite the crowd willing him on all the way, was easy to follow and the face/heel dynamic kept things simple but effective throughout. There was space perhaps for a little extra time to really up the ante and tell an even stronger story, but as Quarter Final for the World Heavyweight Championship, both men came out looking better than they came in.


Fast-Forward...During Owens celebration, Michael Cole ran us through the brackets for the tournament, a site that we'd become all too familar with by the end of the night...The coverage of Seth Rollins surgery was a good tie-in with the tournament and hopefully we'll see The Architect back in the ring sooner rather than later...R-Truth was stupidly over in his entrance, but Byron Saxton joining in on the "What's Up?" chant was cringey...Truth's contest with Tyler Breeze did a lot in a short space of time, with Prince Pretty picking up the win with the Beauty Shot...The announcers desk was at it again during Dolph Ziggler and Dean Ambrose's entrance, putting over each man's relationship with the World Heavyweight Championship well. 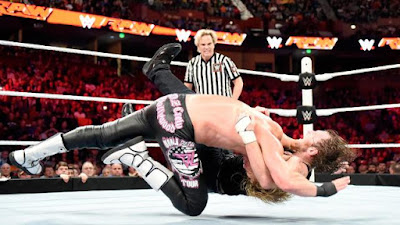 This could have been a bit of a disaster. By that I'm certainly not doubting either man's abilities in the ring, but judging by the crowd's reactions to the first to match, Greenville seems like a town that loves cheering their babyfaces, so I was a little tentative about how the sound scape of the bout would be. I needn't have worried, Ambrose and Ziggler held the crowd throughout the 16 minute contest. They worked an intriguingly slow pace early doors, adding layers of complexity into the bout as things progressed, gathering up more content like a snowball rolling down a hill. Back and forth with lots of near falls and a split crowd, you can't ask much more for a television contest, can you? Like the previous tournament bout, both men came out of the contest all the better for being a part of it, even if Ziggler did the job clean following Dirty Deeds.


Fast-Forward...Ambrose's post match promo was blisteringly captivating and his promise of "putting Michael Cole in a fish tank" if he won the WWE World Heavyweight Championship on Sunday should surely be enough for anyone to will on the Lunatic Fringe... 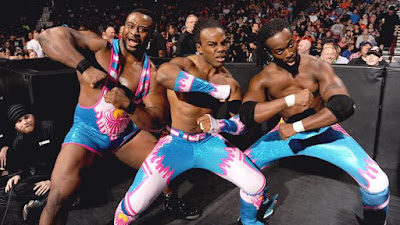 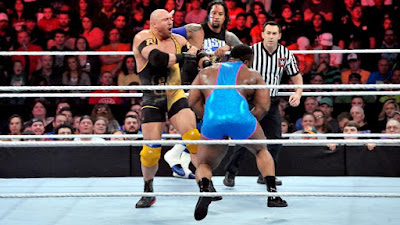 This was an enjoyable six man tag team contest, but unfortunately we only got half of the bout. The New Day continued to work their arses off, with plenty of trash-talking as they dominated Jey Uso and worked quick tags. During the old school heel antics, the crowd got more and more behind Ryback, who was in desperate need of a rebuild following having to job to Kalisto on Smackdown. I'd suggest that because of this, WWE decided to have Ryback run in to take out the New Day after one trick too many, but it did leave a match that seemed to be heading in the right direction feeling rather flat.


Fast-Forward....Ryback destroying The New Day was again a very transparent way to protect the former Intercontinental Champion, but I'm not sure it should have been done at the expense of the tag champs...Michael Cole and co pushed the benefits of watching Survivor Series on the WWE Network as opposed to PPV, a real treat for wrestling fans...Triple H and Cesaro's backstage segment was an interesting one, with Trips seemingly push The Swiss Superman on to "grab the brass ring"...Roman Reigns pre-match promo was the shits with the Samoan seemingly attempting to destroy the English language... 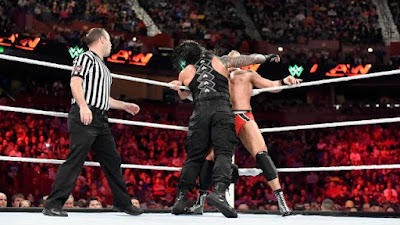 I was surprised to see this not go on last, seeing how strongly Roman Reigns has been pushed on television over the last month. However, it certainly didn't effect the tie, as both men worked hard for each and put on another cracking quarter final contest. Cesaro looked great early door with a series of quick reversals and movements, that made him look more than capable of hanging with now bonafide main eventer Reigns. If you're not convinced by Reigns as an in-ring performers yet, there's probably little I can do here, but the selling of his injured arm, after hitting the ring post, brought an extra dimension to things. It certainly turned Cesaro's Sharpshooter transitioned into a Crossface look even more special. The third contest in a row where both men managed to come out of the match looking better than they did going in. 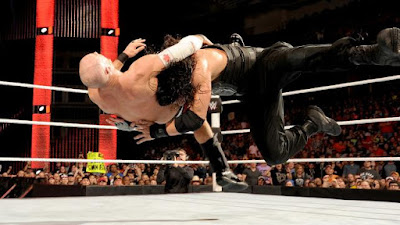 Similar to the Ziggler vs. Ambrose, the crowd could have made or broken this match. Had this been in one of the more "cool" wrestling cities, it perhaps wouldn't have had the same energy behind it. Part of the crowd were behind Reigns, part of the crowd was behind Cesaro and that suited the hard-hitting, alternating contest. The reactions to the various near falls as the bout picked up steam heading towards the finished told you all you needed to know. Everyone involved in the match (including the referee who put in a brilliant performance) took what was in it's essence a pretty predictable win for Reigns into a clash that Cesaro looked like he could have won at various points, non-more so that a backslide reversal of Reigns' signature Superman Punch.


Fast-Forward...A big thumbs up for Reigns post match celebration, as he looked like he'd been through a battle, which only empathises the quality of his victory...The Dudley Boyz went over The Ascension in a short and meaningless piece of tag team filler...The awkward duo of Alberto Del Rio and Zeb Colter were met by Triple H backstage (during an interview with Renee Young) in what was another pretty clumsy moment...I got a strange sense of joy seeing Del Rio struggle with his "Mex-America" flag on the way to the ring, whilst Kalisto handled himself well in an in-vision promo... 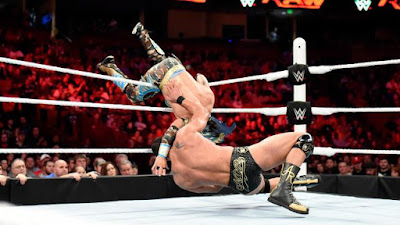 The final match of the evening was another enjoyable encounter, even if it didn't quite manage to reach the heights of the three tournament bouts that had gone before it. Del Rio looking to put the match away as quickly as possible, whilst trying to hit his Tree of Woe Double Stomp, not only gave the match it's narrative back bone, but also put over Kalisto well, following his surprise victory over Ryback on Smackdown last week. The flurries from Kalisto were worked well and his offence works best in that kind of environment, whilst the closing stages of the bout with Del Rio hitting the Double Stomp was sublime. With an extra five or ten minutes, I've a feeling that this could have found itself in the same area as the other tournament matches. 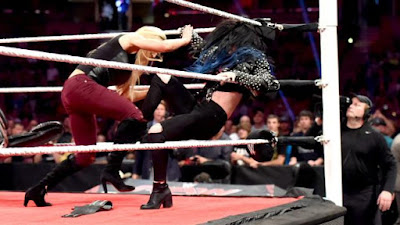 A Diva's contract signing to close Monday Night RAW? Can you imagine that happened two or three years ago? The girls needed to hit it out of the park to make sure there was no real argument against the Diva's Revolution occurring this year. Paige and Charlotte got their characters spot on and whilst there will come a time when Charlotte will have to look for something other than her family for content, it made perfect sense to do so in Carolina. Paige's words about Charlotte's late brother, Reid, seem to have pissed off a lot of people (Including Charlotte's Mother) but it really made me want to see Charlotte beat the living piss out of the Norwich lass...surely the exact reaction I should have been having? Heels are supposed to get under peoples skin and if Paige's comments offended you, then she was doing her job right. Both women looked comfortable closing the show and I'm hoping that they are afforded the opportunity to do so again over the next few months. 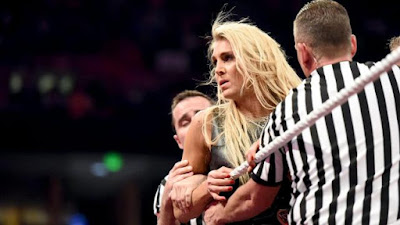 After last week's blip, this was another strong offering from WWE. In my opinion, this was the strongest we've seen Monday Night RAW in the bumpy build-up towards Survivor Series. The tournament quarter finals were all given plenty of time and a tournament that seemed to be lacking in star power heading in managed to raise the profile of pretty much everyone involved in those contests. With two very different segments book-ending the show, the Survivor Series card was promoted strongly and even though I'd side with the opener being the strongest of the two, it was great to see Paige and Charlotte getting the chance to close the programme.


A big shout out to the Greenville crowd who were excellent throughout. More crowds like this one please.


Here's hoping WWE can continue this form into Survivor Series on Sunday!
Posted by QTPW at 23:00