Normally when it comes to writing this article every week, we have to make the difficult choice of deciding which show to feature from the Friday, Saturday & Sunday. However, this week is a little different as when it came to the Friday events we found it to be lacking. In fact there were none or at least none with enough information to write about. So for this week's edition we will focus on one show on Saturday and two on Sunday. Let's get Ready For The Weekend! 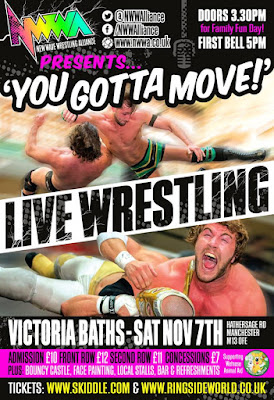 Saturday sees New Wave Wrestling Alliance back at the amazing venue of The Victoria Baths in Manchester for You Gotta Move!. It's hard to believe that this is only NWWA's third show since they began, as they have quickly found their place within the British Wrestling scene. One match scheduled for the November 7th event will see CJ Banks take on James Drake. Banks record speaks for itself with him rightly considered one of the best in the UK today. James Drake is currently on a mission to prove himself to New Wave Wrestling Alliance and their fans. This match would be a great opportunity for Drake to showcase himself but his task in overcoming 'The Juice' is a great one. At New Wave Wrestling Alliance's last show, Sexy Kev challenged Ruffneck to a match. Ruffneck has been running through the NWWA roster, decimating opponents. Sexy Kev understandably isn't best pleased at these actions and has taken upon himself to stop Ruffneck and on Saturday he looks to do just that. These men could not be more different and this match will be a true clash of styles. The main event in Manchester will feature four of the best wrestlers in the UK today, in one four-way battle. Joey Hayes, Jack Jester, El Ligero & Nathan Cruz are in the top tier of talent not just in the UK but also in NWWA with all four individuals picking up wins in previous shows. Realistically, anyone could walk away with a big win this Saturday but who that will be and how far they will have to go to get it, is unknown. 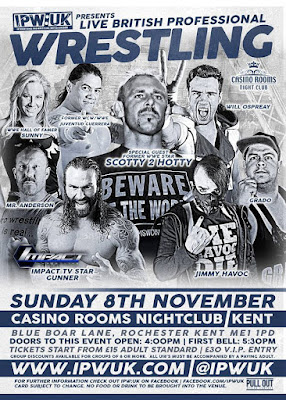 Moving on to Sunday and IPW:UK host their SuperShow 2015 at the Casino Rooms in Rochester. As always with IPW:UK, they have a stacked card filled with proverbial melting pot of British talent with the added dash of international talent seasoning. One match featuring both British and international names is the tag team contest between Project Lucha's Martin Kirby & El Ligero and former TNA star, Gunner & Sha Samuels. A big clash of styles as the hard-hitting Gunner & Samuels meet the fast-paced Project Lucha. Kirby & Ligero will easily be the fan favourites on Sunday but the danger they face in Gunner & Samuels should not be underestimated. Sunday sees every IPW:UK championship defended, including the IPW:UK World Championship. After their last match in which champion, Jimmy Havoc had a lot of assistance from the referee in defeating Grado, the Insane Fight Club star demanded that he was given another shot at Jimmy Havoc with the IPW:UK World Championship on the line. Havoc has brought out an anger in Grado that very few have ever managed. Grado is now using that anger in his quest to become the next IPW:UK World Champion. This time there will be no referee to help Havoc out. If he wants to stay champion and battle in fury inside Grado then he will have to do it alone. Another championship that will be up for grabs on November 8th will see 'Smooth' Sammy Smooth defend the All-England Championship against 'Flash' Morgan Webster. Both of these men have had a fantastic year with Sammy Smooth becoming champion by being the only man to defeat Jimmy Havoc in over 3 years and Morgan Webster delivering show-stealing matches all over the UK against opponents from all over the world. Sammy Smooth is looking to end his year on a high as the reigning All-England Champion but he is up against a man who rivals him in talent, youth and ambition.

*Triple Threat*
Will Ospreay vs. Paul Robinson vs. Tom Dawkins 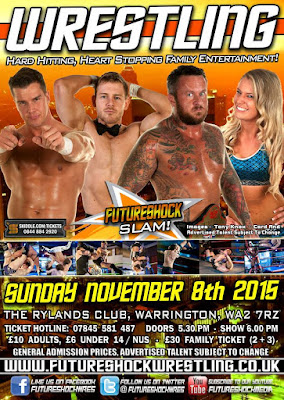 Also taking place on Sunday, Futureshock Wrestling are at The Rylands Recreation Club in Warrington with Slam! 7. One match on the cards will see home-town talents, Sexy Kev & Don Meacho competing in singles action. Even though both of these men hail from Warrington, the reaction from the fans will not be equally happy. Due to Don Meacho's affiliation with The Uprising, he is widely despised by the Futureshock fans. Sexy Kev on the other hand is a loved member of the Futureshock roster. It's time to find out who is the best man from Warrington this Sunday. November 8th will also see two members of The Wonderland in singles action. Firstly, Noah will be in action against Ashton Smith. Noah was always a little...unusual. However, since the formation of Wonderland, he has become even more strange and unpredictable. Ashton Smith on the other hand has made quite the impression since he arrived in Futureshock Wrestling, including a great showing in an Adrenaline Championship match at Underground #12. These men have faced each other before in a six-man tag team match but now it's time to see who is the best one on one. The other Wonderland member, Henry T. Grodd shall also be in competition as he faces Charlie Garrett. Grodd, a product of the Futureshock Wrestling Training Academy has become a real force since joining Wonderland, in fact he has never lost since becoming a part of the group. Charlie Garret has also had some impressive wins since his Futureshock debut in January. While Garrett may have faced some of the biggest names on the Futureshock roster, he has never faced anyone quite like Henry T Grodd. Garrett will look to pick up another win on Sunday but Grodd may do anything we can imagine (and even what we can!) to score another win for Wonderland.


That wraps up this week's preview of the weekend's wrestling schedule. Of course, there are many more events taking place over the three days. To find out more about the shows we've highlighted here as well as all the others, check us out at www.wrestleropesuk.wordpress.com for the latest show and match announcements, British Wrestling event list and more
Posted by QTPW at 17:59