After putting on a good show to open the SuperShow of Honor weekend, PCW and ROH looked to build on that with the 2nd event. Held at the Evoque Nightclub in Preston, Lancashire from 1pm on 28th November 2015, the show featured Jay Lethal defending his ROH World Heavyweight title against Doug Williams in the main event, as well as Noam Dar facing Cedric Alexander, Dave Mastiff defending the PCW Heavyweight Championship against Silas Young and five more matches involving the likes of reDRagon, Adam Cole, Dalton Castle, Martin Kirby and Roderick Strong. But could the 2nd show live up to the first...Let's find out.


If the crowd needed waking up for the early afternoon bell-time, then the Six way clash featuring Kenny King, Bubblegum, Dave Rayne, ROH World Television Champion Roderick Strong, El Ligero and Charlie Garrett, was the match to do it. The fast-paced, spot-based action never let up with numerous dives, flips and tricks, whilst also taking some time to venture into something a little more comedic usually provided by Rayne. Two stand-out moments for me were a sound back and forth sequence between Bubblegum and El Ligero, harking back to their Triple Threat bout the night before, and Dave Rayne hitting pretty much everyone with a cutter, which the crowd lapped up. When Roddy Strong walked out with the victory following a Sick Kick to Rayne, the crowd had remained lively throughout and were more than warmed up for the rest of the afternoon's action.


Before the bell even rang for Dalton Castle's clash with Sha Samuels, the duo had had the crowd in stitches. The two characters made for a perfect combination and both men hammed up their performances to make the most of their limited interaction together. There were some splendid ad-libs from both, garnering many a chuckle from the crowd, who had been quick to warm to Castle in what was only his 2nd appearance for PCW. It's a shame that these two aren't part of the same promotion regularly, as a long running feud would have some real potential. 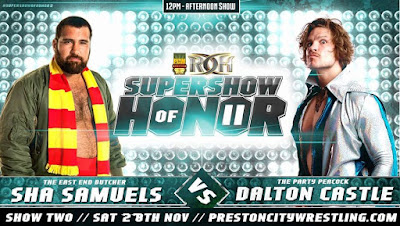 Bell to bell the action was fairly short, but was essentially just a continuation of what we'd seen between Sha Samuels and Dalton Castle before the match officially began. With plenty of character based comedy, used to drive the storytelling, the contest had a lot of heart and was tremendously easy to watch. Samuels action was smoother than we'd seen the night before and Castle managing to get to the ropes a number of times whilst in the Sleeper hold was a simple and effective way of keeping the crowd hyped for the babyface Castle, whilst continuing to keep Samuels' looking strong. 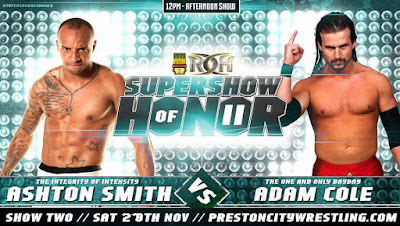 Ashton Smith had a real opportunity to show-off his skills against one of the finest wrestlers in the world next, in what was arguably the 26 year old Brit's biggest match in a PCW ring. Cole always being a step a head of Smith made up the back-bone of the contest, with the story playing off the experience difference between the two. Smith was given just enough offence in to allow him to look capable of surprising Cole, meaning that the Interracial Love member came out of the match all the better for being a part of it. His no-sell into Yurinogi sequence was brilliantly done and got a nice reaction out of the crowd on the near fall. It would seem like Smith is being positioned for a run with the Cruiserweight belt, as he was allowed to look like credible contender here, despite falling to defeat. A rematch down the line would surely be greatly received. 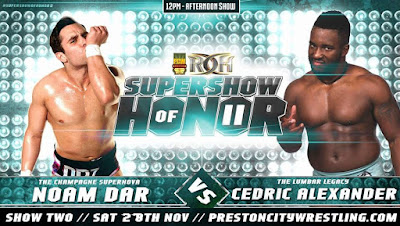 After his main event loss to Jay Lethal the night before, Noam Dar found himself in action against Cedric Alexander on Show 2. In what would be the longest contest on the show, the pair connected well to produce some quality technical wrestling in the early going, keeping a steady pace. Despite the quality of the wrestling, there was one thing that everyone came away with from this contest...the ONE chant. Basically, Dar and Alexander ran through a series of roll-ups and pinning combinations each of which would earn them a one count, with a young looking referee seemingly thrown by the situation. The chant would be adopted by the Preston faithful and become a major part of the rest of the weekend.


The pace began to lift throughout the bout, with the action gradually becoming more serious and harder hitting as the contest went on. A series of forearm trades was particularly impressive in their execution. The finishing sequence was incredibly smooth also, with the two going back and forth with a number of reversals, before Dar caught Alexander as he attempted an enziguiri and managed to lock in the Champagne Super Knee Bar for the submission victory. Dar locking in the submission got a big reaction, which almost certainly had something to with it being the focus of the main event contest the night before, and the fluidity of the transition was splendid.


Oh sweet sweet, Kyle O'Reilly. Bless your cotton socks, fella. The reDRagon member came out looking a little bit worse for wear, for the teams Four Corners bout for the PCW Tag Team Championships with Team Single, War Machine and Martin Kirby and Joey Hayes. Undoubtedly the highlight of the lengthy pre-match entrances, the state of O'Reilly got a hearty chuckle from the crowd, who continued to chant for their newly adopted son. If you'd have wondered up to the bar the night previously, during Chris Brooker and Billy Kirkwood's comedy gig, you'd have known exactly what killed off Kyle for his first match on Saturday. 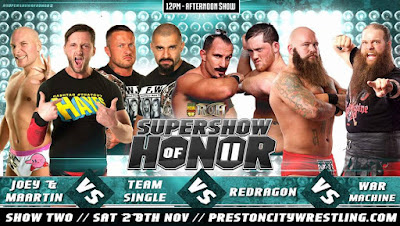 The bout itself played off this element well, with Kyle O'Reilly struggling to hit a number of moves, in a comical fashion and being helped by partner Bobby Fish a number of times, whilst the crowd chanted "Get Kyle a Pillow" and the IWGP Junior Heavyweight Tag Team Champion rested his head on the top the turnbuckle. The action was kept fast and furious, with the eight men providing a lot to look at both at ringside and in the ring. The PCW and ROH tandems split off quite early in the bout and almost exclusively working with each other for the rest of the bout. For me, this was a shame as there could have been a bit more exploration of things like the past between Team Single and reDRagon, so it would have liked to have seen this one go a little bit longer. Seven minutes just isn't enough time for eight men to truly explore all the options open to them. Rampage Brown and T-Bone were able to claim a modicum of revenge on Joey Hayes and Martin Kirby as they pinned them following twin piledrivers to retain the PCW Tag Team Championships.


Despite losing to Doug Williams on Show 1, Silas Young was granted a PCW Heavyweight Championship shot on Show 2...go figure. Moving past that questionable decision, this was another stellar outing for Young in his 2nd bout for PCW and he linked up well with Dave Mastiff to create a technically solid encounter. With Young becoming more and more over as a heel by the minute, the Last Real Man spent a lot of the contest trading barbs with the crowd, encouraging them to chant and raising the atmosphere in the building once again. Mastiff was on form as well with a couple of funny one-liners that made it even easier for the crowd to get behind their popular champion. If it was a little longer and with a bit more drama then this contest could've been one of the stand-out contests of the evening, but it still worked as a way of adding another notch to Mastiff's championship bedpost.


In my first chance to see Lionheart in singles action since his heel turn a few months back and I was reminded of what a superb villain he is, in a match with Delirious. A couple of little touches throughout the match, allowed the Evoque to really get on the former Heavyweight Champion's back and the cycle continued. Lifting Delirious shoulder off the mat after having the contest won made him look like a massive dick and also provided a great near fall for the former CHIKARA Campeonatos de Parejas Champion. For what it was, I felt it perhaps went a little too long, with the crowd losing interest in the middle of the contest, by losing three or four minutes and slim-lining the action I feel the contest would have actually been improved. Plus that three or four minutes could have been given to something like the Tag Championship four way. 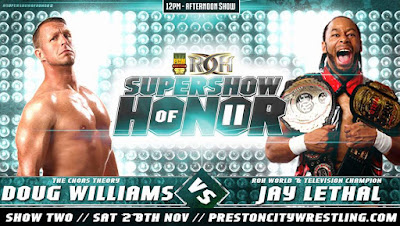 Main event time and Jay Lethal was clocking up his 2nd main event of the weekend, this time defending his ROH World Championship against former ROH Pure Champion, Doug Williams. The crowd seemed to take a while to warm to the very technical first two thirds of the bout, as the pair went back and forth, but on a look around the club it seemed like everyone was completely enamoured with the style and skill of the two men. There was even space to continue some of the storytelling from the night previous with Williams focusing in on Lethal's leg. The two had clearly worked with each other before (although not since 2010, but they did work TNA PPV's, TV and House shows between July and October of that year) and that helped to produce one of the slickest finishing sequence of the entire weekend. Williams was able to dodge the Lethal Injection and turn it into a Chaos Theory attempt, before Lethal himself managed a reversal hitting a Superkick and Lethal Injection to retain the championship, neither man put a foot wrong and capped off the 2nd show of the weekend well.


Whilst this shows rating dips slightly from that of the first show (6.85), we still got a good wrestling show on a Saturday afternoon. I'd be happy with either Dar vs. Alexander or Lethal vs. Williams being given the Match of the Night title, as both contests contained plenty of lovely technical wrestling and layed on the entertainment level thick. Perhaps my favourite part of the entire show however, was the back and forth between Dalton Castle and Sha Samuels prior to their match, thanks to both the performers and characters seemingly a perfect fit for each other.
The shows rating could have ended up being higher if a couple of minutes was shaved off the Lionheart vs. Delirious contest and handed to the PCW Tag Team Championship Four Corners bout. Even then I still think by this point we hadn't seen a bad match across the two shows and that's why both shows have managed to end up comfortably inside the "Good" range on the ATPW Scale.


Would PCW and ROH be able to keep up things inside the good range or even improve on that, with Show 3? Dave Mastiff would defend his PCW Heavyweight Championship against PCW Cruiserweight Champion Adam Cole in a Thirty Minute Iron Man main event, Noam Dar would tackle Drew Galloway, F.W.B. (Bubblegum, Iestyn Rees & Team Single) would engage with Dave Rayne, The Hooligans and X-Pac in eight man tag action, with six other matches including the likes of reDRagon, Dalton Castle, Martin Kirby, Roderick Strong and Cedric Alexander all also in action. We'll have a review heading your way later this week (as well as the last show of the weekend coming soon)
Posted by QTPW at 00:22