Wrestle Ropes' Ready for the Weekend: December 2015 Week One

We're back once again on Across the Pond Wrestling, to look at a packed three days of professional wrestling around the UK. Long running rivalries will be settled, a company will set a new attendance record for themselves and another promotion heads to a whole new area. Let's get Ready For The Weekend. 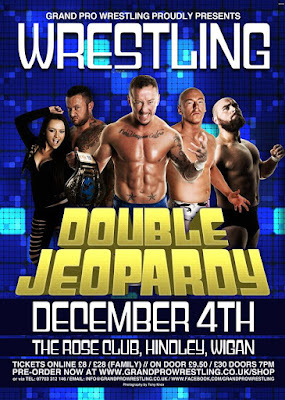 On Friday night, Grand Pro Wrestling are back at The Rose Club in Hindley, Wigan with their final show of the year, Double Jeopardy. The event will see all of Grand Pro Wrestling's championships on the line including a four-way battle between Bubblegum, T-Bone, RJM & Craig Kollins where both the GPW Championship and GPW British Championship shall be defended at the same time. All four of these men have had issues with each other in the past year and there is a lot of conflict heading into the match. Not only could we see one championship change hands on December 4th but we could see two changes in just one match. The Island Brothers were one of Grand Pro Wrestling's most dominant teams until Rio's sudden disappearance. Forced to fight by himself, Tabu began to question Simon R Valour's involvement in his brother's mysterious absence. Well he soon found out what part Valour had played in the disappearance when Rio returned and turned on his brother. Tabu sees Simon R Valour as the reason for this attack and now he wants revenge on his former manager. A normal match wasn't big enough for these two to settle their issue so the contest will be a chain match. But with his brother at ringside, will Tabu get the revenge he seeks? Another championship on the line on Friday night will be the GPW Tag Team Championship. As the winner of the North West Rookie League, Danxig was awarded a championship match of his choosing. He has decided that his mentor, Dylan Roberts and himself want tag team gold. Their opponents, The Midnight Bin Collection are a unique duo but have proven numerous times that they are a formidable team who will provide a huge challenge to the duo of Danxig and Dylan Roberts. Add in the element that this will be a Tables match and Danxig may regret challenging The Midnight Bin Collection or the North West Rookie League winner might show why he walked away with the NWRL in the first place
. 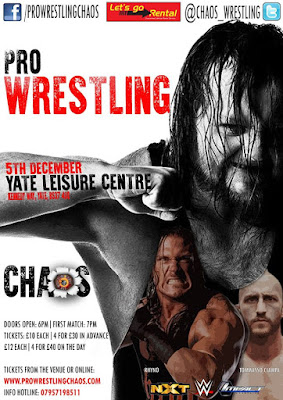 Moving on to Saturday and Pro Wrestling Chaos host Rhynos, Boars, Birds & Beards at the Yate Leisure Centre in Bristol. This show has already broken Pro Wrestling Chaos' pre-sale record and will no doubt be sold out on the night. When you see some of the matches on offer, you see why. At PWC's last show, Pariah Khan announced that Jeckel was challenging Tommaso Ciampa to a match on December 5th. Ciampa is never one to back down from a fight so the match is on and Jeckel gets to face one of the hardest hitting men in professional wrestling today. However, the Chaos regular is no weak man himself, he has ploughed through numerous men on the Pro Wrestling Chaos roster. We're seeing two men go full speed at each other this Saturday. Since Gideon was replaced in The Doomsday Killers by Ian Williams, he has made it his mission to gain some retribution. The group themselves have been throwing out challenges to anyone who would stand in front of them. Ian Williams has now challenged Gideon directly to a six-man tag team match and Gideon hasn't backed down a step. He has called on Mikey Whiplash and 'The Man-Beast' Rhyno to join him in facing KillBane, Big Grizzly and Ian Williams this Saturday in Bristol. The Doomsday Killers want to make an example of Gideon, who is out to start a war. A war that The Doomsday Killers may regret instigating. The main event of Rhynos, Boars, Birds & Beards will see Mike Bird defending the King Of Chaos Championship against Wild Boar in a 30-Minute Iron Man match. These two men have fought over of the title for the last few months. Boar cashed in his championship match contract on Bird, who then won the title back the very next show after a mysterious man took out Wild Boar. This feud needs to be settled and one fall won't be enough to do it so we're going to find out who is the better man and who can score the most falls to walk away with the King Of Chaos Championship this Saturday. 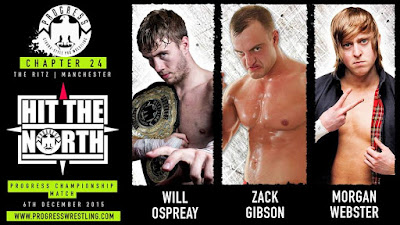 Finishing up the weekend, PROGRESS Wrestling head to new territory as they host Chapter 24: Hit The North! from The Ritz in Manchester. As with almost everything that PROGRESS do, it's already sold out (although you might get yourself a return ticket on Twickets) and that's not a surprise when you see what has been announced so far for their Manchester début. At last week's show in London, Zack Gibson made his intentions clear after he defeated Morgan Webster, all be it in controversial circumstances, to win the Natural Progression Series trophy when he announced he would be challenging for the PROGRESS Championship on December 6th. PROGRESS however, could not let Morgan Webster lose his championship opportunity im such a way and have therefore added
him to the match as well to challenge Will Ospreay. Ospreay has had some very tough opponents since he won the championship but this is his first multi-man defence. Gibson wants to add to The Origin's championship gold, Morgan Webster wants to right the wrong done to him by Gibson and Ospreay wants his championship reign to continue. This is a match where anyone could walk out the champion and everyone wants nothing more than having the gold around their waist. Speaking of The Origin, Nathan Cruz, El Ligero and Dave Mastiff will also be in action as the face Mark Andrews, Eddie Dennis & Jack Gallagher in a six-man tag team match. Cruz & Ligero originally won their first PROGRESS Tag Team Championship from Andrews & Dennis (known as F.S.U.) when they are known as The Faceless before becoming The Origin. Dave Mastiff on the other hand delivered a beating to Jack Gallagher before The Bastard joined The Origin. Andrews, Dennis & Gallagher all have unfinished business with The Origin and we're going to see that settled this Sunday in Manchester. When PROGRESS announced they were heading to Manchester, they wanted to show that they meant business. How did they do this? Well, the same way they always do. The announced the astounding match of Zack Sabre Jr vs Tommaso Ciampa. We could talk on length about how good this match is and how good each man is but we'd be wasting our time. Both men are easily known as two of the best wrestlers around right now. These two men have met during the Super Strong Style 16 tournament earlier in the year. Just like then, this will no doubt be a world-class contest. This Sunday, PROGRESS hit the north and they hit it hard!

That wraps up this week's preview of the weekend's wrestling schedule. Of course, there are many more events taking place over the three days. To find out more about the shows we've highlighted here as well as all the others, check us out at www.wrestleropesuk.wordpress.com for the latest show and match announcements, British Wrestling event list and more!
Posted by QTPW at 20:46