Airing on 26th January 2016, the 602nd edition of TNA's Impact Wrestling featured a Feast or Fired bout including the likes of Bram, James Storm, Bobby Roode, Drew Galloway and Rockstar Spud and Jeff Hardy calling out his World Heavyweight Champion brother, Matt Hardy...but was it any good? Let's find out. 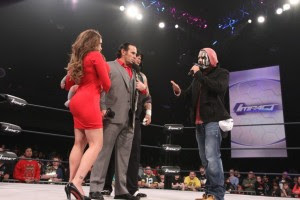 Things got off to a...start with Jeff Hardy heading out to the ring to vent his frustrations with his, now villainous brother and TNA World Heavyweight Champion, Matt Hardy. The absolute highlight of the entire segment was the site of the 375 lb Tyrus walking to the ring holding Matt Hardy's baby, Maxel. For some reason Tyrus had a t-shirt on his head, adding to the ridiculousness of the image. Basically, Jeffrey was pissed at Matthew for using under handed tactics to win the World title last week, leading to Matt claiming that Jeff was now just the "Other Hardy", before the two agreed to settle it in the ring later on. Whilst there was some weirdly phrased bits of dialogue from both guys, the crowd seemed pretty into the concept and that gave things just enough drive to remain entertaining. Matt Hardy's turn has a lot of potential and he's clearly putting a lot of effort into creating the new act, I'm interested to see where he, Tyrus and Reby take things over the next few months.
fast-forward...Some dudes talking about the upcoming Feast or Fired bout, including Beer Money, Rockstar Spud, Grado, Drew Galloway...The last couple of competitors made their way to the ring for the Feast or Fired match, the commentators fail to mention why Eric Young is competiting in the bout despite being King of the Mountain Champion... 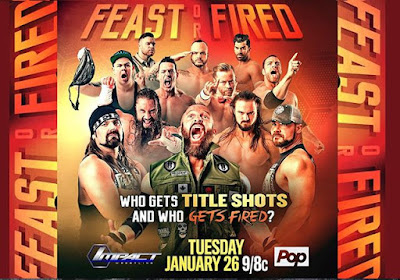 This match is no where near the spectacle that it should be. What should be TNA's version of the Money in the Bank Ladder match, essentially is just too many guys in the ring, brawling for a bit and then at random points deciding to grab at one of the briefcases hanging above the ring. Maybe this is a little bit harsh, as the bout did manage to pull out some pretty good spots, like Bobby Roode sending Rockstar Spud to outside with a Roode Bomb, a cool sequence between Drew Galloway and Eli Drake which finished in Galloway hitting a snap german suplex off the top, and a Tower of Doom spot involving Chris Melendez. However, the concept itself is one that has never quite clicked together, as having four briefcases and twelve men means that the match ends up devoid of pretty much any drama. Bobby Roode allowing James Storm to pull down a briefcase also ended up devaluing the potential title shots, rather than strengthening them as a tag team. 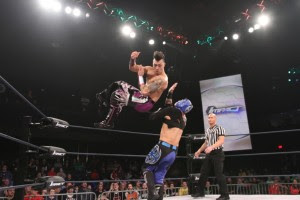 Despite both Mandrews and DJ Z getting title shots for no reason what so ever, the three way for Tigre Uno's TNA X-Division Championship actually turned into a pretty good' piece of X-Division action. Once the match had found it's groove and the three competitors began to gel, we got a fast pace that kept the spots coming. A sequence featuring multiple dives to the outside is always a sweet watch, but we also got Mandrews using his skateboard to hit a hurricanrana on the way down the entrance ramp! That's without mentioning that DJ Z hit a reverse rana on Mandrews! With a little bit more time and some reasons for the title match happening and TNA really would have set tongues wagging about their product once again.


fast-forward...Gregory Shane Helms appears to challenge Tigre Uno to an X Division title shot next week...Awesome Kong has words with her Dollhouse sisters, her new heel character is funky...Jessie Godderz attempts to convince Eli Drake to open his Feast or Fired briefcase, nothing really happens...Kurt Angle went to confront Matt Hardy backstage, one last title shot for Angle perhaps to come...Awesome Kong and Velvet Sky head out to the ring for their match alone...Awesome Kong squashed Velvet Sky in a matter of minutes, finishing her off with an Implant Buster...Some shouts out "New Day" during a Dollhouse beating of the Beautiful People, the rest of the crowd is pretty much silent...The Wolves call out Crazzy Steve who apparently stole their TNA World Tag Team Championships last week...Jeremy Borash hosts a segment with the Feast or Fired briefcase holders, with Mike Bennett & Maria Kanellis interupting and seemingly start a feud with Drew Galloway, before it was revealed Eli Drake had a King of the Mountain title shot...Crazzy Steve answered The Wolves challenge, revealing his new partner Abyss and some girl who cut a freaky promo...

the wolves defeat crazzy steve and abyss via disqualification


An entertaining tag match that debuted the new tag duo of Crazzy Steve & Abyss well, showcasing their relationship whilst also giving Steve a chance to get over his new darker character shift. With the heel duo dominating Davey Richards for most of the match, we got Steve & Abyss working quick tags to stay in control, whilst a chokeslam from Abyss to Steve onto Richards offered a real insight into what the newer Steve is willing to do in order to hurt his opponent. The finish of the bout was a little bit of let down, as struggled to make much sense either in or out of kayfabe. With The Wolves about to deliver their double double stomp finishing move, Steve & Abyss' weird girl appeared on the entrance ramp, leading to Richards' chasing after her and Abyss hitting a Blackhole Slam on Eddie Edwards. All well and good until Steve spat purple mist into Richards face and the ref called for the DQ. If Steve and Abyss weren't bothered about winning, why would they wrestle for six minutes or so prior? A frustrating end to what looked to be a promising debut for The Decay. 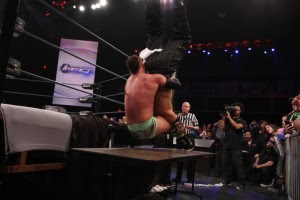 I was all ready to write about TNA giving away a Hardy vs. Hardy bout at the first opportunity with zero promotion, when we got a big ol' swerve to close the show. Eric Young interrupted just after the bell had rang to question why Jeff was number one contender, before Bram attacked Jeff Hardy from behind. Things got a bit clusterfucky from then on in, with Beer Money, The Decay and Kurt Angle all coming out to get involved in the brawl. It was all very confusing at this point. However, once the dust was settle, Eric Young piledriving Jeff Hardy through a table at ringside was a pretty cool spot that made Young look like a ruthless bastard, whilst setting up a feud that will keep Jeff Hardy away from a match with Matt, giving TNA time to (hopefully) properly promote a title match between the two. It also seems we may see Matt Hardy work a programme with Kurt Angle over the next few weeks, after Hardy laid out the former 4 time WWE World Heavyweight Champion with his TNA World title belt, with a little help from Tyrus.


A decent episode all round this, with the X-Division Three Way standing out as a particular highlight of the evening. I was kept entertained by pretty much all of the longer segments on the show, with each showing potential in terms of growing a particular storyline and making things more interesting over the next few weeks. Matt Hardy's heel act has grown quickly over the space of the week and has room to move as World Heavyweight Champion, TNA just need to find a challenger that I can get behind of, and begin to weave a compelling story for the two. The likes of EC3 and Drew Galloway could be their best bets for that role at the moment, with Jeff Hardy and Kurt Angle offering options with name value that could cement Hardy's run whilst giving even more credibility to the guy who topples "The Iconic" one.

With the UK tour beginning on Friday, and those episodes set to begin to air in the middle of February, let's see if TNA can use those episodes to begin to drive interest in their product and create a positive buzz about the company once more, using the ground work that has been done in the first four episodes of 2016.