Just one night removed from the 2016 Royal Rumble, WWE presented the 1183rd edition of Monday Night RAW. The Rock returned to verbally joust with The New Day, new WWE World Heavyweight Champion Triple H opened the show with Mr. McMahon and Stephanie McMahon and Roman Reigns teamed with WWE Intercontinental Champion Dean Ambrose to take on the League of Nations' Sheamus & Rusev in the main event as The Authority scouted potential challengers for main prize....but was it any good? 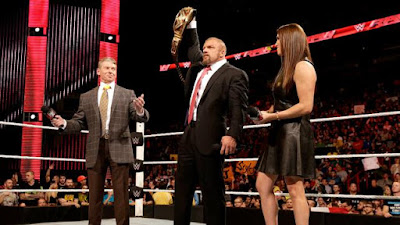 An unusual opening segment, as Mr. McMahon & Stephanie McMahon introduced our new WWE World Heavyweight Champion, Triple H. We got the theme for the rest of the show with the announcement that the main event of Fastlane would be a Number One Contender's bout for Triple H's title, and we'd get an announcement of that match at the end of the show. However, apart from this, very little actually happened here. Trips came out, revealed he entered the Rumble because he wanted to win the title and keep it away from Reigns, and then left. It was overly long for what it was, and whilst the words were crafted well, without anything of note actually occurring here then they become just a little empty.


fast-forward...Dolph Ziggler and Kevin Owens entered the AmericanAirlines Arena for the opening bout of the show, with highlights of Owens losing to Dean Ambrose in a Last Man Standing contest at the Royal Rumble the night before... 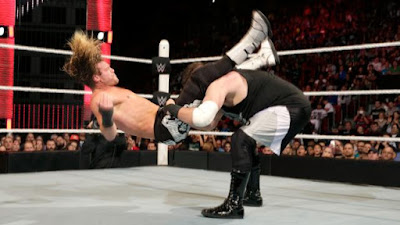 A perfectly acceptable outing from Kevin Owens and Dolph Ziggler opened the show's action, with The Prizefighter able to put himself back on track after failing to win back the Intercontinental Championship on the previous night. I got a big kick out of Owens selling the effects of the physical bout he had with Dean Ambrose the night before (and competing in the Royal Rumble) but him being able to overcome the odds and eventually pick up a clean victory with a Pop-Up Powerbomb makes it seem like WWE is planning a slow-burn face turn for the former ROH World Champion. The two are capable of putting on a much better contest than this, but the action they did produce was entertaining throughout, with the two able to put together some good wrestling sequences, even with both holding more than a little something back. Here's hoping that a victory here means strong WrestleMania plans for Owens, I think Ziggler's best hope might be post-Mania heel turn to help refresh his act.


fast-forward...Owens continued to sell his struggle in his post-match celebration, expect a babyface turn sooner or later... 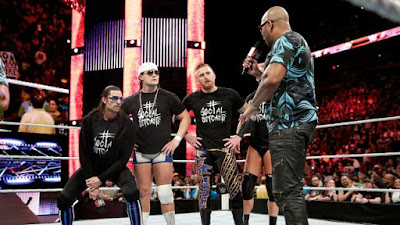 You know when you're enjoying a bag of Revels, you're getting along fine with the bag of Revels, munching those little chocolate bastards and enjoying the variety, then all of a sudden the fucking coffee revel decides to rear it's ugly head and make you question why you're even eating a bag of revels at all. That was this segment. Flo-Rida was the coffee revel in this scenario, whilst Adam Rose, Bo Dallas, Curtis Axel and Heath Slater were all the other Revels. Flo Rida is shit at the one thing he does, and somehow got out done by Bo Dallas in a rap battle. Man, I really want some Revels.


fast-forward...The Dudley Boyz squashed The Social Outcast's Bo Dallas & Curtis Axel, with Flo-Rida continuing to be the fly in the ointment at ringside...Renee Young interviewed AJ Styles with Chris Jericho interrupting, what a time to be alive... 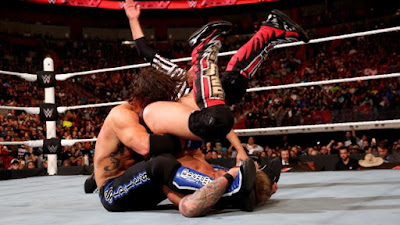 AJ Styles first ever singles match in the WWE provided a sound showcase for the former IWGP Heavyweight Champion. Whilst the "dream" match with Chris Jericho wasn't the God tier bout that I feel many had in their heads when this was announced, it was still a good back and forth encounter with a lively crowd. The match was clearly put together to introduce AJ Styles to the WWE audience and put over his in-ring style and character. At points there was a clear communication issue, as the pair grew accliminatised to each other inside the ring, but nothing that seemed to majorly impact on my enjoyment of the match. Styles and Jericho upped the pace for the final portion of the bout and putting on a strong competitive sequence to close the bout, with a strong false finish with Y2J locking the Liontamer on Styles, leaving me feeling pretty satisfied with Styles' first WWE match. The on-going story of Styles being unable to hit the Styles Clash could prove interesting over the next few weeks and hopefully lead to the move getting a great reaction when he finally hits it.


fast-forward...It seems AJ Styles and Chris Jericho aren't done, as they shared a handshake and staredown following the match...With highlight's of the previous night's Diva's Championship bout, Becky Lynch and Sasha Banks made their way to the ring...Becky and Sasha's bout was cut disappointingly short by interference from WWE Diva's Champion Charlotte, who looked ridiculously strong as she took out both competitors...A bizarre backstage segment between Goldust and R-Truth seemed to suggest the two will begin teaming soon...As Bray Wyatt made his way to the ring for a match with Kane, we got highlights of the clash between The Wyatt Family and Brock Lesnar during the Royal Rumble match...Wyatt went on to squash Kane whilst the fans got distracted by some guy wearing a Randy Savage outfit at ringside... 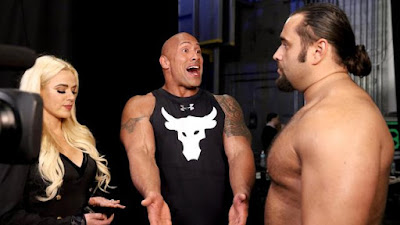 The Rock is back! Returning in a glorious backstage segment, we got to see Rocky interact with a handful of current WWE roster members. The Rock was on fine form, flowing from one person to the next and oozing charisma throughout. He could have been saying absolutely anything and I would have been glued to my screen. My personal favourite moment was The Rock bumping into Big Show, and reminiscing about The Great One's Royal Rumble win in 2000. Both men played the moment perfectly, with Rock's verbiage about that Big Show could have been a Hollywood star had he won the match, being particularly chuckle-worthy. The People's Champion even managed to make talking about shagging Lana into something entertaining, rather than the cringe-fest it could have become. (I could write a whole article on the content of that part though!)

the new day interrupt the rock 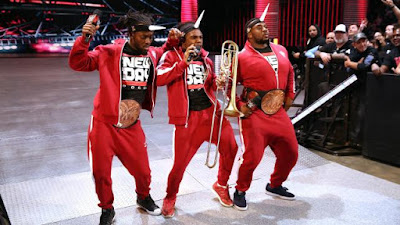 The Rock and The New Day going at it on the microphone was never going to be anything other than fucking awesome was it? The Rock clearly had a little more freedom with what he could say here, as there was plenty of fruity language from the 8 time WWE World Heavyweight Champion, shitting all over Chris Jericho's promos with the group from the last couple of weeks. I'd much rather shout "Llama Penis" than "Rooty Tooty Booty", although that probably says more about who I am than anything else. The New Day were on fine form and easily managed to match Rocky on the mic, giving as good as they got and providing some priceless reactions to what the Hollywood star had to say. It's great to see the trio getting opportunities like this to continue to prove themselves. 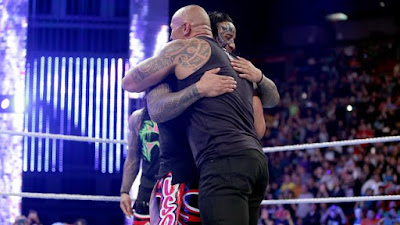 The New Day stepping down from The Rock's challenge to get in the ring with him, because Miami didn't deserve it, was a great move. It instantly got the group even more heat and made the crowd want to see the face off even more than they previously did. Therefore when The Usos came out and helped Rock kick the WWE Tag Team Champions candy asses, it was a much bigger moment and bought the segment to a satisfying conclusion. Even if we've seen The Usos feud with the group for a good number of months and it would have been nice to see a new tag team rivalry develop on this show, Jimmy and Jey made perfect as The Great One's sidekicks, being connected through their Samoan family heritage.


fast-forward...Paige & Natalya squashed Brie Bella & Alicia Fox for reasons...The Miz began to cut an in-ring promo about being interrupted by the Rock, only to be interrupted by WWE United States Champion, Kalisto... 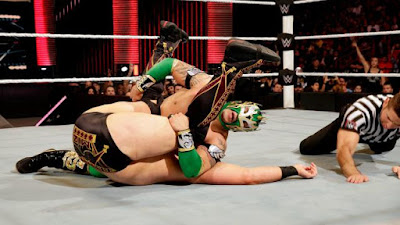 Seeing as most of the matches went without any real storyline involvement, with the driving force of the show supposedly being the idea that each man was trying to impressive the Authority in order to get themselves into the main event of Fastlane...who on earth booked Kalisto vs. The Miz? The crowd couldn't have cared less about the action in the ring, that was luke warm at best, and neither man looked particularly impressive in the ring. Whilst handing Kalisto a big win over a former WWE World Heavyweight Champion cements his United States title reigns after trading the title back and forth with Alberto Del Rio, but the bout itself struggled to hold my attention.


fast-forward...Kalisto celebrated his victory over Miz...It was time for the main event as Roman Reigns and Dean Ambrose headed to the ring to face League of Nations duo Sheamus & Rusev... 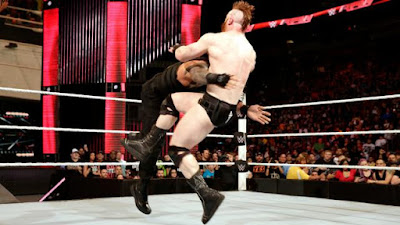 One of the strongest matches on the show, I found myself enjoying this week's Monday Night RAW main event a lot more than I had expected to. I think because the feud between The League of Nations and Roman Reigns (and his pals) has seemingly gone on forever and featured numerous tag bouts with numerous combinations, that I couldn't find a reason to get excited about seeing another match. However, we actually seemed to get some kind of feud closing bout, as both sides put in a stellar effort to create a psychical encounter with a strong narrative. The League of Nations using their numbers on the outside to take control of the bout and then taking advantage of Ambrose' fatigue from wrestling in two long bouts on the previous night's PPV, produced some compelling television as fan favourite Ambrose struggled to make the tag to Reigns. With a hot tag that made Reigns look great, a strong false finish off a Brogue Kick from Sheamus to Reigns and an a satisfyingly clean finish when Reigns pinned The Celtic Warrior following a spear, this bout made the most of what it had and ended the show on a high note.


fast-forward...After Reigns and Ambrose hit the Shield's old powerbomb on Rusev through the table, Stephanie McMahon announced that both Reigns and Ambrose would be involved in the main event at Fastlane, alongside Brock Lesnar.... 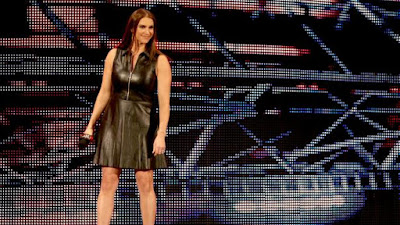 
After a shaky start in the first hour, WWE managed to pull out a good episode of Monday Night RAW, helped along by the return of The Rock. With the Brahma Bull on fine form and being joined by the likes of The New Day, end of the 2nd hour of the show was a spectacular watch. With the Rock confirmed for WrestleMania, it surely wouldn't be wishful thinking to suggest that we'll be seeing a lot more of the former 8 time WWE World Heavyweight Champion over the upcoming two months. Whilst the concept of everyone attempting to impress the Authority wasn't used to it's full potential (Who booked Miz vs. Kalisto?), it did provide us with two good bouts in the form of AJ Styles' WWE debut opposite Chris Jericho and the main event tag encounter. Plus not a single screwy finish for the men on the entire show can't be bad, right? If we cut out Flo-Rida's awful rap segment with the Social Outcasts we'd have seen the show get an even better score on the ATPW Scale.


Can WWE keep this momentum going and move to drive storylines forward over the next three weeks before Fastlane in Cleveland? We shall see.
Posted by QTPW at 23:04