Now that the festive period is now past and the wrestling schedule is now getting back into full flow, it's time to get Ready For The Weekend for the first time in 2016! 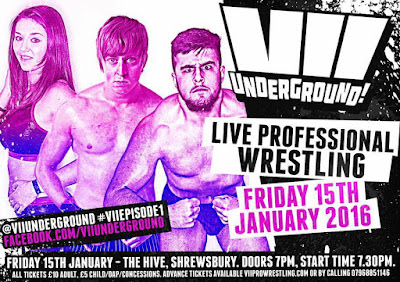 Friday night shall see VII Underground, formerly known as VII Pro Wrestling before joining together with Shropshire Wrestling Alliance who took the VII Pro Wrestling name for their own events, host their first event of 2016 at The Hive in Shrewsbury. The event entitled 'Episode 1: Live Free Or Fly' has four matches currently scheduled to take place on January 15th. One match of particular interest is 'Flash' Morgan Webster vs Nixon Newell. Both Webster and Newell proved in 2015 that they are set to continue their rise in British Wrestling with opportunities presenting themselves even further afield. Both competitors have been stealing shows all over the UK and their match at VII Underground may well be another to add to the list. Originally VII Underground announced that Dan Moloney would be facing Ethan Silver this Friday. However, Mike Bird took exception to that as he felt their was unfinished business that had to be addressed after the Trifecta Trophy tournament. So, VII Underground obliged and have added 'Ginger Jesus' to the match to make it a triple threat contest. A match of competition just turned into a match filled with bad blood. Speaking of the Trifecta Trophy, the ending of the tournament was marred with controversy when Wild Boar got involved, knocking out Ryan Smile, allowing The Bruiserweights the win. Understandably, Ryan Smile is not happy and wants a measure of retribution against Wild Boar and VII Underground were happy to let these two men sort out their differences in the middle of the ring.

Wild Boar vs ‘The All Day Star’ Ryan Smile 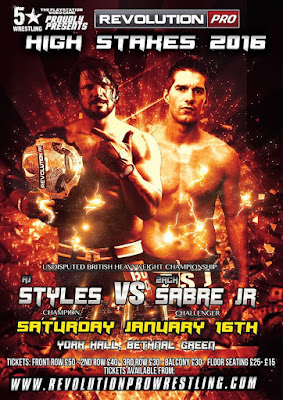 As we move on to Saturday, Revolution Pro Wrestling are back at the York Hall in London with another sold out show. 'High Stakes 2016' looks to be a show that could be an early contender for show of 2016. The show is filled with some of the best talent in Britain today along with a dash of international excellence. One man who is kicking off his 2016 with some great matches is Mark Haskins. 'The Star attraction' is scheduled to face the current Ring Of Honor World Champion, Jay Lethal this Saturday. Mark Haskins is without doubt one of the best wrestlers not only in Europe but probably the world. His skills seem to grow every month. Those skills will be put to the challenge o January 16th though as he is facing a World Champion who has beaten some of the best in the world in recent months. Haskins 2016 could will get off to a great start with a win over the top man in Ring Of Honor and put Mark Haskins' name even higher up the list of the world's best. Pete Dunne is a man that many are saying will have his best year yet after evolving into such a refined wrestler during 2015. That refinement was displayed after he became the Undisputed British Cruiserweight Champion only 3 days into 2016. His opponent will be the man who he defeated to become champion, 'Flash' Morgan Webster. This match will be an opportunity for Pete Dunne to give a great first impression as a champion in Revolution Pro Wrestling but also a chance for Morgan Webster to prove that Pete Dunne's win over him was a one-off. The main event for 'High stakes 2016' will see one of the best wrestlers in the world defend the Undisputed British Heavyweight Championship against 'The British Master' as AJ Styles face Zack Sabre Jr. AJ Styles has been at the top of every promotion he has ever been a part of an Revolution Pro Wrestling is no different. Likewise, Zack Sabre Jr
has been a part of some of the best known promotions in the world such as PWG & NOAH. However, Zack is now back and he looks to become the man in Revolution Pro Wrestling by taking the Undisputed British Heavyweight Championship from a multi-time, multi-promotion world champion in the shape of AJ Styles. As we said before, this show will be an earlier contender for Show of 2016. This match may well be a contender for Match Of The Year as well.

‘The Beast Of Belfast’ Big Damo vs ‘Speedball’ Mike Bailey 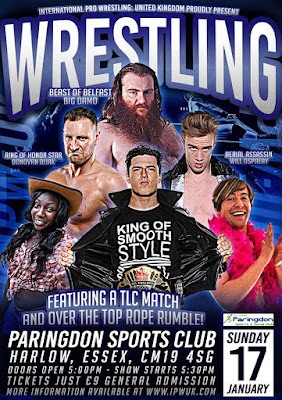 Finally rounding off the first full wrestling weekend of 2016 and IPW:UK are making their debut in Harlow, Essex in conjunction with WrestleForce. One match which will see IPW:UK and WrestleForce meet will see Nightshade meet the current IPW:UK Women's Champion, Tennessee Honey. Tennessee Honey as been one of the stars of the IPW:UK academy and likewise Nightshade has been making a name for herself in WrestleForce. This contest will be a great showcase of the best of both companies. One of the most successful teams in the history of IPW:UK will face one of WrestleForce's most popular team on Sunday as the Swords Of Essex compete against the Tassle Tusslers. While Peace & Brad O'Brien may well have the crowd behind them, Will Ospreay & Paul Robinson certainly will not after their change in attitude. Swords Of Essex have claimed that after breaking their backs for IPW:Uk, they are going to return the favour. The Tassle Tusslers will need to do all the can to make sure they are the first on the list. The main event on January 17th in Harlow will see DND defend their IPW:UK Tag Team Championship against former champions, The London Riots. Normally this would be a great match under standard rules. However, this time those rules will not apply as the championship will be up for grabs in a Tables, Ladders & Chairs contest. The London Riots are known for their violence but DND have not backed down from a single challenge put in front of them since becoming champions. This match will be no different. IPW:UK make be making their first trip to Harlow this Sunday but it promises to be a debut to remember.

‘The Beast Of Belfast’ Big Damo vs Donovan Dijak

*10-Man Over The Top Rope Rumble*
Scott Star vs. Lance Lawrence vs. eXodus vs. Mike Broly vs. Garry Mitchell vs. Mountain Stew vs. The Omega vs. Dean Michael vs. The Ruckers (Nick & Jordan)


That wraps up this week's preview of the weekend's wrestling schedule. Of course, there are many more events taking place over the three days. To find out more about the shows we've highlighted here as well as all the others, check us out at www.wrestleropesuk.wordpress.com for the latest show and match announcements, British Wrestling event list and more.
Posted by QTPW at 20:10