We're back with another bumper weekend of British Wrestling events this week. This weekend we shall see Grand Pro Wrestling come 'Back With A Bang', witness an 'Outbreak' at Alpha Omega Wrestling and see what happens when you 'Chat Sh*t' at PROGRESS Wrestling. Let's get Ready For The Weekend! 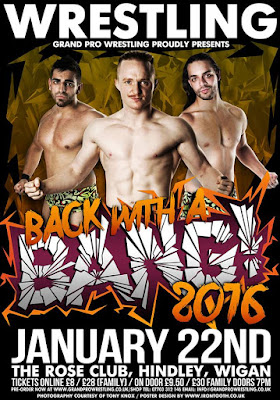 Kicking off the wrestling weekend on Friday night and Grand Pro Wrestling are at The Rose Club in Hindley, Wigan with 'Back With A Bang 2016', their first show of the year. The event shall see The Island Brothers together as a team for the first time in over a year. Their opponents, The Bad Lads have been growing stronger as a team in the time that The Island Brothers have had other issues to deal with. Now the brothers are back together they will be looking to regain their place in the tag team division but face a big challenge right out the blocks. The GPW Tag Team Champions, Midnight Bin Collection will also be in action on Friday night as they join Joey Hayes to face The Hate League's Dylan Roberts, Danxig & Soner Dursun in a six-man tag team match. Joey Hayes has previous with The Hate League, most notably Soner Dursun who turned on Hayes during the North West League to join Dylan Roberts & Danxig. The Hate League will no doubt have their focus on winning gold in the near future and a win over the current tag team champions would certainly put them in the running for a title match. However, a win won't come easy over s
such a trio of Midnight Bin Collection & Joey Hayes. The main event for January 22nd will see both the GPW Heavyweight & British Championships on the line. At Grand Pro Wrestling's last event, Bubblegum & T-Bone ended up walking out with a different championship from the one they started the night. On Friday night we're going to see both men try to recapture the title they lost and walk away with both championships. 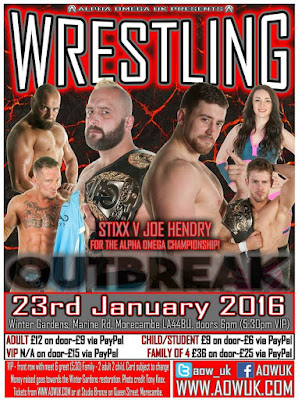 Moving on to Saturday and Alpha Omega Wrestling kick off 2016 with 'Outbreak' at the Winter Gardens in Morecambe. After Chris Ridgeway's narrow loss to Stixx for the Alpha Omega Heavyweight Championship at 'Fightmare Before Christmas', Sam Bailey tweeted to Ridgeway to “keep his chin up” and that his “chance to shine would come”. Chris Ridgeway did not appreciate to encouraging words and a war of words was soon being traded on social media. Alpha Omega Wrestling never being a promotion to shy away from letting issues be settled in the ring have therefore scheduled a match for January 23rd between the two. Sam Bailey is one of the most popular men in AOW history, Ridgeway one of the most hated. Bailey will look to make his return to Morecambe a winning one. Chris Ridgeway looks to show Bailey that his time is right now and he's already shining bright. Since their arrival, The Referendum have been in pursuit of championship gold. A pursuit that they thought may soon be over when they were involved in a tag team match with Sexy Kev & Mr Big Shaun Vasey to crown the Alpha Omega Tag Team Champions. However something happened that The Referendum had never experienced before. They lost. When they then lost another chance to win gold, their leader, Laird Grayson (who was suspended) used a steel chair on Big Sexxxy. Tired of the oppression that The Referendum have forced on Alpha Omega Wrestling, Big Sexxxy challenged The Referendum to a street fight which The Referendum accepted on the conditions that the championships were on the line and that Laird Grayson would be reinstated if they won. The champions accepted the conditions. However Alpha Male Stallion added one of his own. If Big Sexxxy win on Saturday, Laird Grayson isn't suspended, he's fired! The main event at 'Outbreak' shall see Stixx defend the Alpha Omega Heavyweight Championship for the first time since his win. A win which he did not get to celebrate after being attacked by 'Local Hero' Joe Hendry just minutes after claiming the prize. Stixx wants revenge for his moment being taken away and he's prepared to put the championship on the line to do so. If Stixx allows his rage to take over then Stixx might not only be the first ever Alpha Omega Heavyweight Champion, he might be the shortest reigning one as well. 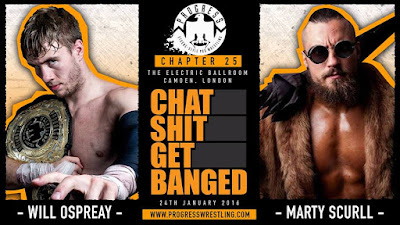 The weekend is rounded off with another sold out event from PROGRESS Wrestling who are back at The Electric Ballroom in Camden, London with 'Chapter 25: Chat Sh*t Get Banged'. The main event for January 24th shall see the PROGRESS Champion, 'The Aerial Assassin' Will Ospreay defend the championship against 'The Villain' Marty Scurll. This match came about after Marty Scurll took it upon himself to attack Ospreay after a successful title defense in Manchester. Threatening to break the champion's arm unless he was given a championship match, PROGRESS management were given no choice but to agree. Scurll then showed why he is known as 'The Villain', smashing Will Ospreay's arm with a steel chair anyway. Since then, this match has become personal with Ospreay asking for the match to be no disqualification which was granted. Yes, there is gold up for grabs on Sunday but it's more than that. It's personal. Whoever walks away with the PROGRESS Championship will have the luxury of knowing who their first challenger will be as 'The Star Attraction' Mark Haskins and 'Liverpool's No.1' Zack Gibson will compete to become the number one contender to the PROGRESS Championship on Sunday. Both of these men have an impressive run as of late with neither being defeated in recent months. Both have a valid right to challenge for the gold but only one man's run is continuing past January 24th. For anyone who follows PROGRESS Wrestling and their ENDVR events will know, the women of PROGRESS have been at the forefront. They have main evented shows and delivered show-stealing contests every time. Now they are going to show once again what they can do when Pollyanna, Toni Storm, Jinny & Dahlia Black compete in a fatal four-way match this Sunday at 'Chapter 25: Chat Sh*t Get Banged' in Camden, London.


*PROGRESS Championship: No Disqualification*
‘The Villain’ Marty Scurll vs ‘The Aerial Assassin’ Will Ospreay (c)