WWE's Undertaker - The Streak 21-1 is out now on DVD and Blu-Ray, available from www.wwedvd.co.uk and all reputable home video stockists. The five disc set features The Undertaker's 22 WrestleMania matches up until 2014, including matches against the likes of Shawn Michaels, Edge, CM Punk, Ric Flair and Triple H! This set is available with a pretty cool coffin case, as well as various other extras (pictured below), but we'll be focusing on the DVD content in this review. 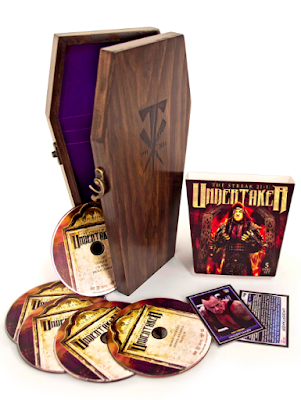 It's safe to say that this is the weakest disc of the set, as we begin with The Undertaker quickly dispatching of "Superfly" Jimmy Snuka (WWF WrestleMania VII, March '91). Jake "The Snake" Roberts then works hard to put 'Taker over (WWF WrestleMania VIII, April '92), in a slow and plodding affair. It's then on to the first true stinker of the collection, with Giant Gonzales stumbling through a truly terrible contest (WWF WrestleMania IX, April '93), with a mind boggling finish. A match with King Kong Bundy (WWF WrestleMania XI, April '95) isn't much better either, the only reason anyone should ever watch these two matches is to see all of The Streak bouts.

Whilst it's a little lengthy for what it is, a bout with Diesel (WWF WrestleMania XII, March '96), at least, shows signs of what the Deadman is capable in the ring. The back and forth action make this a pretty easy watch, even though it never threatens to become a WrestleMania classic. The disc closes with a No Disqualification match over the WWF World Heavyweight Championship with Sycho Sid (WWF WrestleMania 13, March '97), which is a match, that is not terrible. I think that might be the best compliment I can give it, as it suffers from the timing issues that the year before had.

One of Taker's most infamous rivals is up next, in a decent, if anti-climatic brawl, with Kane (WWF WrestleMania XIV, March '98). A Boston crowd that doesn't seem to want to buy what the future Brother of Destruction are selling, make it even hard to get into years later on Home Video. The most notable thing about the Hell in a Cell match with The Big Bossman (WWF WrestleMania XV, March '99) is that the infamous hanging at the end of the bout has been cut for obvious reasons, the match itself is certainly not the best example of the gimmick.

An all-out war with Triple H (WWF WrestleMania X-Seven, April '01) is the first really good match for the streak, featuring lots of big moves and a handful of nice false finishes. However, it arguably goes a little too long, with a crowd brawling sequence that takes a long time to produce fruit. A clash with Ric Flair returned to No Disqualification rules (WWF WrestleMania X-8, March '02), with the commentary team of Jim Ross and Jerry "The King" Lawler managing to add a whole extra layer to the earlier part of the the bout that might have dragged otherwise. The Toronto crowd are hot for pretty much ever near fall however, and despite the contest itself not being either man's finest, between the commentary and crowd you've got a pretty good watch here as well.

With the streak managing to gather speed and become more referenced on-screen, a Handicap match with The A-Train and The Big Show (WWE WrestleMania XIX, March '03) is curious and whilst it might not be any good, at least Nathan Jones didn't tag with 'Taker as was the original plan! A second bout against Kane (WWE WrestleMania XX, March '04) fails to live up to the pomp and circumstance that surrounds it.

The third portion of the set kicks off with a belting contest with Randy Orton (WWE WrestleMania 21 - April '05), that features some nice reversal sequences and strong near falls. A Casket Match with Mark Henry (WWE WrestleMania 22 - April '06) is a paint-by-numbers affair, that beyond one hugely impressive spot is nothing special. Batista provides a game opponent in a World Heavyweight Championship match (WWE WrestleMania 23 - April '07) with the two turning on drama in an intriguing face vs. face set up. This is a big brawling style bout, with both men putting a shift in to create a match that is often overlooked.

Up next, Undertaker once again challenges for the World Heavyweight Championship against Edge (WWE WrestleMania 24 - March '08), in another underrated epic. There's drama, superb storytelling, lots of sweet counters and a satisfying finish, making this the strongest match on a disc of strong matches.

The first match with Shawn Michaels (WWE WrestleMania 25 - April '09) opens the fourth disc and if you haven't seen this match yet then you're probably not even a wrestling fan. A compelling thirty minutes of action make it hard to look at anything else but the screen, as two legends work their magic in front of a captivated 72,000 fans. The narrative is dramatic, with plenty of false finishes, that are sold by both men to perfection as they have everyone watching eating out of the palm of their hands.

If that wasn't enough then we're straight into the rematch (WWE WrestleMania XXVI - March '10) with the extra element of Shawn Michaels' career being on the line in a No Disqualification style outing. There's plenty of nods back to the earlier bout, as the 2nd match arguably manages to match the 1st, with an emotionally charged finish perhaps giving it the nod.

But there's even more great stuff on this disc as Triple H gears up for his second shot at the streak in an epic No Holds Barred collision (WWE WrestleMania XXVII - April '11). A much more brawling contest than the previous two bouts with HBK, have a more physical edge, that makes it stand out from what has just been seen. The match peaks at the right times, with some brilliant storytelling in the closing stages.

With Triple H becoming the first person to face Undertaker three times, a Hell in a Cell match (WWE WrestleMania XXVIII - April '12) is fitting conclusion to their trilogy. In my opinion it's the strongest of their matches, as with the addition of Shawn Michaels as Special Guest Referee there's a lot more emotion involved an the storytelling has a richer quality than the previous two encounters between the two. Whilst parts of the match drags ever so slightly, there is also one of the best false finishes throughout the entirety of the streak featured in this match.

Another cracking match follows with CM Punk taking his shot at The Deadman (WWE WrestleMania XXIX - April '13) which mixes elements of the technical and brawling styles that had been seen in the last few clashes, but pulls out some of it's own submission-based moments, which are a nice addition. With a much more personal element (due to Punk using the death of Undertaker's longtime manager Paul Bearer in the build up), I can forgive the match not quite being as slick as it could have been at times.

This DVD is a long watch, across five discs and lasting over ten hours, it's a pretty big commitment to make to watching one wrestler's matches! However, if you manage to stick through the first disc and the majority of the 2nd, then you'll be rewarded with some great wrestling in the last three discs, which feels even more satisfying because of the stuff you've seen Undertaker go through in the previous matches!

Personally, I think every wrestling fan should spend time watching the Streak back to back, to get a grasp for exactly how it was crafted and become such a phenomenon by the mid-2000's and beyond. If you also want a piece of cool memorabilia (only 2101 sets will be produced in the UK) then there aren't much better ways than this nifty DVD set.