On the 9th February 2016, TNA aired the 604th edition of Impact Wrestling. The show featured Drew Galloway and Kurt Angle facing off for the second time in five weeks and Beer Money clashing with The Decay...but was it any good?

This review is (in part) made up of material from our Live Event review from the tapings, which can be found here (Includes spoilers for Impact Wrestling #605)


matt hardy has stuff to say 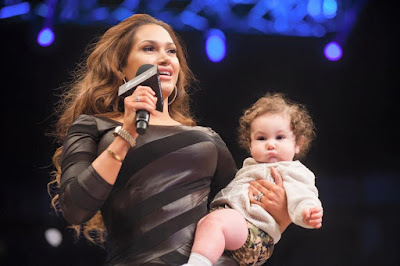 The show kicked off with TNA World Heavyweight Champion Matt Hardy, alongside wife Reby, infant son Maxel and bodyguard Tyrus, and this was an interesting one. The trio got a load of heat from a lively Manchester crowd, who weren't afraid to let the villainous group know how they felt. Whilst the jist of the segment was that Hardy wanted Dixie Carter to fire Ethan Carter III later in the night, the thing I'll take away most from this was the epic "Who are ya?" chant that Reby Sky got. It completely drowned out her entire promo. There was also a clear edit from the live promo, where instead of saying "(Jeff Hardy) won't be here, Eric Young ended his career" as he did on TV, he said something to the effect of "(Jeff Hardy) won't be here and he never will be" in reference to Jeff being unable to enter the UK because of his drug offences. 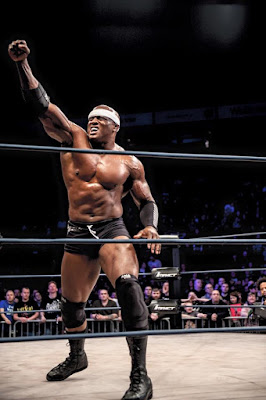 Hmmm...this bout was a weird one. It was clearly being used to build Lashley as a force to be reckoned with, for his match with Kurt Angle in a few weeks time, but if that was the case the finish was certainly overbooked for it's needs. The wrestling content was fine, if not a little basic and Eric Young managed to work the crowd at ringside up nicely, being the most over element of the match. However, the aforementioned finish saw Bram hit his Brighter Side of Suffering finisher, and then Young jump onto the ring apron with King of the Mountain Championship, convincing Bram to lift up Lashley for a belt shot (which would have lead to the DQ) before Lashley ducked, hit a Spear and won the match. Maybe the commentary team will make more sense of this on TV than I could live. Josh Matthews calling the match a "galactic collision" before the bout began was utterly ridiculous. 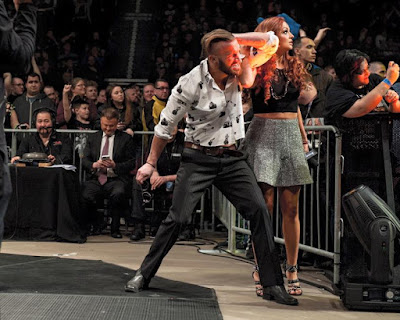 Another slightly bizarre segment here. Firstly, Kurt Angle's crowd pleasing promo about his times coming to the UK was lovely. You know the like, "Manchester is awesome" "You fans are the best in the world" type thing that makes the crowd go "Yeah, we're in Manchester". Having Mike Bennett and Maria interrupt was where I was expecting business to really pick up and in a way it did and in a way it didn't. Bennett handled himself well on the microphone, cutting a promo about being a child and telling his Mom that one day he'd beat Kurt Angle, that was well paced and with an entertaining cadence. But then Angle said something and twatted Bennett in the face. Drew Galloway then came out and stood on the ramp. The promo really made me want to see Bennett get an opportunity against Angle, as they had weaved a great story for the match already, but with the two not scheduled Angle, I was a little confused at where the pay-off would come.

fast-forward...Bobby Roode gave James Storm a gift, it was the return of THE BOOZE CRUISER!... 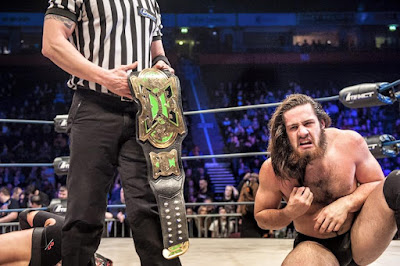 Lee and Uno put on a decent contest, but one that barely scratched the surface in terms of what a talent like Lee can do in the ring. With only five minutes allocated, and the duo still seemingly unable to connect in the ring, this wasn't the best example of X Division action that one could find. The finish did however continue to build on Lee's relationship with Helms as the former WCW World Cruiserweight Champion's interference allowed Lee to hit a Small Package Driver to retain his title. The Manchester crowd came off as pretty indifferent here, for two guys who haven't received much off a push on TV as of yet. 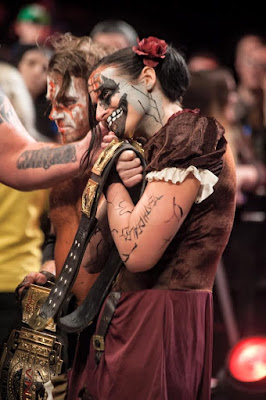 The build towards Beer Money vs. The Wolves continued here, with Beer Money attempting to cash-in their Feast or Fired briefcases for TNA World Tag Team title shots. Of course, The Decay (Abyss and Crazzy Steve with Rosemary) had previously stolen the physical belts, so Manchester actually ended up with a Beer Money vs. Decay match instead. The match had a basic tag team structure for the most part, with the crowd being completely into Beer Money's comeback as they ran through a number of their back catalogue of sweet tag team moves. The finish was a bit flat however, as after Storm and Roode had hit the DWI on Steve, Abyss pulled the referee out of the ring, causing the Disqualification. Josh Matthews hollering "And Abyss steals the victory" didn't actually make any sense. However, with The Wolves coming out to make the save and challenging The Decay to a Monster's Ball match next week, I'd have preferred to have seen The Decay presented as a bit more dominant than they were in this match.

fast-forward...Reby Sky went to talk to Dixie Carter backstage, in an attempt to sway her decision to fire Ethan Carter III later in the show...Grado returned, but got chased away by Eli Drake and some security... 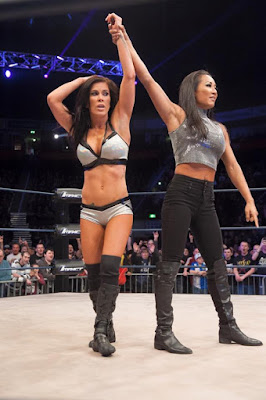 The Knockout's action of the night, was physical contest between The Dollhouse's Jade (with Marti Bella and Rebel, but without Awesome Kong)  and The Beautiful People's Madison Rayne. For me, this could have gone a little bit longer, as the two looked like they could have put together a good match, if they were given the time. After Jade had picked up the win with a Package Piledriver, Gail Kim was out to make the save for Madison, with Velvet Sky conspicuous in her absence.

fast-forward...Grado tried to convince Billy Corgan that he'd been screwed, but security escorted him from the building, not before Eli Drake punched him in the face though... 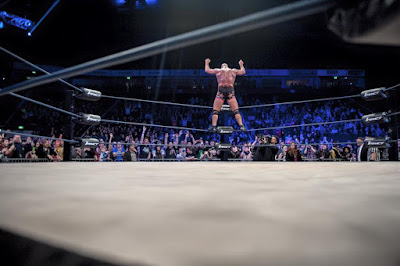 In the main event and match of the night, Drew Galloway avenged his loss to Kurt Angle earlier in the year. The two went at it hammer and tongs for most of the match, trading big moves and near falls, with Angle hitting a sweet looking Angle Slam on the steel steps, before delivering another that had most of the crowd convinced it was over. The long spells of submission based action were reminiscent of Angle's WWE tangles with Chris Benoit, as the two exchanged Ankle Locks and a new hold that seemed to be a Crossface/Scissored Armbar variation, that would eventually gain Galloway a surprising submission victory. Angle pouring blood from his mouth following a Claymore kick provided an incredible visual for the closing submission sequence, being uncomfortable to watch at times and making ANgle look like a bad ass for continuing. For my personal taste, I wished the bout had been afforded a bit more time to settle in at the beginning, seemingly going straight into the big moves and near falls. For example, the match came out of it's ad break with Galloway in an Ankle Lock. Still, this was still a very good bout that should have ended the show and should do a lot for Galloway as he continues to grow in TNA, with a future World Heavyweight title shot in his future, thanks to the Feast or Fired briefcase. 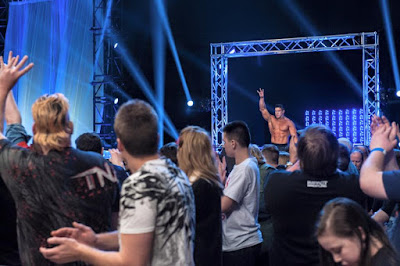 The show closed with a continuation of the opening segment, with Matt Hardy was out to get Ethan Carter III fired, in an entertaining in-ring segment. The crowd being so into all the performers, especially Hardy and EC3 helped this greatly and seemed to allow the performers to bring even more energy into their act. Rockstar Spud's TNA return was handled nicely and he arguably pulled out the best spoken performance of the evening, cutting a lovely promo about his past with EC3 and why Dixie Carter shouldn't fire him, before getting taken out by Hardy and Tyrus. With EC3 returning and and completing his babyface turn taking Matt Hardy's security and Tyrus, before Hardy managed to escape behind wife Reby, the table was set for their feud to continue.

Kurt Angle and Drew Galloway easily had the best match of a show that suffered from a couple of strange booking decision. The finish to Lashley vs. Bram, Mike Bennett's interuption of Angle that went nowhere, Trevor Lee still to show his potential and the hodge podge finish to The Decay against Beer Money, all left me scratching my head. However, there was a clear drive in terms of storyline development with things being set up for future episodes, including The Wolves vs. The Decay in Monster's Ball next week. Matt Hardy and Rockstar Spud both put in strong efforts on the microphone, and the return of rejuvenated Ethan Carter III looks set to drive TNA over the next few weeks.

*All photos courtesy of TNA Wrestling.
Posted by QTPW at 22:12