On the 16th February 2015, the 605th episode of TNA's Impact Wrestling aired on Pop TV. The show featured The Wolves defending their TNA World Tag Team Championships against The Decay's Abyss & Crazzy Steve and TNA World Heavyweight Champion Matt Hardy teamed with Tyrus to face Ethan Carter III and Rockstar Spud...but was it any good? Let's find out!

fast-forward...A recap from last week's show featuring The Wolves challenging The Decay to a TNA World Tag Team Championship match, with Abyss making the match Monster's Ball and TNA World Heavyweight Champion Matt Hardy failing to make Dixie Carter fire her nephew Ethan Carter III...In a backstage area, Dixie Carter revealed to Ethan Carter III that he'd face Matt Hardy for the TNA World Heavyweight Championship inside a Steel Cage at Lockdown in London next week, before EC3 said he'd be heading to the ring to kick off the show... 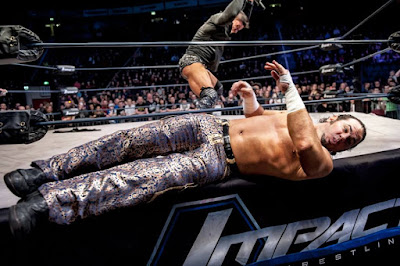 Ethan Carter III was out to cement his babyface turn and open the show, with the former TNA World Heavyweight Champion calling out Tyrus for a fight, after accusing the former Funkasaurus of breast-feeding Matt Hardy's child. There was an awful lot cut from EC3's opening speech from what was heard in the Manchester Arena, as his ass-kicking babyface who swears a lot character was toned down a hell of a lot, with absolutely no reference to the poop chute or any other orifice. Obviously this lead to ambush attack by Hardy, with EC3 managing to escape unharmed, and it was confirmed that Hardy & Tyrus would team up to face EC3 and a partner of his choice later on in the show. 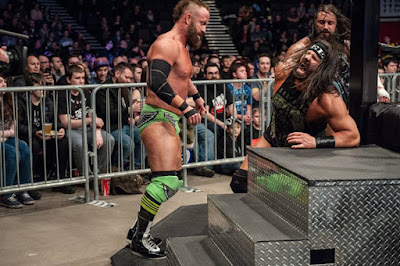 James Storm and Eric Young are two very competent workers inside the six sided ring and it would be difficult to fault anything they did inside that ring. However, they did both seem to go through the motions in this one as the trod water until the messy DQ/non finish thing that happened. I'm not even sure what did happen here, but it ended up in Bram and Bobby Roode both getting involved and the match seemingly being thrown out. There was however a cool crowd brawl that followed, with James Storm throwing beer over Bram. With the two teams facing each other at Lockdown next week, I suppose this arena wide brawl was to push what the two teams would do when confined to the six sided ring and we'd see it continue throughout the night.

fast-forward...Drew Galloway approached Ethan Carter III about being his partner in the main event, with EC3 claiming he wanted to "go it alone"... 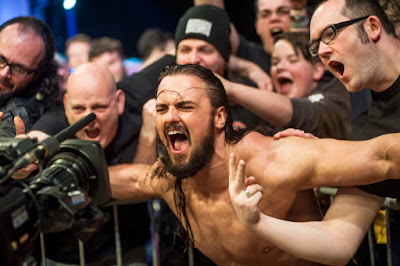 Mike Bennett (with Maria) continued his feud with Drew Galloway, cutting a post-match promo about both his rival and the man we saw him with earlier in the night, Kurt Angle, before calling out Mandrews for a match. This was another bout, that having Mandrews and Mike Bennett elsewhere, felt like it could have been so much better, but did the job it needed to do for TV. Bennett looked impressive in his comfortable victory. However, the finish came across as a little bit messy, as Bennett hit a Rope Hung Cutter, a wrist-lock transitioned into a right hook and then his Divine Intervention Samoa Driver to put Mandrews away in an over-crowded finish. Galloway was out to make the save when Bennett tried to do even more damage. The commentary was utterly useless throughout, never making me feel like Mandrews could pull off the upset, even when on offense, with Pope especially content to run-down the 24 year old from Cardiff, who is still without a singles win on Impact Wrestling and hasn't picked up a victory on TV since his October victory over Crazzy Steve on Xplosion.

fast-forward...The Decay's promo was interestingly shot through a grate, but fuck that shit, Jimmy Havoc debuted to reveal he's got some kind of past with Rosemary, sweet baby jesus...A recap of Kurt Angle's TNA World Heavyweight Championship victory over Lashley from the Impact Wrestling #557 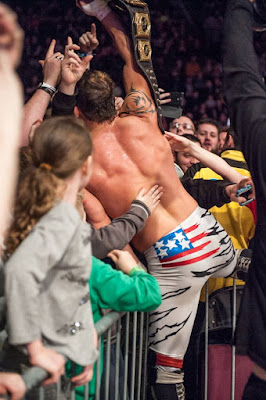 This match was everything I wanted to be, as The Wolves and The Decay ran through a series of great spots and got all kinds of weapons involved in the action. Davey Richards suicide dive that sent Abyss crashing through a barbed wire board stands out particular, alongside Crazzy Steve getting whacked with Janice (with a Steel Chair getting in the way, to stop, you know, death). The story of the match with Davey Richards struggling to see following some red mist from Steve came across much clearer on television than it did inside the arena, with Josh Matthews keeping it in the mind of the home viewer nicely on commentary. He let himself down with the line "Davey Richards sucking the mist out of the mouth of Rosemary" however. The finish was a little bit of weird one again, as Eddie Edwards held an interfering Rosemary in place, and Richards threatened to hit her with a cheese grater, before deciding to plant a big ol' Ric Flair-esque smooch on her. It was a bit uncomfortable to watch, but the reveal that Richards' had somehow nicked Rosemary's green mist, was a pretty cool moment. The Wolves hitting their version of Chasing the Dragon onto a steel chair covered in thumb tacks ended the match on a high point, seemingly putting The Wolves vs. The Decay feud to bed. Easily the best match of the show as Richards & Edwards picked up their fifth defense of the titles since winning them from Brian Meyers & Trevor Lee on Impact Wrestling in September.

fast-forward...Ethan Carter III reminded Rockstar Spud that he wanted to face Tyrus & Matt Hardy on his own 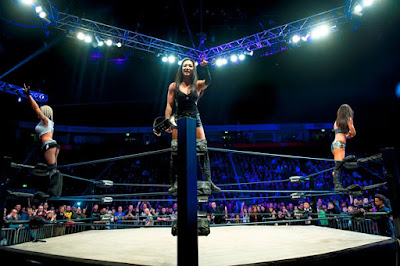 It seemed like the crowd couldn't have cared less about this week's women's bout, as this tag match played out to almost complete silence. The babyfaces won with a roll up from Madison Rayne, but beyond that there was nothing memorable from this short 4 minute encounter. In almost a mirror image of last week's women's match, Velvet Sky came out to make the save after The Dollhouse attacked Gail and Madison post match. Velvet got a strong reaction from the Manchester Arena though, cutting a passionate promo challenging The Dollhouse to a Lethal Lockdown bout in London next week.

fast-forward...Mahabli Shera bought out his new friend, Odarg the Great, in a bizarre backstage interview...Beer Money were still brawling backstage with Eric Young and Bram, before Bobby Roode issued a challenge for a Steel Cage match, next week at Lockdown... 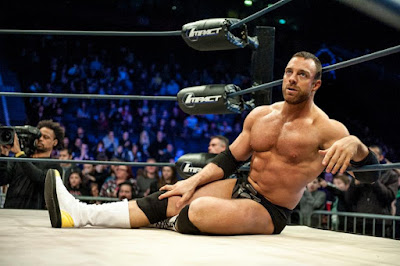 I popped hard for Odarg the Great, due to silliness of the whole storyline. Basically, if you hadn't worked out, Great is Grado under a mask. The match got a decent amount of time for a comedy bout, with Mahabli Shera working as the face in peril, as the crowd got ready to erupt for a Great hot tag! Pulling out all the signature moves, I couldn't have been happier with how this match went, as Shera & Great picked up a roll-up victory, as Drake had managed to un-mask the new comer, giving Grado (or Odarg) his first TV victory for TNA since last June. Utterly ridiculous stuff, I can imagine this might not be some people's cup of tea, but those people need to lighten up a bit! Long live Odarg the Great! 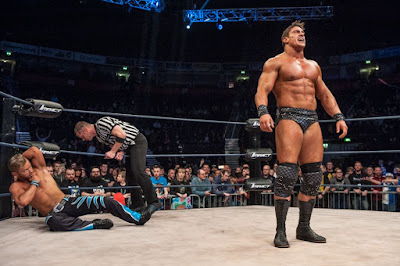 With the main event being the fourth tag team match in a row, it has to be said that there was more than a little of a burn out effect by the time the bell rang to start this one. The narrative played out rather nicely, with Ethan Carter III coming out on his own and getting battered by Matt Hardy & Tyrus, before Rockstar Spud came out to be his partner. However, despite EC3's partner being no massive surprise, we did get a well played moment where after having an opportunity to tag in Spud, EC3 tried to keep going on his own, adding a decent layer of drama to the bout. A stand out moment from the bout saw EC3 go for a dive off the top rope to the outside, with Tyrus and Hardy failing to protect him properly, leading to EC3 face planting the floor in what looked like a pretty nasty bump, which actually looked much worse on TV than it did in the arena. Despite the drama, the finish was a little rushed, but EC3 getting a clean pinfall on Hardy after a One Percenter at least allowed EC3 some legit momentum heading into his TNA World Heavyweight Championship rematch next week and ended the show on a crowd pleasing moment. 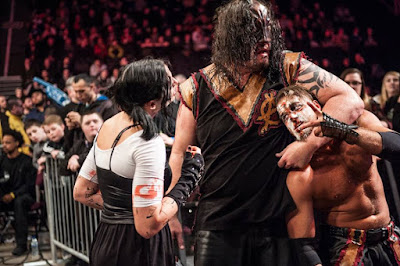 An improvement on last week's score of 4.4, as well as the score for this TV taping as a whole (4.52) this was a slightly better episode, that takes the Episode of the tour crown for the time being. The Monster's Ball bout over the TNA World Tag Team Championship, as well as the tag bout that saw Rockstar Spud offer his help to Ethan Carter III against TNA World Heavyweight Champion Matt Hardy and Tyrus, both played their part producing two very different matches. One saw a feud end in utter chaos, whilst the other escalated a rivalry for a World Heavyweight Championship match next week. Personally, I felt the Monster's Ball match would have been a better fit as the main event of the show, because anything that followed was always going to struggle to compete with the violence, as we saw the women's tag team match suffer for going on straight after it. Overall, this wasn't the best two hours of wrestling you'll find, but it was watchable throughout with anything that wasn't particularly great no sticking around for too long and with two quality tag team matches as well.
Posted by QTPW at 00:51