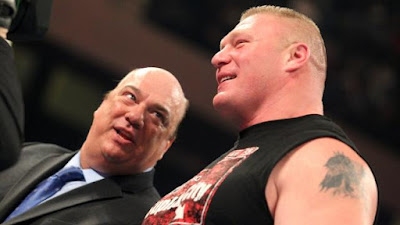 You can't really go wrong with a Paul Heyman sermon to open up Monday Night Raw, can you? Heyman was on stellar form as he ripped into Brock Lesnar's opponents at Fastlane, Dean Ambrose and Roman Reigns. The promo walked a fine line between comedy and seriousness, especially when Heyman began listing various nicknames for Ambrose based around his "Unstable" gimmick. Luckily, this part went just long enough to lead into a Dean Ambrose interruption, getting a decent pop out of the crowd. Ambrose getting in Lesnar's face and declaring he wanted a trip to "Suplex City" added a new dimension to the triple threat at Fastlane and allowed Ambrose to at least seem like a viable challenger to Lesnar and Reigns. The Lunatic Fringe did seem a little nervous here and stumbled over a couple of his lines, but when opposite The Beast Incarnate it did add a touch of realism to the whole segment. I mean, who would shit themselves when looking at Brock Lesnar? This was a nice change of pace for the regular Authority segments that have kicked off RAW recently, but I was surprised to see nothing built for the rest the show. 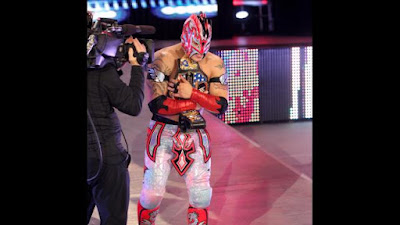 After a couple of weeks trying to find his feet as United States Champion this bout provided Kalisto with a solid foundation on which to build upon. He has a surprising amount of chemistry with Rusev in the ring and the two worked well together throughout to produce a decent opening match. The storytelling was simple, taking the obvious power vs. speed route, but was done well enough that it held my attention throughout. Rusev managing to keep the King of Flight grounded, including answering a slingshot attempt to the outside with a well-timed superkick and the Bulgarian Brute's ongoing frustration at not being able to put the Champ away were both played well in-ring, with Rusev in particular putting on a impressive facial display. The finish was a mild disappointment with Kalisto hitting a hurricanrana that sent Rusev into the barricade to claim a countout victory, but it still allowed the smaller man to maintain some momentum heading into a Fastlane rematch with Alberto Del Rio.

the usos defeat the social outcasts 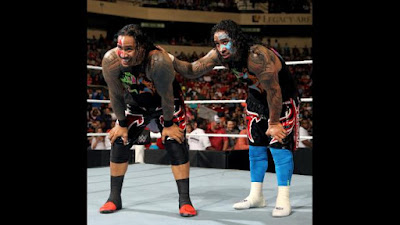 A basic tag team encounter here, as The Usos took a leaf out of The Young Bucks book and provided a superkick party for The Social Outcasts' Adam Rose and Curtis Axel. Beyond the finish this was a paint-by-numbers tag team action supposedly designed to get The Usos back on a roll after they lost to The New Day a few weeks ago at the Royal Rumble. The twins looked great in the closing stages of the match, putting on an exciting display managing to take out Rose and Axel, as well as Heath Slater at ringside, before closing the deal with a Not Superfly splash for the W. Perhaps the biggest talking point of the bout however was Lilian Garcia referring to the Usos as "Grammy award winning" rather than "Slammy award winning" and the fact that WWE decided to replay it on TV. It's pretty much common knowledge that Lilian is not the greatest ring announcer in the world and it seems that WWE only keeps her on the books so that they can take the piss out her on a regular basis. Bless her. 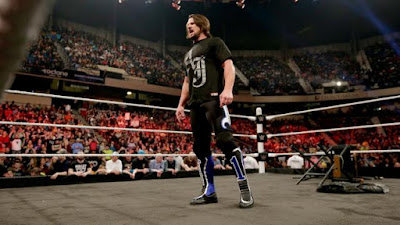 Could there be a more WWE segment to put AJ Styles into than Miz TV? Interestingly what we got was the Miz talking for AGES before Styles twatted him a few times. I quite liked the idea of having Miz explain who Styles is, as firstly it would clearly piss off a certain section of fans, but also allowed those who didn't have a clue who Styles is a chance to have a recognisable face basically put him over for five minutes. Having Miz compare Styles to his former NXT rookie Daniel Bryan was also an interesting development, that will surely get fans wet with anticipation of a WrestleMania dream match, but more likely that not was just clever way of using Bryan to boost Styles' popularity amongst the WWE die-hard fanbase. With a match set for Thursday Night Smackdown, it looks like the two will be having a bit of a mini-feud.

fast-forward...Highlights from the opening segment with Brock Lesnar, Dean Ambrose and Paul Heyman... 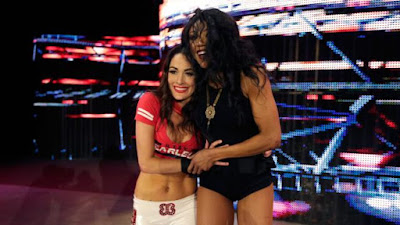 Brie Bella picked up a surprise victory of Charlotte, marking her first TV victory of 2016 and her first win on Monday Night RAW since the end of October! The bout was scrappy at best with the two failing to connect during the match that was mainly focused on the antics of Ric Flair at ringside. It would seem that Flair and Charlotte are being positioned for a break-up feud heading into WrestleMania with a babyface Nature Boy being used to make Charlotte and even bigger heel heading out of the event. Having Brie sneak a victory following Flair doing some random shit on the apron, provides a little mini-feud for Charlotte over the next few weeks, that keeps her away from Becky Lynch and more importantly Sasha Banks allowing that feud to be bought to the boil just in time for an epic WrestleMania encounter.

fast-forward...Highlights from last week's Thursday Night Smackdown main event, between The Wyatt Family and Roman Reigns, Chris Jericho & Dean Ambrose, including The Big Show making the surprise save for the babyface team... 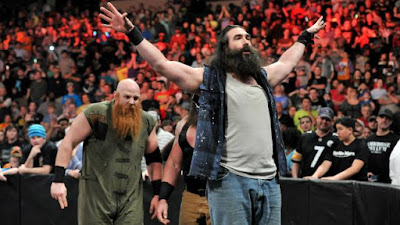 A memories from their epic "Stairs" match from the tail end of 2014 came flooding back, Erick Rowan and Big Show put on a five star clinic, that had the crowd going apeshit from start to finish. I'm sure in some alternate universe that is exactly what happened. However, in our universe, Show squashed Rowan in minutes, winning with a Chokeslam. The Wyatt Family's Bray-less beat down of the giant post-match was mildly entertaining, even if them slamming Show onto some steel steps didn't quite have the visual effectevisness required. This is not a feud that anyone has been asking for. 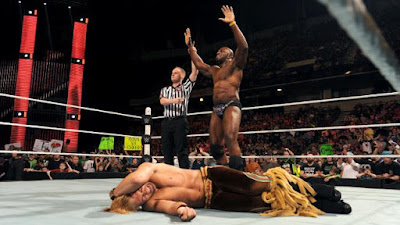 Poor old Tyler Breeze hasn't been having a great time since being called up the main roster, has he? Still, he made Titus O'Neil look like a beast here bumping around for the bigger man before succumbing to the Clash of Titus. There seems to be a big push on O'Neil at the moment, with the idea being that he's a bloody good guy and you should like him. Also, it's Black history month and we've got no one else to push that is black at the moment. O'Neil is a talented big guy, but without a real storyline and with such transparent reasoning behind this latest push, I can't see him getting over with the regular WWE audience anytime soon. 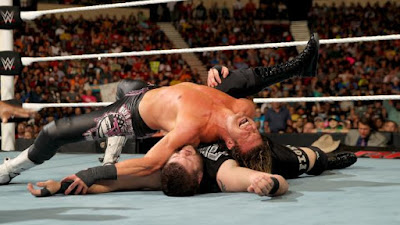 I wasn't too impressed by Dolph Ziggler and Kevin Owens outing last week, but this was a much improved effort that saw both men working hard throughout. The Prizefighter dominated for the most part, with some entertaining ad-libs as he tried to put the 2 time World Heavyweight Champion away. Ziggler's babyface selling and ability to believably fight from underneath was showcased well, as the Show Off pulled out a few tricks in order to keep himself in the match, a Fameasser on the outside stands out in particular. The commentary team actually did a pretty good job of putting over how much the bout could mean heading towards WrestleMania whilst also steadily building the in-ring rivalry that the two seem to have. I was surprised to see Ziggler pick up the victory here, his first on RAW since the end of November, but after losing on multiple occasions to Owens over the last few months, it at least provided something different as a finish for the two guys as Ziggler escaped a Pop-Up Powerbomb to hit a Zig Zag. It's a shame that these two guys will almost certainly end up lost in the mix in a few months time at WrestleMania.

fast-forward... A short package on Mark Henry to celebrate Black History Month (Mark Henry didn't appear on the show though)...

sasha banks vs. becky lynch ends in no contest 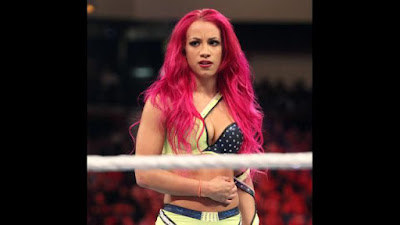 Things all kicked off with an awkward as fuck segment between Sasha Banks and her Team B.A.D. compadres, as they all agreed that they'd all stay pals but that Sasha would leave the group. For some unknown reason Tamina and Naomi decided that stick about at ringside for Sasha's match with Becky Lynch. Even Stevie Wonder saw the finish of this one coming. At least, Team B.A.D. turning on Sasha means that we now have no confusion on which side of the fence The Bo$$ is on, I suppose.  Similar to what's going on with Charlotte and Brie Bella, this story seems to be happening as a way of keeping the two away from each other for the time being. A tag bout with Becky & Sasha against Team B.A.D. is surely just around the corner.

fast-forward...Renee Young interviewed Chris Jericho, with Y2J hyping AJ Styles' match with The Miz on this week's Smackdown...R-Truth found Goldust in the toilets in a bizarre segment... 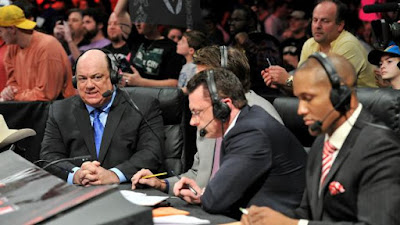 The New Day owned it with their pre-match promo, bringing a tonne of energy to the final segment. Managing to take as much as they could from last week's confrontation with The Rock and feeding it back into this week's main event, it was a shame that the trio weren't provided with an opportunity to do this earlier on in the show. This promo had me more excited for the main event than anything that had gone before it, as the group claimed the wanted revenge on The Rock, so would go after "The Rock's cousin and the Rock's cousins' friend". Incredibly entertaining but also adding a little extra spice to the action to come. Referncing Kanye West in terms of their catchphrase "booty" all earned a little referential chuckle from me. Having Paul Heyman on commentary for the action not only made use of Brock Lesnar's advocates many skills, but also offered a constant reminder that Brock Lesnar was only just around the corner. 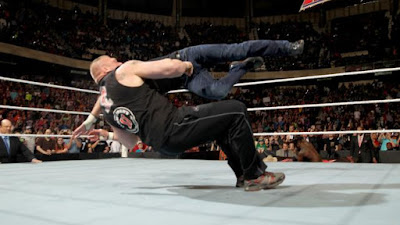 The main event was a pleasing watch that saw Dean Ambrose take the lunatic in peril role, as The New Day pulled out a series of heel tactics to remain in control of the bout. Xavier Woods continued to give the New Day the edge at ringside, keeping things entertaining with ad-libs at ringside, whilst his boys did some ground and pound work on Ambrose. The finish to the bout saw a superb flurry of action with both teams looking great after a Reigns hot tag, before Ambrose was able to finish of Big E with Dirty Deeds. Personally, I think a New Day win here, would have produced a more interesting dynamic for Reigns and Ambrose heading into Fastlane, whilst also allowing the Tag Team Champions to brag about their big victory and drive the tag team division forward. It would seem however that WWE will use Reigns being unable to help Ambrose when Brock Lesnar attacked to push the issue between the friends and drive storylines over the next two weeks into Fastlane. 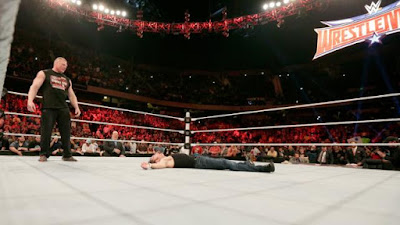 A decent effort from WWE here, but nothing that pulls up any trees that line the road to WrestleMania. The main event provided us with some decent action, whilst the New Day continued to prove why they are the most entertaining act on the WWE roster, Kevin Owens and Dolph Ziggler put on a pleasing, yet pretty meaningless outing, and AJ Styles' silent appearance on Miz TV was an intriguing way of presenting the 2 time IWGP Heavyweight Champion. A weak section at the top of the 2nd hour as Big Show's feud with the Wyatt Family and Titus O'Neil squashing Tyler Breeze were joined by an awkward bout between Charlotte and Brie Bella, as WWE struggles to fill the 3 hour time slot with enough meaningful content.