On the 10th February 2016, WWE aired the 183rd edition of NXT presented by Tapout. With seven weeks until Takeover: Dallas, the show featured Bayley defending her WWE NXT Women's Championship against Carmella...but was it any good? 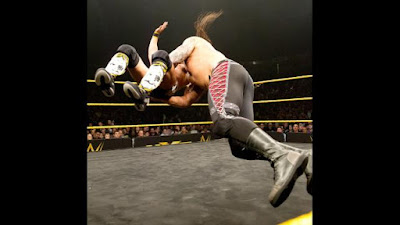 This was an enjoyable opener that played to the strengths of both men involved, with a sound booking strategy. Baron Corbin (who looks to be in much better shape at the moment) played the dominant heel for most of the match, with the crowd pouring scorn on the former NFL player through the match. Johnny Gargano took on the role of the plucky underdog picking up a number of flash near falls and hope spots, like a spear through the middle ropes, that, despite this being third singles loss in row on NXT, allowed the crowd to buy into the idea that the 2 time CHIKARA Campeonatos de Parejas Champion could upset the big man. At times I felt that match across as just a little awkward, seemingly down to Corbin still being a little bit wooden in the ring. However, the match managed to finish on a high point as Corbin feigned trying to stay away from Gargano on the outside, luring him into a wicked looking End of Days to secure his 17th victory in his last 18 TV singles matches! 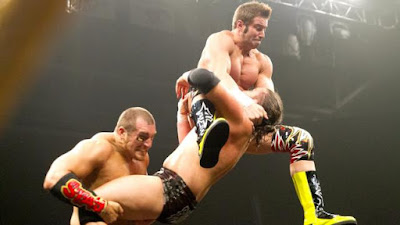 The Hype Bros still do absolutely nothing for me. As a tag team I find them annoying as fuck. Why exactly am I supposed to like these guys? Because they're hyper? No one likes things that are hype. Hyper things are annoying. A kid that's eaten too many sweet is annoying, they run about and whack you with shit and then cry about things. Why would I cheer for that? A talented wrestler might be able to pull the gimmick off, but one half of this team is Mojo Rawley. I don't need to see his belly shaking every time he's on the offence. The duo won a basic tag squash over Corey Holis and John Skyler here, picking up the victory with their Hype Ryder finish.

fast-forward...Rich Brennan interviewed both Carmella and NXT Women's Champion Bayley ahead of their upcoming title match, with the general feel being one of "may the best woman win"... 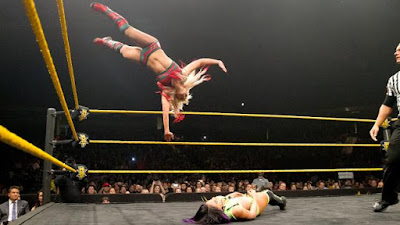 A questionable piece of booking here, as both girls are currently heel. Which meant that the crowd was flat for the action, with this not being helped by the fact that the action wasn't very good! Cameron has been wrestling since 2011, having around 50 matches a year since getting called up to the main roster (88 matches in 2014) and you honestly can't tell. She did this weird splits more at one point, I've no idea what it was supposed to be, but I know that it wasn't very good. It would seem that Alexa will be turning babyface soon (and possibly turning Blake and Murphy with her) as she picked up the win by using her old fan pleasing Sparkle Splash finish, which was probably the only highlight of a piss poor match.

fast-forward...A backstage segment with American Alpha and Enzo & Big Cass was glorious with the two teams having a lot of comedic chemistry... 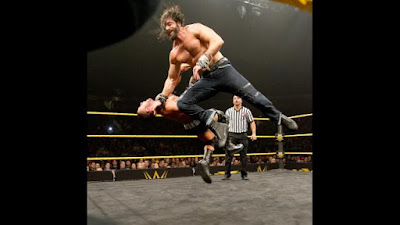 Another squash match for Elias Samson this week, as he made short work of PPW regular Jesse Sorenson, to take his undefeated streak up to four. Despite putting away Bull Dempsey, Corey Hollis and John Skyler since the middle of December, I'm still to see anything that draws me to Samson's as either a character or a performer. I'm not entirely sure what his "Drifter" character is, which is partly down to the commentators struggling to get it over to me and partly down to Samson's performance itself. Maybe it's time for him to put into a real programme with someone more experienced to help get him over with the crowd and develop his game more. Also he needs to start knackered people with his guitar, otherwise what's the fucking point of carrying that bastard to the ring? Samson won with a Snap Swinging Neckbreaker to give Sorenson a record of 0-4 in NXT. 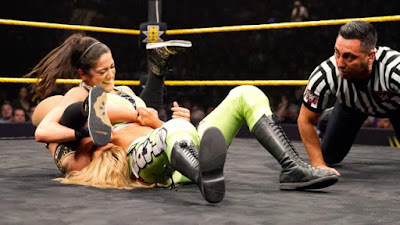 After Carmella had a sloppy match with Emma on last week's NXT, I was just a tad apprehensive coming into this one, unsure with how the match would be handled and wondering if Bayley would be able to career the less experienced Carmella to match worthy of the NXT main event. Luckily, this match was exactly the bout it needed to be, with a tight structure that managed to benefit both competitors. Bayley controlled most of the match, making perfect sense thanks to the experience edge enjoyed by the champion, with the action kept fairly simple, yet still compelling for the majority of the earlier stages. Carmella was presented as the underdog, with the idea that the champion was the better wrestler coming across strong. A huge stand out moment for me was Bayley getting pushed off the top rope and landing hard on the apron before dropping the floor, it was a turning point in the match that added another layer of story, that perhaps Carmella could win if she tried to fight Bayley instead of wrestle her. The Champion retained following a quality roll-up sequence, which was an astute piece of booking, as it elevated Carmella, who had only managed to gain a title shot with a Battle Royal victory (after only winning three matches on TV in 2015), because she only lost to a flash pin. It also played nicely off the flash victories that Carmella had gained herself over recent weeks over Emma. I feel this was the best match both competitors could have had with each other at this point in time. 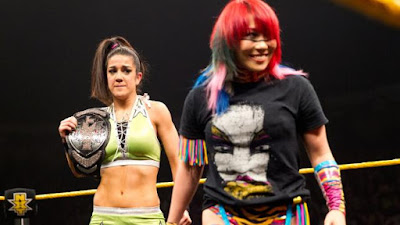 Oh boy. There's a lot to talk about when it comes to what went down after the match. Firstly, there was no Carmella heel turn which I was happy to see, then Nia Jaxx and Eva Marie made their presence felt by taking out the Princess of Staten Island on the entrance ramp, before Asuka made the save for the champ. With so much going on, we had five women spotlighted and a number of storylines advanced or started. This segment offers the opportunity for a number of upcoming matches between any combination of women involved, as NXT continues to rebuild the division following the departures of Becky Lynch, Charlotte and Sasha Banks over the summer. The seeds of a highly anticipated contest between Bayley and Asuka have been planted, expect those to be watered over the next few weeks and hopefully grow into a big ol' plant.

Following a decent opener between Baron Corbin and Johnny Gargano, this episode of NXT took a nose dive in quality as squashes matches for the Hype Bros and Elias Samson failed to impress, whilst Cameron showed exactly why she'd been sent back to NXT in a messy match with Alexa Bliss. Luckily, the show finished strong as Bayley helped Carmella to a good storytelling match, that was helped along by some tight booking, even if at times the Princess of Staten Island's offence didn't look quite as well as it should. With the show ending on a high note and highlighting five different women, as well as a potential dream match between Asuka and Bayley, I'm hoping that NXT will be able to continue to build on that and help the likes of Carmella, Eva Marie and Nia Jaxx continue to improve their in-ring work, whilst building them in the eyes of the fans, as we head to Takeover: Dallas in seven weeks time.
Posted by QTPW at 03:22