On 17th February 2016, WWE aired the 184th episode of NXT on the WWE Network. The show featured Sami Zayn and Samoa Joe battling to become the Number One Contender to Finn Balor's WWE NXT Championship...but was it any good? Let's find out! 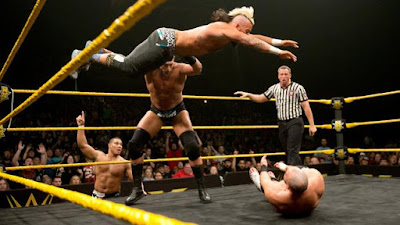 A terrific opening match here, that had the crowd lively from the start, as all eight eight men put in a strong efforts to create a busy bout. After some early shine for the babyface foursome, it was Chad Gable who worked effectively as the babyface in peril, with the heel side working well together, cutting off the ring and using all the old tricks to stay in control. Jason Jordan's come back was a delight, with his dropkick especially standing out in this sequence. The combination of Jordan's and Big Cass' hot tag sequences had the crowd losing their shit as the match built and built to satisfying climax. Just when it seemed American Alpha had captured the victory with their Grand Amplitude tag team finish, Dash Wilder broke up the fall, before Enzo & Cass hit their Rocket Launcher to claim the victory for their team. This seemingly sets Enzo & Cass up for a title shot rematch further down the line, but I'm sure American Alpha might have something to say about that in the next few weeks.

fast-forward...Deonna Purrazzo's interview with Rich Brennan was interrupted by Emma and Dana Brooke, who might quite possibly have been more orange than...well...an orange... 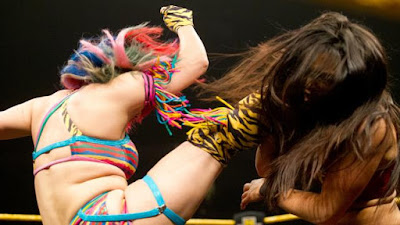 Asuka racked up her 7th singles victory on TV in a row, as she dismantled Deonna Purrazzo within minutes. Some genuinely uncomfortable moments in this one as Asuka just seemed to lay into the current ECWA Women's Champion, with stiff kicks and strikes. There was a couple of lovely sequences of action, focused on a number of submission holds, such as the Asuka Lock, that made this one stand out above your average squash match. That being said Asuka looked great, finishing Deonna off with a Spin Kick, it's surely only a matter of time before Asuka get's her shot at Bayley's WWE NXT Women's Championship.

fast-forward...A recap of Bayley's WWE NXT Women's Championship defense over Carmella from #183 aired, including the aftermath with Nia Jaxx, Eva Marie and Asuka 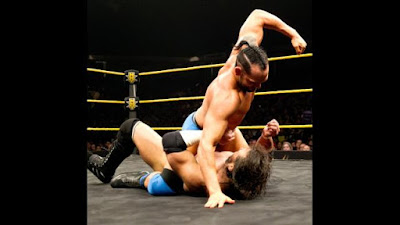 Considering my general disdain for the human embodiment of the colour beige, Alex Riley, I have to admit that I popped pretty hard when Tye Dillinger ducked through Riley's Full Nelson attempted and got a flash pin! The content of the match itself was perfectly acceptable for a quick bout, with the Orlando crowd being so into Dillinger really helping things along. I'm hoping that we'll get to see a lot more of The Perfect Ten over the next few months to really add some depth to his character, but I'm not sure even he has enough charisma to pull an interesting feud out of A-Ry!

fast-forward...Finn Balor managed to put over his WWE NXT Championship over huge in an interview with Rich Brennan whilst also welcoming any potential challenger ahead of the Number One Contender's match main event 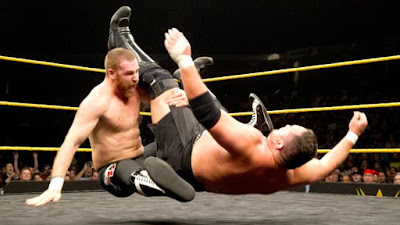 I found a lot to enjoy in this week's main event, as Sami Zayn and Samoa Joe told a solid story in front of a captive Orlando crowd. The CFE Arena seemed to be totally behind Zayn in this one, which allowed Joe to really heel it up throughout the match, as the two worked a pretty straight-forward power vs. speed type bout. Joe dominated a lot of the match, using his power and weight to stay in control, with Zayn struggling to hit his Blue Thunder Bomb was a nice little touch, that meant the move got a much bigger pop than it seemingly would have otherwise. I had a lot of time for both men's selling throughout the bout, with Joe showing everything in his face, whilst Zayn would shake his head and look almost punch drunk at times, which played nicely into both characters and the style of the match. Having heaped the match with praise, it has to be said that both men seemingly held something back, not in terms of their performance perse, but in terms of exploring exactly what they could do in the ring. But, that's okay...I think...because of this... 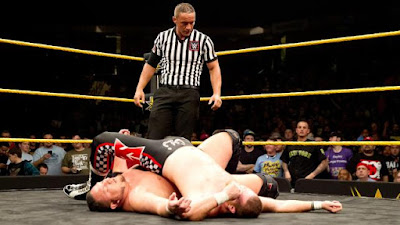 The finish had the CFE Arena on their feet as Zayn slipped free off a Muscle Buster attempt and nailed the former ROH World Champion with a Yakuza Kick. The pop when Zayn managed to connect was superb, after a few missed attempts earlier in the match. However, as can be seen above, as Zayn fell on-top of Joe both men managed to cover each other. With William Regal seemingly furious at referee Drake Wuertz the show end with yet another cliff hanger, after both men had forced Baron Corbin to submit in another #1 Contender's bout on #181. It's an interesting shift of gear for story-telling that the weekly hour format affords the show. For a TV main event this was perfectly acceptable finish that will hopefully keep viewers coming back to find out what happens next week. A rematch between the two certainly wouldn't go a miss, especially after this contest tickled my balls with what the two could potentially do inside the square circle.

After a few weeks of hit and miss TV, this felt like NXT finding it's feet again. The opening eight man tag bout was well-paced and booked well to get the best out of all eight competitors and create intrigue around the tag titles and who deserves a shot at Dash & Dawson's WWE NXT Tag Team Championships. Similarly the main event continued the build towards Takeover: Dallas, taking advantage of the shows format to do something that perhaps WWE's main brand wouldn't have been able to get away with. Joe and Zayn showed glimpses of what they could potentially do in the ring, and a rematch will now be a much bigger match than this one was. A much welcome return to form, long may it continue.
Posted by QTPW at 23:36