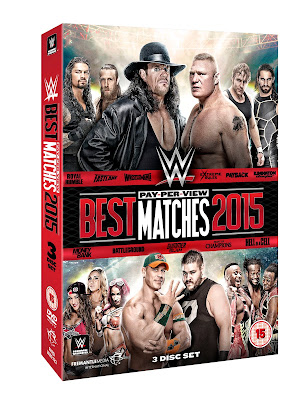 The set is presented by former NXT Tag Team Champion Corey Graves, who turns up about two or three times per disc, to act as seque and to break up the action. Once the chosen matches from each PPV are shown there's also a cool little highlights package for the PPV, with each taking on a slightly different feel. 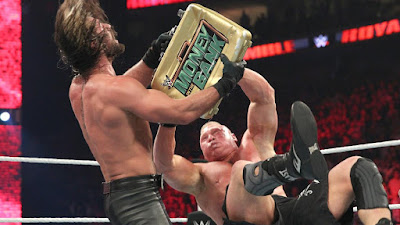 The set get's off to a great start as Brock Lesnar defends the WWE World Heavyweight Championship in a barn-burner of a Triple Threat against John Cena and Money in the Bank Contract Holder Seth Rollins. It's a match that the rest of the set will struggle to follow as the trio string together a series of spectacular spots and near falls that have the Philadelphia crowd hooked. The type of match that you will only see in WWE, it's put together with a real craft and the structure helps to drive the bout throughout. A physical thrill ride from start to finish, for me this is the best contest WWE put on in 2015, an absolute must-see. 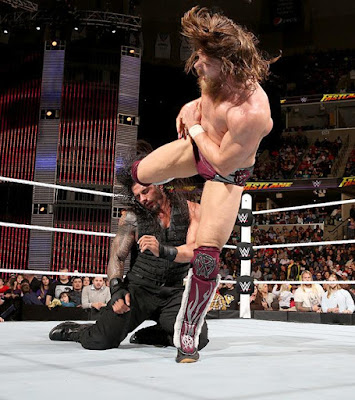 The good times continue as Daniel Bryan and Roman Reigns duke it out for a shot at the WWE World Heavyweight Championship in an aggressive contest. The viciousness that both men bring to this one makes it stand out, making the title look so important. There's a strike sequence towards the end that is pretty much perfect and should have been a star-making moment for Reigns. 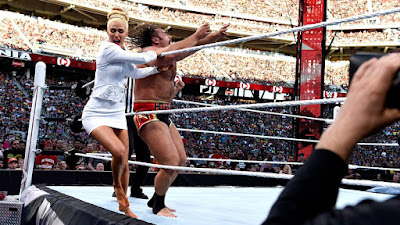 John Cena and Rusev's WWE United States Championship match isn't one of the matches I'd have chosen to represent WrestleMania, with the WWE Intercontinental Championship Ladder Match and Seth Rollins and Randy Orton's battle both being better matches. That being said, this one has plenty of WrestleMania pageantry surrounding it, and is still a good storytelling contest. Whilst some of the action isn't as crisp as it should have been, I still found that I enjoyed the match much more on a second viewing, so if you didn't enjoy the bout originally, I definitely recommend giving it another chance. 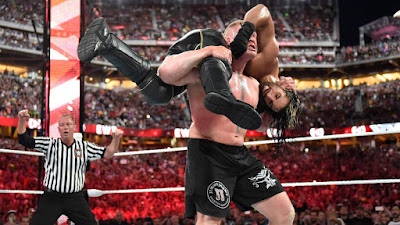 Roman Reigns continues to put on star performances in a terrifically physical bout with Brock Lesnar over the WWE World Heavyweight Championship. Despite a fairly hostile Santa Clara crowd, Reigns handles himself well and the crowd become less of a factor as the bout goes on, as Lesnar and Reigns' both put on quality performances in their respective roles. With a great finish that see's Money in the Bank contract holder Seth Rollins interjecting himself into the contest, providing one of the most memorable moments of 2015. Reigns' Last Man Standing match with The Big Show from Extreme Rules is overlooked in favour of Cesaro & Tyson Kidd defending the WWE Tag Team Championships against The New Day in pacy contest that manages to showcase both teams well. 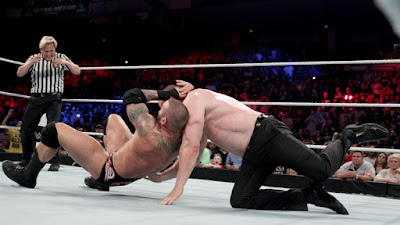 There's a lot of fun action on display in a Fatal Four-Way contest between Dean Ambrose, Seth Rollins, Randy Orton and Roman Reigns over the WWE World Heavyweight Championship. There's some quality interplay between the four characters that makes the match for me, with some especially good stuff between the three for Shield members, Ambrose, Rollins and Reigns. The added storyline with Kane's job as Director of Operations being on the line does end up holding the match back at various points, leading to surprisingly weak finish. 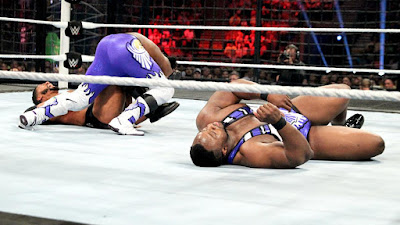 The first ever Tag Team Elimination Chamber is next, as The New Day defend the WWE Tag Team Championships against The Prime Time Players, Los Matadores, Cesaro & Tyson Kidd, The Ascension and The Lucha Dragons, in a spot-laden contest. Whilst the match is an entertaining watch, it's booking is questionable throughout, struggling to get a pace that suits the contest. The finish sequence has it's moments, but it bagginess ends up letting it down, I'd have preferred to have seen Dean Ambrose and Seth Rollins main event get this slot if I'm honest. 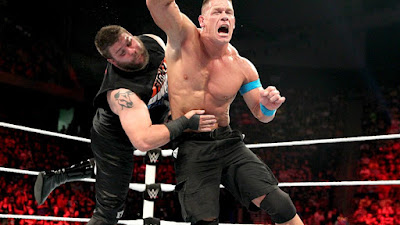 John Cena and Kevin Owens put on a tremendous Champion vs. Champion bout, that works brilliantly as an introduction to the then NXT Champion on the main stage. It's spot-based action, but with just enough narrative to keep things ticking, in front of hooked Corpus Christi audience. Driven by a passionate Owens and a frustrated Cena, there's some world class near falls here, kicking off one of the years strongest feuds in styles. 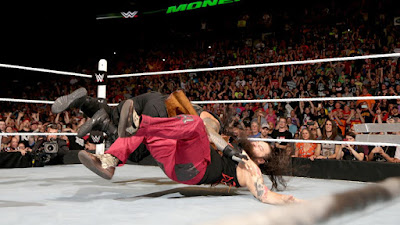 You can't really go wrong with a Money in the Bank Contract ladder match, and whilst this year's bout isn't a vintage outing, there's still plenty to enjoy. The seven man contest involving Randy Orton, Kane, Neville, Dolph Ziggler, Roman Reigns, Kofi Kingston and Sheamus, is much more focused on dramatic moments, than it's usual non-stop action style and thus the bout has a rather different feel to that of the majority of it's predecessors. It's definitely fun whilst it lasts, but doesn't feature anything particularly memorable, therefore I wouldn't have minded on bit if we'd had the second Kevin Owens vs. John Cena match in it's place. 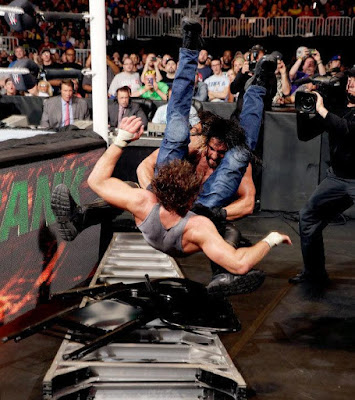 A completely different Ladder match next as Dean Ambrose goes after Seth Rollins WWE World Heavyweight Championship in a brutal contest. With much better spots and a compelling narrative that's told well throughout, Rollins and Ambrose take their feud to the next level. Dean Ambrose puts in a terrific performance fighting from underneath, cementing his place as one of the companies top babyfaces, whilst Rollins continues to be consistently good throughout his title reigns. It's unfortunately let down just a tad by poorly booked finish and it's length may not be for everyone, but it's still quality encounter that's well worth a watch. 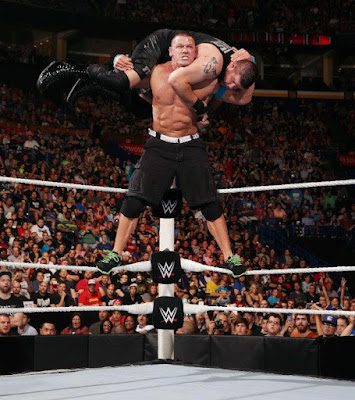 The first match that doesn't really belong on the set is a Triple Threat match between Brie Bella, Charlotte and Sasha Banks, that doesn't quite hit the spot. That isn't to say that it's a particularly bad match, and there is plenty of nice wrestling in there, but there's nothing here that makes it stand out from the pack, either Sheamus vs. Randy Orton or Roman Reigns vs. Bray Wyatt would've been better choices from this PPV. John Cena and Kevin Owens complete their trilogy with another outstanding bout over the WWE United States Championship. Whilst there's a number of similarities from the first two, this is still a great watch full of big spots and big near falls. The St. Louis crowd give the duo a great reaction throughout as they bring their feud to suitable crescendo. 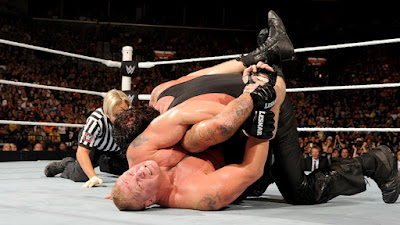 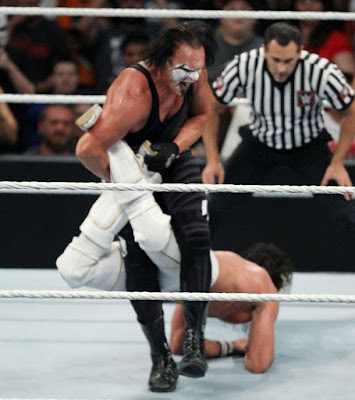 Charlotte challenging for the WWE Diva's Championship against Nikki Bella at Night of Champions was arguably the best women's outing on PPV in 2015 and rightly earns itself a slot on the DVD. There's some solid wrestling and a great narrative throughout that make this one stand out above the rest of the pack. Seth Rollins' WWE World Heavyweight Championship defense against Sting is a strange choice for the set, especially when compared to the match Rollins had minutes earlier with John Cena over the WWE United States Championship. While far from a "bad" match, an injury to Sting in the last portion of the bout leave the contest feeling more than a little flat come it's conclusion. 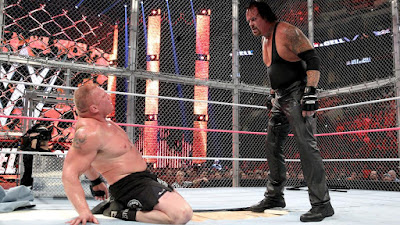 Strangely the set finishes off with the main event of October's Hell in a Cell PPV, ignoring the two PPV's that came in November and December, as The Undertaker and Brock Lesnar brought their close to a brutal conclusion inside the demonic structure. It's a bloody brawl of a contest, that manages to tell a superb story as two of the best go toe to toe. Personally, I think this one of the best Hell in a Cell matches for a very long time, with plenty of memorable moments and a terrific conclusion. The post-match antics with The Wyatt Family though probably didn't need to be included and leaves the set feeling a little incomplete at the end. 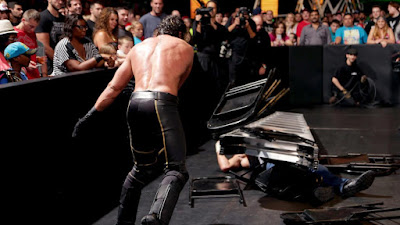 On match quality alone this is a brilliant DVD set, that despite having a couple of questionable inclusions manages to keep the good times rolling for pretty much the entire 8 hours plus running time. Three or four years ago, this would've been a much have set, but the WWE Network now makes it pretty easy to skip through all these matches and even make an improvement on the matches that are chosen for this one and even actually complete the year with the two PPV's from November and December.

I found this to be an enjoyable watch from start to finish, but it's difficult to recommend something that only has about ten minutes of content that isn't available at a cheaper price somewhere. However, if you've got a poor internet connection then this is the set for you, I suppose.