On 15th March 2016, TNA aired the 609th edition of Impact Wrestling live from Universal Studios in Orlando, Florida, USA on POP TV. Matt Hardy defended his TNA World Heavyweight Championship against Ethan Carter III and Jeff Hardy, before Drew Galloway cashed in his Feast or Fired Briefcase to win the title, whilst Jeff Hardy faced Eric Young earlier in the show to earn his place in the main event...but was it any good? Let's find out. 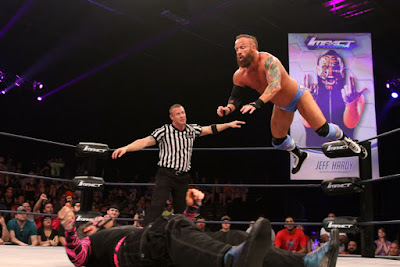 After Dixie Carter had interrupted the bout early on to reveal that the winner would advance to the evening's main event, there was an extra level intensity added to Jeff Hardy's return after being written off television due to his inability to travel to the UK for the January tour. There were a number of moments like this throughout the show, where it felt like TNA was attempting to make as much as they could out of the show being live for the first time since their POP TV debut at the start of 2016. The match was a decent opener, with Hardy looking strong on his return, whilst Eric Young put in another belting character based performance as he continues to grow in his crazy wild-man gimmick. Little moments like Young pulling on Hardy's neck with Hardy in a tree of woe position (of course, making reference to the Piledriver through a table that EY gave the Charismatic Enigma a few weeks back) made this an entertaining bout. There were areas that the pair could have explored to have made the match better, like Young focusing even more on Hardy's neck and some selling from Hardy would've been nice also. The finish saw the former WWE World Heavyweight Champion get the better of his rival hitting a Twist of Fate and a Swantom Bomb in a disappointingly basic finishing sequence. Still a watchable opener, with plenty to enjoy. 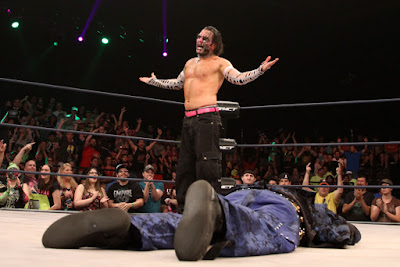 One of my major problems with TNA programming in 2016 has been how week's worth of booking seem to happen within the confines of a singles programme and we had another case of that here. With Jeff Hardy having gone over Eric Young and advanced to the main event of the show, we got a segment between Hardy and his TNA World Heavyweight Champion brother, Matt. Now, I actually thought this was a pretty strong segment, with some clearly defined characters. Matt and his wife Reby attempting to convince Jeff that he didn't need to be in the main event because they could have a one on one match at "Bound for Glory 2017, maybe even Bound for Glory 2018", whilst also handing their infant child Maxel over to Jeff was a great piece of television, building nicely toward Jeff refusing to go along with their plan. Of course, it closed with Matt attempting to take out Jeff only for the younger brother to come out on top, hitting a twist of fate to lay out the champ. I just wish this segment was happening next week and the match scheduled for the shows main event was the week after that, just to allow the story to breath and truly build the anticipation for it. 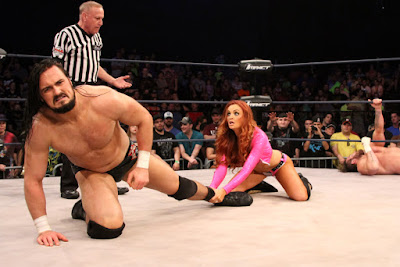 I've been getting a lot out of both Gail Kim's feud with Maria and Drew Galloway's rivalry with Mike Bennett, so I was pretty hyped to see the two stories combine in this mixed tag team bout. There was some top notch story telling throughout this one, in a bout that used the gender roles especially well. Maria's avoidance of Gail, including holding onto Galloway's leg to prevent him from tagging in his partner, having the heel be so afraid of the woman she's antagonised for the last few week's made the moment when Gail finally go her hands on her opponent all the more satisfying to see. On that note, the finish was perhaps my favourite moment of the contest, as with Bennett trying to help his wife, he ended up taking an Eat Defeat from Gail, followed by a Claymore Kick from Galloway, before Maria rolled Gail up and stole the victory for her team! There's more to come from both of these feuds and the finished gave Maria even more to talk about over the next few weeks. Gail vs. Maria is a rare case of TNA holding off on a bout, meaning that when it happens it'll mean more than it every could have been capable of without it. Great work from all involved here.

fast-forward...A recap of Lashley vs. Kurt Angle from Impact Wrestling #608 aired, followed by the aftermath that saw Lashley take out Angle, Eddie Edwards and Drew Galloway, before backing away from Ethan Carter III...

lashley snaps and attacks josh matthews and the pope 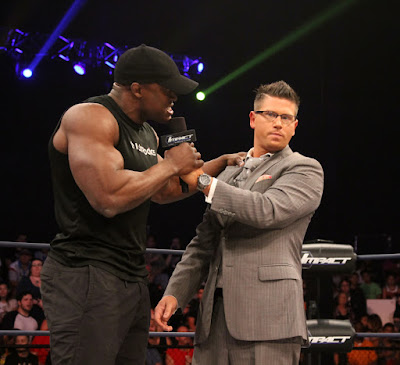 Despite him slapping hands with fans on the way down to the ring, this segment was all about cementing Lashley's heel turn from last week's episode. The former WWE United States Champion surprised me here, as he isn't known for being particularly strong on the microphone, but this was a solid performance that, at least in my memory, was one of, if not the best Lashley promos that I have ever seen. Claiming that he'd been over-looked for guys like Drew Galloway and Ethan Carter III, his biggest claim came when he said "I'm the toughest and most dominating wrestler in this entire wrestling business". A great heel line, that clearly references other names *cough* Brock Lesnar *cough* in other promotions and therefore makes it easier to hate the character. He then showed his power by taking out his interviewer, the dweeb master general himself, Josh Matthews and then laid out Matthew's co-commentator "The Pope" D'Angelo Dinero as well! A short feud with Dinero would give something for Lashley to do before moving into something with Ethan Carter III, and allow the character change time to settle in with the audience.

fast-forward...A freaky promo from The Decay revealed that Rosemary would be Abyss and Crazzy Steve's tag partner, as they answered the challenge laid out by Beer Money Inc. and Eddie Edwards from earlier in the show.... 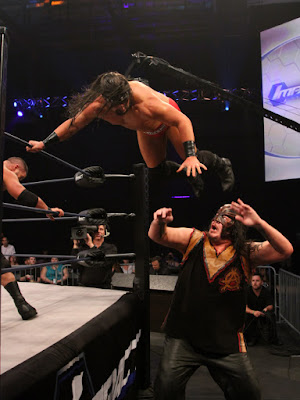 This was a weird one for me and never quite seemed to connect on the night. SHIMMER star Rosemary being involved in her first match for TNA could have been something that drove the match and made a real statement for the company on their position in-terms of inter-gender matches, taking a popular trope from Lucha Underground. Unfortunately, her involved was minimal, limited to spraying some her mist and Beer Money getting way too excited to hit their Beer Money Suplex on her (which didn't actually happen). James Storm appearing to injure himself on slingshot crossbody onto Abyss on the outside (and loudly saying "Fuck...fuck") was a worry for a tag division that has already suffered a big blow with Eddie Edwards partner in The Wolves, Davey Richards suffering an injury on last week's episode. The Decay managing to pick up a sneaky win was the right decision for the tag division which is need of some powerful heels to combat popular duos Beer Money and The Wolves and their victory was the main positive I took away from a bout that didn't do much for me at all.

fast-forward...Matt Hardy and Reby Sky attempted to get Dixie Carter to cancel the evening's main event, and when TNA's President refused, Hardy threatened to simply get himself disqualified, leading to the match being made no disqualification (erm...like every three way bout then, yeah?)... 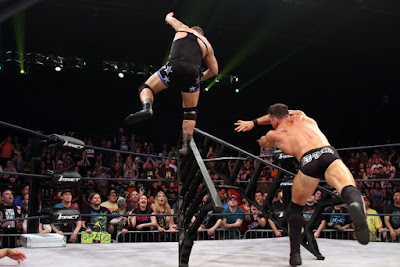 In another example of rushed booking, the show featured an impromtu, unannounced ladder match, as Billy Corgan, Smashing Pumpkins, made the bout after reviewing evidence that Eli Drake had swapped his Feast or Fired briefcase with ICW star Grado's, resulting in the later being fired from the company. This match was so so much better than I was expecting it to be, continuing a feud that has given TNA's undercard some much needed energy over the last month and a half. Lots of nice spots throughout, like Grado jumping from the ladder to the top rope before diving to outside onto Drake (as well as Jessie Godderz and Mahabli Shera) and the current PBW Tag Team Champion hitting Drake with an electric chair drop of the ladder, the pair made good use of the gimmick. Lots of drama with Godderz and Shera helping out their respective friends, the contest built nicely to the moment when Grado retrieved the contract after knocking Drake off the top with a Bionic Elbow. With the Scotsman now back on the roster, it will be interesting to see how TNA use him through the rest of the Spring. 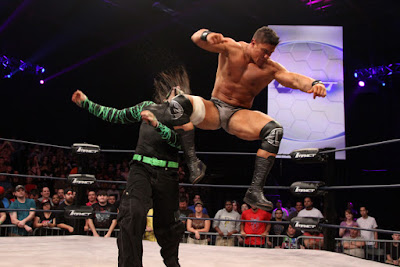 If you were a fan of run-ins and overbooking then this was the main event for you! Eric Young and Bram took out Jeff Hardy (after Hardy seemed to have the match won with a Swantom Bomb) with Young furthering their feud by hitting a Piledriver onto the exposed floor at ringside, Tyrus and Rockstar Spud attacked Ethan Carter III, only for EC3 to fight the pair off, before Mike Bennett finally got the job done with a steel chair, before the pair brawled away from the ring. For a match that showed early promise by playing off the various inter-connecting relationships and previous storylines between all three of the men involved in the contest, it was a shame to see things devolve into the madness that came. For me, no one came out of this looking great as TNA attempted to protect everyone. It felt like they'd booked the World Heavyweight Championship match because they had a live edition of Impact Wrestling, but hadn't really thought through what they wanted it to do. 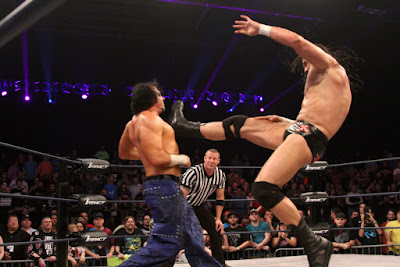 About thirty seconds after I'd questioned why Drew Galloway wasn't involved in the action, his music hit and things got serious. Yes, just as Matt Hardy was about to head to the back with his match ending in chaos, Galloway was out to end the show on a high point. Whilst this moment felt a little bit "We're live for the first time in ages, so we might as well have Galloway cash in his briefcase", it got a cool reaction from Universal Studios and shifted a talented performer into a position he's deserved for sometime. I do feel like Matt Hardy's World Heavyweight Championship reign had, at least, two months worth of legs left. Maybe if Galloway had cashed in at that time then this moment would have been all the more satisfying to watch as a fan. 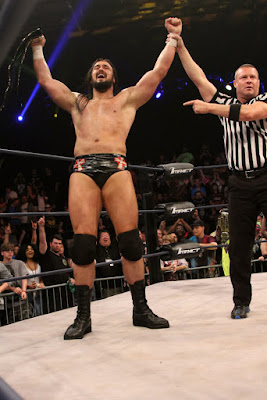 After five week's of episode's from England, TNA's return to the USA managed to keep up the strong form that that run of taping's managed to produce! Whilst, I've still got a problem with the pacing of certain storylines, the show produced memorable moments, like Drew Galloway winning his first TNA World Heayvweight Championship in the closing moments of the show, and was entertaining throughout it's two hour duration. An opening match between Eric Young and Jeff Hardy, a mixed tag match with Galloway, Gail Kim, Mike Bennett and Maria and a Ladder match between Grado and Eli Drake all provided some credible television action, with a lot of variety between the bout. Whilst the main event three way didn't quite hit the spot for me, there was more than enough to enjoy here.

Heading into new week, we have a new a World Heavyweight Champion, with strong heel challengers being built with Mike Bennett, Lashley and even The Decay looking great on the show, whilst Matt Hardy will obviously receive his championship rematch. Let's hope TNA can make the most of this and continue to build on the foundation that has been built over the first three months of 2016!