On the 9th March 2016, WWE aired the 187th episode of NXT, taped on the 27th February 2016 at Full Sail University, Winter Park, Florida, USA on the WWE Network. Sami Zayn and Samoa Joe did battle in a Two Out of Three Falls match to determine the Number One Contender to Finn Balor's WWE NXT Championship...but was it any good? Let's find out! 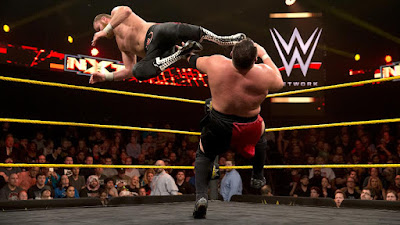 Wowza, where to start with a match that took up the entire show? Well, I suppose the beginning would be as good a place as any, right? Yeah, the beginning. Sami Zayn and Samoa Joe opened things up with some slick wrestling, trading holds flawlessly and running through some nice sequences. If the fact that match was starting the show wasn't a sign that we were in for a long one, then the deliberate pace certainly was. That isn't to say that the opening was slow or boring, it was anything but and Full Sail University was seemingly hooked on everything the two had to offer. The first ten minutes or so did feel like Joe and Zayn were teasing us just a little, showing glimpses of what was to come, whilst keeping things fairly low key. For a longer match, I like this style a lot, it makes you want to stick around to see more. 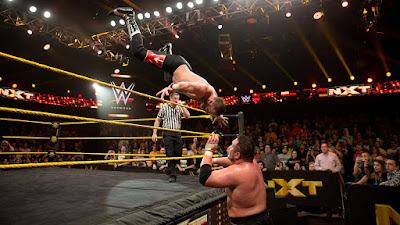 The idea that we had to wait until over twenty minutes to see the first fall was pleasing, as on occasion WWE has been known to squeeze three falls into the time of a regular bout. If this had been a one fall bout, I think I would have been pretty happy with Joe getting a pinfall victory following a Muscle Buster. I got a kick out of Joe using his size to dominate the first half of the match, it built a solid foundation for a story that would continue to grow throughout the contest and the call-back to the finish of their previous Number One Contender bout from NXT #184 also raised a smile. The sequence of action that saw Joe get the initial pinfall was done very well, as just as Zayn seemed to be about to hit his biggest move of the match, his wrist-lock transitioned into a springboard Tornado DDT, Joe was able to dodge pulling Zayn into his STJoe and hitting the Muscle Buster for the pinfall. So far, so good. 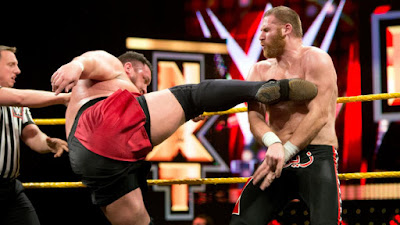 The build towards Zayn leveling the score was another case of two performers knowing exactly when to raise the pace and when to let things settle. Joe attempting to get a countout victory on numerous occasions was cool, as it effectively allowed both competitors to rest, whilst keeping the crowd and television audience engaged. The thing that allowed me to stay involved was Zayn's stellar selling, it could easily have ended up a bit of a predictable mess, but Zayn told the story with his body and face which  alongside the frustration from Joe that he couldn't secure the victory made for compelling television. A flurry of offence from the former NXT Champion, not only lifted the pace and got the crowd bouncing, but logically allowed Zayn to pull back a fall as Joe tapped out to the Koji Clutch. 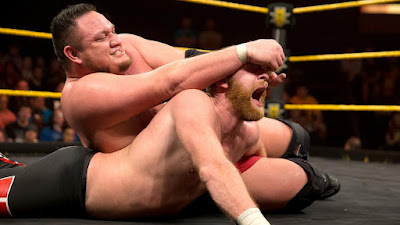 By the time Samoa Joe's hand had hit the mat in submission, we were over 32 minutes into the match, and I was still hooked by the story the two guys were telling in the ring. Full Sail University seemed to be feeling the same, and the match was about to step up a gear. Zayn's near falls upped the ante as he came close with a Blue Thunder Bomb and a Sunset Bomb, whilst a brilliant submission sequence from Joe as a reversal to Zayn's attempted Helluva Kick piled on the drama. The multiple submissions that Joe seamlessly transitioned through, allowed Zayn to get close to the ropes, before Joe would pull back another limb appear to have the match won on a handful of occasions throughout, only for Zayn to continue to find a way to stay in the match! 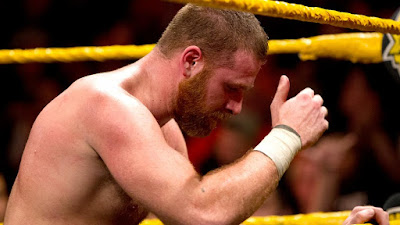 The bout built to it's crescendo as Zayn seemed to have one last burst of energy and with the crowd behind him, look to have the match in his sights as he set up for a Helluva Kick. After seeing Joe dodge the move earlier in the match, it felt like he was destined to hit it this time and roll on to Takeover:Dallas. But there was one last twist in the tale, as Joe ducked the kick and locked in Koquina Clutch to win the match in an astonishing 43 minutes. If you can't tell already I absolutely loved this match, it's almost certainly the best TV show match that's aired so far this year and will be very hard to beat. Two guys who understand their characters and built a fantastic story that filled pretty much an entire hour of TV time. Zayn continuing to stay in the match as the fiery babyface, and never managing to hit his Helluva Kick managed to keep him protected for any future big matches at Takeover: Dallas, as well as his new main roster feud with Kevin Owens, whilst Samoa Joe looked like an absolute beast throughout and garnered plenty of heat and still got a clean victory! 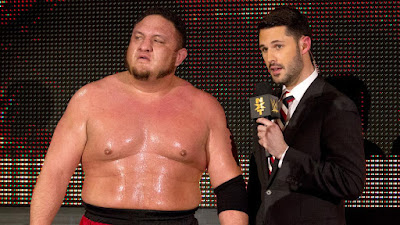 Ruddy hell, that was a bit good, wasn't it? Not seen it yet? Go and watch it now on the WWE Network. For me, this bout trumps the 2/3 Falls bout that Zayn had with Antonio Cesaro back on NXT #61, for having richer storytelling and that extra layer of drama that makes it stand out. Can I really say anything more about this show? It jumps right to the top of our ATPW Scale leaderboard. You can't really argue with that either, considering the show had one match and that one match was fucking awesome!
Posted by QTPW at 15:45