On 16th March 2016 , WWE aired the 188th edition of NXT on the WWE Network, having been taped at Full Sail University in Winter Park, Florida, USA on 27th January 2016. With 16 days until Takeover: Dallas, the show featured Asuka teaming with WWE NXT Women's Champion Bayley to take on Eva Marie and Nia Jax...but was it any good? Let's find out! 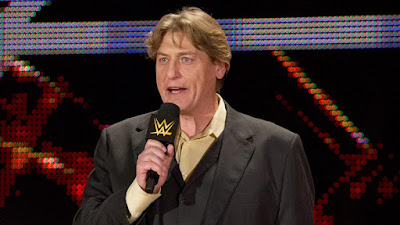 Sami Zayn kicked off this week's show with a solid promo putting over his match from last week with Samoa Joe as a war. The promo worked nicely as a way of allowing Zayn to gain a little bit of momentum, despite losing last week's match, it's a skill that could serve him well on the main roster. NXT General Manager William Regal coming out to interrupt Zayn was a cool moment, but was topped when 3 time IWGP Heavyweight Champion Shinsuke Nakamura appeared on screen and was revealed as Zayn's opponent in 16 days at Takeover: Dallas. Seeing Nakamura finally make his debut on WWE television was a special moment for sure, that bolstered an already strong looking card in Dallas. 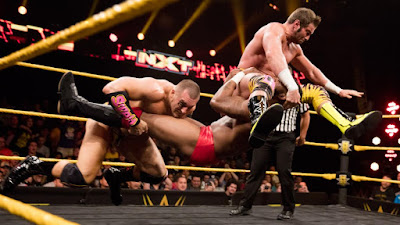 I've made it pretty clear over the last few months that I am not a fan of Mojo Rawley and Zack Ryder's Hype Bros team, and this match did little to change my mind. This was a fairly straight-forward squash for Rawley & Ryder, as they dominated Angelo Dawkins and Kenneth Crawford for just over 3 minutes. What did surprise me was just how over the Hype Bros are with the Full Sail University crowd, like at least 65% of them were shouting along with all their cheesy as fuck catch phrases. I guess these lads just aren't for me and there's really little that they can do to change my stance on them, because no matter how go the matches they have they'll always have those annoying gimmicks.

fast-forward...A look at NXT's at the Arnold Classic in Cleveland, Ohio on 5th & 6th March, as well as NXT live events in Columbus & Cleveland, Ohio on 3rd & 4th March...Emma and Dana Brooke bumped into Deanno Purrazo backstage, with Deanno seemingly holding back a laugh throughout the entire segment... 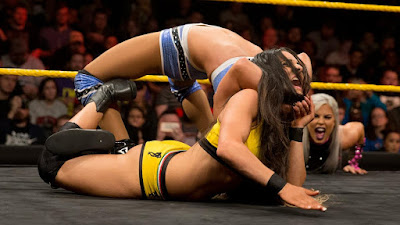 Emma picked up her second win a row as she made quick work of Deanno Purazzo. Similar to the previous bout, this was pretty much all Emma as she ran through a number of her signature moves before locking in the Emma Lock to pick the submission victory. Not much to really get excited about here, but it was nice to Emma presented so strongly throughout the bout, as she is someone for me who doesn't get enough screen time on the show. It would appear that Emma's recent run of victories has been to set up her up for a rematch with Asuka on NXT #189 as was announced later in this show.

fast-forward...Tommaso Ciampa continued his recent undefeated streak by destroying Jesse Sorenson and winning by submission in just over two minutes... 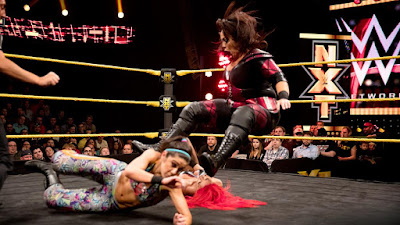 Whilst this match didn't quite stand up against the NXT #185 tag match that had Carmella in the place of Asuka, it was clear that this bout had a much different aim. That aim was to continue to build towards an WWE NXT Women's Championship match at Takeover: Dallas between Bayley and Asuka, with the bout being announced by NXT General Manager William Regal after this bout had finished. Both Bayley and Asuka looked dominant in their four minute win, with the pair clearly being given the spotlight for the majority of the contest. The finish was the strongest part of the match for me, as Nia Jax ended up nailing Eva Marie with a leg drop in attempt to save her from a pinfall, before Asuka nailed Eva with a kick from the apron and Bayley got the pin with a Bayley to Belly. It will interesting to see where NXT takes both Asuka and Bayley over the next two episodes before we get the highly anticipated clash at Takeover: Dallas. 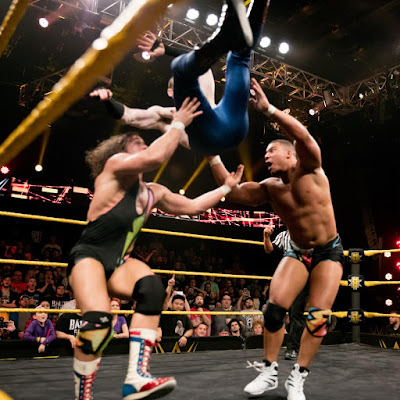 The final match on the show was a pacy tag team encounter between American Alpha and The Vaudevillains to decide who would face The Revival at Takeover: Dallas. Jason Jordan and Chad Gable looked fantastic as they claimed their victory, but the bout was still a competitive and entertaining watch. Fairly basic in it's structure, all four competitors managed to fill the bout with moments of excitement that went beyond the simple set-up. Jason Jordan's excellent comeback sequence, a superbly executed high-angle German Suplex from Gable taken with skill by Aiden English, a brilliant near-fall from a Sitout Powerbomb from English, before American Alpha took the win with their Grand Amplitude finish, all made this contest stand-out on the show. With American Alpha now scheduled to face The Revival at Takeover: Dallas they have the biggest stage to show off their act and I expect them to take full advantage of it. 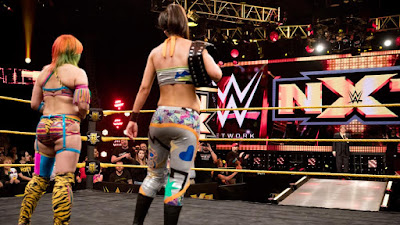 Obviously this episode was always going to struggle in comparison to last week's epic, however it was used to firm up the card for Takeover: Dallas in just 16 days time. For me, the opening segment was the strongest part of the show with Sami Zayn expertly shuffling past his loss to Samoa Joe before being thrown into a bout with Shinsuke Nakamura in 16 days. Bayley and Asuka's main event tag bout didn't offer anything special, but the prospect of the two tangling over the WWE NXT Women's Championship in Dallas is just that, special. American Alpha and The Vaudevillains offered the best action of the show in the final match, whilst Emma's squash victory did a lot more for me than The Hype Bros' counterpart.
Posted by QTPW at 19:13