WWE Royal Rumble 2016 is out on DVD and Blu-Ray now in the UK. You can order here at WWEDVD.co.uk and all other reputable Home Video stockists. Broadcast live on PPV (and on the WWE Network) from the Amway Center in Orlando, Florida, USA on 24th January 2016. The show features Roman Reigns defending the WWE World Heavyweight Championship against 29 other men including Chris Jericho, AJ Styles, Kevin Owens, Sami Zayn and Dean Ambrose in the main event Royal Rumble match. The DVD edition includes five other matches featuring the likes of Kevin Owens, Becky Lynch, Dean Ambrose and Charlotte in prominent bouts. Commentary on the disc is provided by John "Bradshaw" Layfield, Michael Cole and Bryon Saxton. 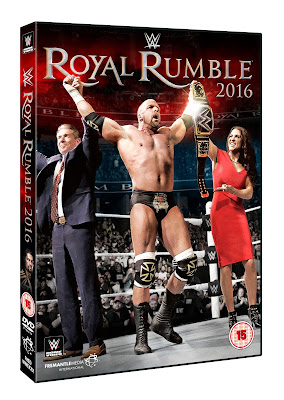 Match 5 – Royal Rumble for WWE World Heavyweight Championship
Roman Reigns © vs. Rusev vs. AJ Styles vs. Tyler Breeze vs. Curtis Axel vs. Chris Jericho vs. Kane vs. Goldust vs. Ryback vs. Kofi Kingston vs. Titus O'Neil vs. Luke Harper vs. Stardust vs. The Big Show vs. Neville vs. Braun Strowman vs. Kevin Owens vs. Sami Zayn vs. Erick Rowan vs. Brock Lesnar vs. Jack Swagger vs. The Miz vs. Alberto Del Rio vs. Bray Wyatt vs. Dolph Ziggler vs. Sheamus vs. Triple H 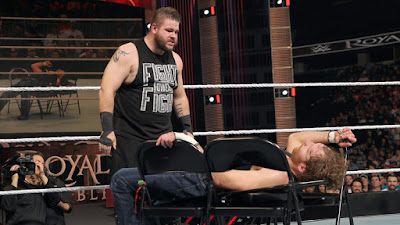 Royal Rumble 2016 begins with a brilliant Last Man Standing match between Dean Ambrose and Kevin Owens over the WWE Intercontinental Championship. Both men put in strong performances in a spot-based encounter that builds and builds towards it's finish. Following this there's a good tag team match with The New Day's Kofi Kingston and Big E opposite The Usos, that is highlighted by a pacy spot sequence in the final third of the match. The main problem the bout has is that the crowd is ready for a New Day babyface turn and possibly a reverse for their opponents. 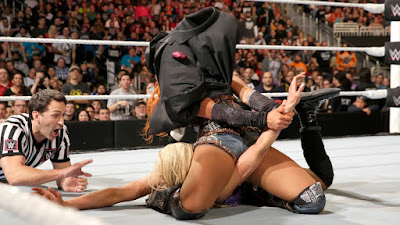 The WWE United States Championship match between Alberto Del Rio and Kalisto is let down by a couple of missed spots and a particularly sloppy finish. However, for the most part the pair work quite well together in the ring and the match has a handful of believable near falls. Becky Lynch's challenge for Charlotte's WWE Diva's Championship features some top class wrestling between the pair who work hard for each other throughout the match. Ric Flair's actions on the outside of the ring, including his involvement in a fairly flat finish stop the match from becoming as good as it should have been, but the surprise following the match makes up for this. 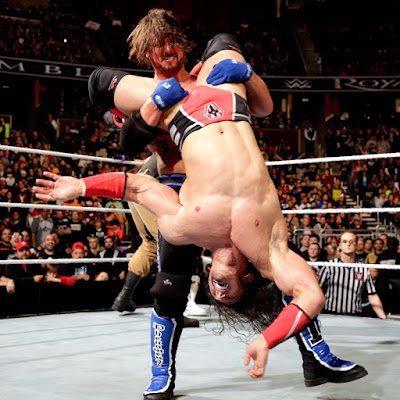 Of course, The Royal Rumble match takes up a large section of the show, going for over an hour, but it's structured well-enough that the match rarely feels like a drag. The opening ten minutes or so in particular are a great watch, with the debut of AJ Styles' getting a massive reaction from the Amway Center. Roman Reigns' trying to hold onto his WWE World Heavyweight Championship is obviously the major storyline throughout the bout, and the story takes a number of obvious turns throughout the match, disappointingly showing a real lack of creativity and imagination. 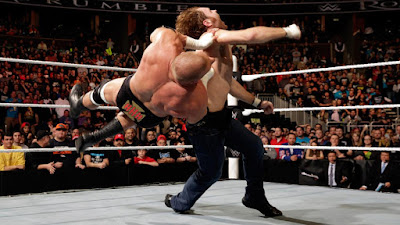 However, there are various points in the match that feature clever pieces of booking, showing a knowledge of the audience and managing to keep the crowd involved in the action and push heat into the correct places. A personal highlight, that I suppose wouldn't be for everybody, is R-Truth's mid-match comedy spot, that still managed to get a little chuckle out of me on the second viewing. The matches other main thread is the action involving The Wyatt Family and Brock Lesnar, which again felt like a little bit of miscue in terms of the booking, with the action never quite seeming as good as it could have been. Luckily, however, the matches closing straight is a thrilling couple of minutes, that have the crowd hooked, allowing the match and the show to end on a high point. 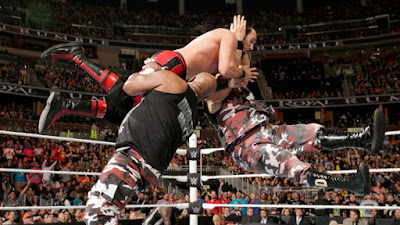 The only added extra on the disc is a Fatal-Four Way tag bout involving The Dudley Boyz, The Ascension, Damien Sandow & Darren Young and Mark Henry & Jack Swagger attempting to earn spots in the Royal Rumble match in a surprisingly fun outing, that is unfortunately let down by a lack of clarity in it's sloppy finishing sequence.

Not without it's problems, the first big show of 2016 is a stellar watch from start to finish. Each match has a reason to check it out, with the opening Last Man Standing match and the Royal Rumble bout standing out as the two strongest matches on the show. If you're looking to add to your PPV collection, then the Royal Rumble 2016 get's my recommendation, for sure.