It was the night after Money in the Bank, WWE had a brand new World Heavyweight Champion in the shape of Dean Ambrose, AJ Styles had something to prove after his controversial victory over John Cena and the Money in the Bank ladder match competitors were all looking to get back in the hunt...with the WWE Draft looming just over 4 weeks away, what direction would WWE take in the first Monday Night RAW of the Summer...and would it be any good? Let's start with the big stuff, eh? 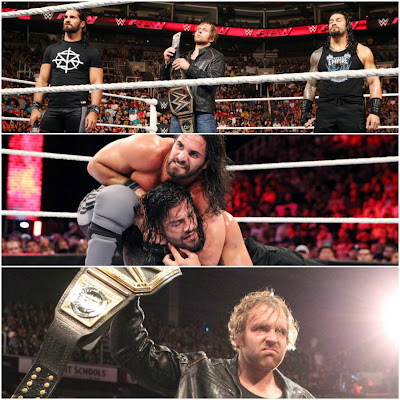 Book-ending the show, we had the fallout of Dean Ambrose's Money in the Bank briefcase cash-in on Seth Rollins, who had himself taken the title from Roman Reigns, on the PPV the night before. The opening segment saw both Reigns and Rollins interrupt Ambrose's address to stake claim to being Ambrose's first title defense opponent. I thought all three men put in top quality performances on the microphone with Ambrose's promo style being completely different from anyone else on the programme, making him standout as the champion even more. Reigns interaction with the crowd seemed was particularly interesting as he told them to "Shut up", I suppose with Ambrose now holding the title we'll get to see Reigns push the heel side of his character even more. Rollins, of course, was his usual self, owning every second he was on screen with a passionate promo against both Reigns and Ambrose.

Shane McMahon booked Reigns vs. Rollins are the main event with the opportunity to face Ambrose on 24th July at Battleground in Washington, D.C.. The match was pretty much a compressed version of the pairs match on PPV the night before, being quick to move into a back and forth format, with both men getting some strong near falls. It lacked the detailed start that had been used for the PPV bout, but with the crowd being much more mixed in Phoenix, it perhaps didn't need to work so hard. It wasn't the best match that the pair could have done, but still saw the work hard and produce a solid television main event.

The finish was a fairly obvious one, as both men ended up getting counted out after brawling around ringside. There was a nice element where Rollins managed to get back in the ring, only for Reigns to pull him back and therefore meaning the referee had to restart his count, that added a little extra drama to the rather basic finish. Shane McMahon would come out, but in a cute little twist Ambrose revealed that he'd face both men at Battleground. To be honest, I'm pretty sure everyone was expecting them to go for the Shield triple threat and it really could've been booked at the beginning of the show and allowed something a bit fresher to take place here. Unless Reigns and Rollins were going to have a match at least on the level of their PPV encounter, then I personally would've just booked the three way at the start of the show. 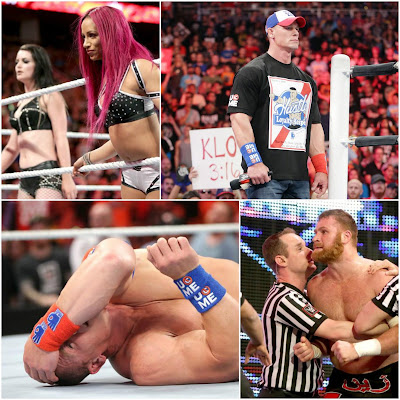 In the semi-main slot, we had the continuation of John Cena and The Club's rivalry. The talking part of the segment was top class, with AJ Styles opening things by asking Luke Gallows and Karl Anderson to apologise to him for interfering in his match the night before. The segment had a rather different tone, that I'm finding hard to describe. Styles looked like a dick, so did Gallows and Anderson, because they all looked like they playing out somekind of inside joke. This continued when Styles called out Cena so that Gallows & Anderson could apologise to him. This lead to a brilliant exchange between Cena and Styles, with The Cenation Leader coming out all guns blazing, claiming that Styles was "not as good as you think you are". Styles would fire back some bombs of his own, with both men showing a real passion and drive, with a real feel of the two having an issue with each other.

Styles offering Cena a match with any member of The Club, only to back out of a potential rematch, was another nice touch, it managed to add another level to feud and build more anticipation for a potential rematch. Cena's match with Karl Anderson was then perhaps disappointingly short, as any followers of Anderson's work in NJPW or ROH would surely know that Anderson would be more than capable of having a brilliant television bout with Cena, if given the chance. However, in terms of advancing the storyline, the Club running into the bout as soon as Cena hit an Attitude Adjustment, destroying Cena with a Magic Killer and a Styles Clash, was probably much more beneficial heading in a Styles vs. Cena rematch. Personally, I'd like to see Anderson and Gallows presented a bit stronger than they currently are, as they are coming across as Styles' lackeys, which might mean that we don't get to see them reach their full potential in WWE.

Rounding off the top portion of the card, we had Paige challenging unsuccessfully for Charlotte's WWE Women's Championship. This was a much more satisfying match than they had on last week's show and arguably a better match than the Women's tag bout that was chosen for PPV the night earlier. There was a lovely thread through the bout with Paige getting numerous near falls, which all got strong reactions from the Phoenix crowd, thanks to Paige being seen as something of an underdog. The finish built up the relationship between Charlotte and Dana Brooke, as it was Brooke's involvement that would allow Charlotte to hit Natural Selection and secure the victory. Having been kept away from the Women's title picture since WrestleMania, it was great to see Sasha Banks return to the top table after the match, with a feud between Charlotte and Sasha having the potential to reignite the division, if handled properly.

Coming out of multi-man bouts at Extreme Rules and Money in the Bank, we saw a focus returned to Sami Zayn and Kevin Owens feud, with the pair facing off in the opening match. A fun, well-paced clash here, with both men bringing plenty of intensity to a fairly short bout, by their standards. It could have been easy for the duo to sit back here, after a brutal Money in the Bank ladder match the night before, but it felt like both men wanted to give as much as they could within the time constraints, as they both pulled out big moves, including a lovely half and half suplex from Zayn as part of the best sequence of action of the match. Zayn picking up his first victory over Owens in WWE (and only his 2nd ever) was needed to drive the storyline, with the flash manner of the win bringing a little bit extra to any future rematch. The pull apart brawl has been a little overdone recently, so I wasn't too into the stuff the duo did after the match. 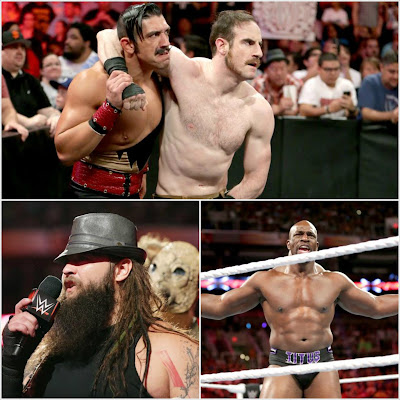 A short straight-forward tag match between Enzo and Cass and The Vaudevillains would settle their feud this week, with Enzo and Cass coming out victorious in a matter of minutes. It was very short and almost felt like an enhancement match, rather than a feud ender, as Enzo had a short face-in-peril stint, before making the hot tag and Cass cleaning house before picking up the victory. Nothing wrong here, but I would have liked to have seen a bit more emphasis on this match. Enzo and Cass looked great, but it was a real shame to see a strong and over team like the Vaudevillains end up getting pushed aside very quickly.

The return of the Wyatt Family was heavily hyped on the RAW Pre-Show, and after a couple of teasers throughout the main show, we'd eventually get to here Bray Wyatt cut a fairly solid promo. Things would take a turn however when the group were interrupted by The New Day. At first I got pretty excited about the prospect of a feud between the two groups, but then I began to worry if their two very different styles would be able to connect. In the ring, there's potential to have a fun match in a six man (even more so if Luke Harper get's back in the mix) but the promos could end up being too much of a good thing. Unless Wyatt can come up with an answer for The New Day's comical style, we may see something similar to his feud with John Cena a few years ago, where part of the mystique and uniqueness of the Family is taken away.

Following on from their average match at Money in the Bank, Titus O'Neil and Rusev were scheduled to have a rematch on the show. What we got however was finally a glimpse at what O'Neil is capable of when he dips into his mean streak and really has a reason to go after someone. After a disappointing promo on the Pre-Show, I thought O'Neil really stepped up his game here, with a powerful interview with Renee Young, followed up by beating the snot into the United States Champion. I'm hoping we get to see these two really begin to tap into this side of their game, as I think if they're given a reason for the characters to hate each other, it might bring out a much better match than we saw on Sunday.


A slightly improved effort on last week's show, with two strong talking segments being the highlight. The three way Shield opener had a lot of intrigue heading in and managed to live up to it's billing, whilst the three quality performances were joined by AJ Styles and John Cena's efforts later in the show. The match quality on the show wasn't great, but there was nothing that was anywhere near being a bad match. Sami Zayn and Kevin Owens probably had the match of the night, as Rollins and Reigns' main event felt more like treading water and filling time until the triple threat could be announced for Battleground.
Posted by QTPW at 01:28