After last week's NXT saw Shinsuke Nakamura and Finn Balor's interaction carry the episode, would the first NXT of the Summer '16 be able to show signs of improvement? Let's take a look, eh? 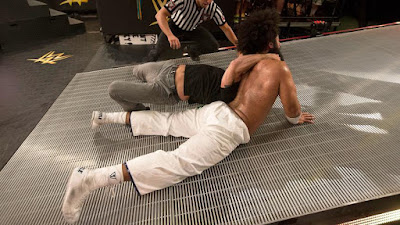 The major segment this week was the beginning of a feud between Austin Aries and No Way Jose. After Jose remained undefeated by picking up a comfortable victory over the debuting Josh Woods, things would begin to get interesting with Aries coming out to have a word or two. The segment would quickly become a bait and switch situation with Aries initially claiming that Jose had reminded him that wrestling was about fun, only to later attack him on the announce the table. Aries' funky dance moves bought joy to my heart in a way that Jose has yet been able to manage. The attack produce a great visual of Aries nailing Jose with a roaring elbow on the announce table, even better was the Last Chancery on the entrance way. There's a chance for Jose to learn a lot from a feud with Aries, which is surely one of the main draws of having the former ROH World Champion on the roster, hopefully this will translate into some enjoyable moments and matches on television also.

Another undefeated streak continued this week as Shinsuke Nakamura went over the now solo, Buddy Murphy in a underwhelming closing match. Obviously, anytime Nakamura is in the ring it's a treat as he's just so fascinating to watch, because he kicks the shit out of people and does kooky shit with his arms. Despite this however, as the final item on the show there just wasn't enough substance to this to feel completely satisfied. As opponent Murphy was a technicality sound hand, but with less than no momentum after being no wins on TV since August and having lost his only televised singles match to Tye Dillinger two weeks ago. This match would have been better suited to a position earlier in the show, even considering the star power that Nakamura brings. With a big match with Finn Balor confirmed for three weeks time, I can see the logic behind giving Nakamura a dominant victory, but a win over Murphy really means nothing at all at the present time.

The strongest match of the show came in the form of the aforementioned Dillinger clashing with Oney Lorcan (last seen as Christopher Girard in February).The match featured a cracking near fall though, with Lorcan hitting a series of european uppercuts in the corner, only to run straight into a superkick from "The Perfect Ten" getting a good reaction from the crowd for both the kick and the kick out. Following two losses on the bounce to Andrade Almas, there was some pleasing storyline advancement as Dillinger looked more aggressive and brought a more physical side to his game. The finish would also develop some new ideas for the former OVW Television Champion as he hesistated when starting to deliver the ten punches in the corner spot, allowing Lorcan to hit a leaping neckbreaker (similar in look to that of a blockbuster) and pick up an upset victory.

After just over a month off in-ring competition, Bayley was back in action this week in another simple squash victory, as pinned Deonna Purazzo following a Bayley-to-Belly. The former NXT Women's Champions style is particularly suited to this kind of match, but it was still a technicality sound as Purazzo proves to be a good hand in her enhancement role. It was a little disappointing to not see Bayley's "injury" that had supposedly stopped her from competing for the last month (although obviously live events are different) not played up here, either in Purazzo using the knee as her focus or even Bayley selling the injury. The extra touch would have made things much more interesting to watch here.

Whilst last week's NXT manage to keep it's head above water thanks to a brilliant segment involving Finn Balor and Shinsuke Nakamura, this week's show didn't have anything anywhere that level. Tye Dillinger and Oney Lorcan had the best match of the show, but even that physical encounter was a little on the short side and featured a couple of slip ups. Austin Aries feuding with No Way Jose could do wonders for Jose, but the first signs of it still leave me feeling skeptical about his potential. Then the final bout on the show might as well have been Shinsuke Nakamura wrestling a crash test dummy (no offence meant to Buddy Murphy in terms of wrestling ability, but he had the opposite of momentum before this episode).

If this is supposed to be the beginning to the next era in NXT's history, it's going to need to try harder than this.
Posted by QTPW at 22:51