After having a break for a fortnight due to real life taking over (damn this real life nonsense!) we are back and what a weekend we have coming up. Or to be more precise what a Sunday we have this weekend in British Wrestling. Anyway enough of this intro talking, let's get Ready For The Weekend! 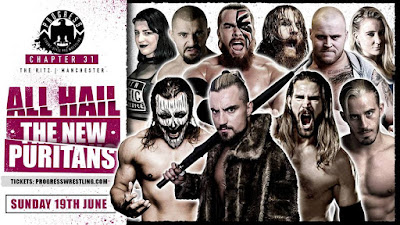 First up on Sunday and an PROGRESS Wrestling are back up north against at The Ritz in Manchester for Chapter 31: All Hail The New Puritans.

After Chapter 30:  Super Strong Style 16 was over, Chris Hero sent out a challenge to 'The Villain' Marty Scurll for this Sunday. After hearing what Scurll had said about him on commentary and that he didn't rate him as a top wrestler, Hero countered that with why is he a villain other than him calling himself one. Therefore, Hero has challenged Scurll to a match this Sunday for the PROGRESS Championship to show him why he should rate him as one of the best.

Over a year ago, Damon Moser was a part of The Origin, however they quickly threw him out of the group before Dave Mastiff and Zack Gibson joined the ranks. If they thought that would be the last of Moser then they recently found out that is not the case. Moser has now decided it is the right time to gain some revenge on his former Origin team-mates and Gibson is the first on his list. Moser may have the fans behind him but Gibson does not come alone and will have Nathan Cruz in his corner in Manchester. While Gibson will look to stop Moser's retribution dead in it's tracks, Moser shall be looking to use Gibson to send a message straight to The Origin.

This Sunday will see the climax of one of PROGRESS's longest running feuds in recent history when Pollyanna faces Dahlia Black. These two women have had matches for months. Black then involved her other half, TK Cooper into the mix to steal wins from Pollyanna. To counter this PROGRESS management firstly had "Flash" Morgan Webster team with Pollyanna to face The south Pacific Power Couple. Then Jack Sexsmith was the special referee in a match between the two yet still Cooper got involved. So now PROGRESS have scheduled one more match for this Sunday with the stipulation that if anyone interferes in the match then both Pollyanna and Black shall be fired from PROGRESS . This feud will end this Sunday in Manchester one way or another with no exceptions.

Also this Sunday, Absolute Wrestling will hold it's second show at NE6 Suite in Newcastle with The Championship Suspect.

The event shall see the continuation of the Absolute Wrestling Championship tournament with two quarter final matches taking place. After "Flash" Morgan Webster was forced to withdraw from the tournament due to injury, Tyler Bate was announced to take his place and he'll be in action this Sunday when he faces 'The Gimmick Killer' HT Drake. Bate is a powerhouse of a wrestler while Drake is known for being rather aggressive in his offence. This match should be rather hard-hitting with added spice as the winner will move on to the semi-finals.

The second quarter-final match taking place at the NE6 Suite will see Martin Kirby face Micky The Dragon. Both these men are local to the area so the crowd may be split on Sunday but both men will not give half measures in their quest to continue in the tournament and move close to the Absolute Wrestling Championship.

Finally on Sunday, Insane Championship Wrestling are holding another taping of their Friday Night Fight Club show at The Garage in Glasgow. These shows are usually packed with matches and this event looks to be no different with nine matches currently scheduled to take place. The show will see the continuation of the ICW Tag Team Championship tournament as well as two championship matches.

The ICW Tag Team Championship tournament will see the return of the Sumerian Death Squad to ICW to face Mike Bird and Wild Boar. Bird and Boar made their ICW debut in Cardiff, Wales at Gladys the Groovy Mule back in March when they challenged for the ICW Tag Team Championship. Despite losing, they made an impression with everyone hence their inclusion in the tournament. The SDS are well known for their tag team wrestling and are considered one of the best in Europe. This will be an interesting match to see who does pick up the win as either team could be a serious contender to win the tournament.

The first of two championship matches this Sunday will see Sammii Jayne challenge Carmel for the ICW Women's Championship in a Last Woman Standing match. This match came about after Carmel offered to defend the championship against Jayne. Jayne was quick to take up the offer after having a number of big wins in ICW recently, most notably over Nikki Storm which resulted in 'The Best In The Galaxy' leaving ICW. Carmel has been a fighting champion and has defended the title at every opportunity. While the opportunity is huge for Jayne this could be Carmel's biggest challenge to date as a champion. Add in the Last Woman Standing element in this match and it may come down to a battle of endurance over experience.

From one fighting champion in Carmel to another in the ICW World Heavyweight Champion; 'The Beast Of Belfast' Big Damo. Damo won the championship in his homeland of Northern Ireland in February and since then has defend the championship in Scotland, England, Wales and Ireland, a feat that no-one has done before. This Sunday he puts his ICW World Heavyweight Championship on the line once again, this time against former champion, Grado. Both these men have been travelling all over the world in recent months so the moniker of World Champion would be very fitting for both. Grado will be looking to reach the top of the mountain again in ICW while Damo shall be looking to stay as the man-mountain of ICW for the foreseeable future.