After three weeks of big matches and having it's roster heavily depleted by the recent WWE Draft, NXT looked to re-build and quickly with just four episodes until the next Takeover event. With a more low-key card, could NXT still provide the quality of action it's fans have come to expect? 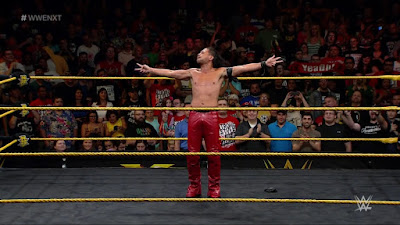 This week's main event came at the top of the show as Shinsuke Nakamura went 9-0 in NXT with a victory over Wesley Blake. A dominant performance from Nakamura here, in an entertaining extended squash, as Blake continues to find his feet as a singles competitor. The match was much more a set-up for General Manager William Regal to come out to ringside and announce that Nakamura would be facing Samoa Joe for the title at Takeover: Brooklyn II on 20th August (more on that in a moment), than it was an attempt to have a brilliant match, but of course, anytime Nakamura is in the ring it's difficult to take your eyes of the screen. Blake put in a decent performance in his role, mimicking "The King of Strong-Styles"' offence and blowing kisses at him, which made the moment he got hit in the face with the Kinshasa all the more satisfying.

Kota Ibushi made his NXT debut with a victory over Buddy Murphy, in a short contest that managed to pack a lot action into it's diminutive screen time. A much more balanced contest than the earlier Nakamura v Blake match (with the Blake and Murphy being former tag partners comparisons between the two are inevitable) and therefore it was much more exciting fight to watch. The tempo was rapid, especially as the matches headed to it's near fall rammed conclusion, with the momentum shifting one way and then another. I much prefer this type of debut for Ibushi, to say an out and out squash match, as it shows the fans of the brand, what kind of matches they can expect and offers something to look forward to, whilst also giving him a debut victory. I'd like to see what else Buddy Murphy is capable of on his own, as he gave a good showing of himself here.

Steve Cutler continued his thirteen match, 2 year losing streak on NXT TV, with a defeat to No Way Jose in less than two minutes. There was some dancing and then Jose won with a cobra clutch slam, a real treat. The real story here though was Jose cutting a killer promo on rival Austin Aries. He brought some genuine depth to his character, that it definitely need if Jose wants to progress any further on the brand. Jose built the promo well, as it grew and began to tell a story about his background, explaining his motivations for fighting and dancing and just what that means for Aries. The exclamation point left me wanting to see Jose and Aries have a fight, which I previously had been completely mild for.

The show would end with NXT Champion Samoa Joe voice his displeasure with having Shinsuke Nakamura as his Number One contender. Joe was on fire with his promo, not coming across as a cowardly heel who doesn't want to fight Nakamura, but coming across as someone who didn't believe Nakamura was good enough to get a title shot. Of course, the fans want to see the match, so Joe trying to block that makes him look like real bastard. Also, Joe referencing his own road to the NXT Championship gave the promo an extra dimension, where the viewer could see where Joe was coming from but still disagree with his opinion. Of course, by the end of the show, William Regal had forced Joe's hand and made sure the contest would take place, but somehow NXT managed to raised the stakes with this simple and effective piece of storytelling for a match that many had already labelled as must-see. 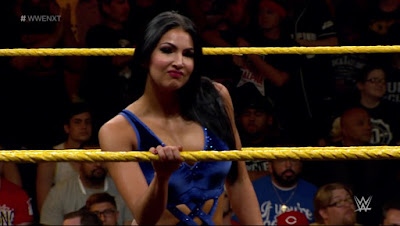 Billie Kay got her first win on TV with a victory over Stardom's Santana Garrett in a match. It was a fairly basic encounter, that without having being told a lot about Kay over her 13 month run on TV was hard to get to into. To be honest, I was more convinced by Garrett's bubbly babyface character than I was by whatever Kay was doing, that looked a bit unsure. Perhaps an interview with Kay beforehand or after would have been a better way of introducing her character fully. NXT is in real need of bulking up it's roster of women on TV, since Alexa Bliss, Carmella, Eva Marie and Nia Jax were all bought up to RAW and Smackdown Live a few weeks ago, so it makes sense to start using girls like Kay in more prominent positions but this was a flat first victory for her.

In the only tag team action on the show, TM-61 (Nick Miller & Shane Thorne) got themselves another victory, as they destroyed Rob Ryzin and Adrian Nails. After six weeks off TV, this felt like a way to keep Miller and Thorne in the consciousness of the audience, without NXT having much of a plan for either at this stage. Their opponents on the other hand were some of the worst enhancement talent who I can remember NXT using. I feel that these guys were just wondering around Full Sail University and got roped into wrestling a match. Nails wrestled in jeans, which is cool if you're known to the audience, but looks like you've just forgotten your gear if you're not. Then he took a fucking awful spinebuster, that looked like he'd never bumped in his entire life. The best thing I can say about this was that TM-61 came away unscathed and hopefully Ryzin and Nails won't be booked again anytime soon.


Clearly, this episode was never going to be as strong as the last three weeks of television NXT has produced, but this was a watchable episode that developed a couple of storylines and attempted to introduce or re-introduce a couple of competitors. Samoa Joe's promo and interaction with William Regal was the strongest part of the show with Joe delivering some great lines and creating an extra level of intrigue for his upcoming bout with Shinsuke Nakamura. The debuting Kota Ibushi's match with Buddy Murphy was the strongest match of the show, turning what could have been a rather straight-forward bout into an exciting sprint.

The rating is pulled down by the shorter segments, involving the women's and tag team divisions, which either struggled to hold my attention or were let down by sloppy enhancement talent.

With the Takeover: Brooklyn II card beginning to come together, the next few week's should begin to pick up in terms of storylines and new talent development as there's big spaces on the card left by American Alpha, Finn Balor, Nia Jax and others. It's an interesting time for the brand, let's hope that that translates as interesting television!

All content by James Marston.
Posted by QTPW at 04:19