Just like Monday Night RAW the night previous, Smackdown Live recieved a relaunch of sorts, with a brand new set, a new commentary team and it's own distinct roster. With a six pack challenge to crown a #1 contender to Dean Ambrose's WWE Championship, the wrestling return of Randy Orton, debuts from Alexa Bliss and Carmella, returns from Rhyno and Eva Marie, could Smackdown Live out do it's Monday night counterpart at the first attempt? 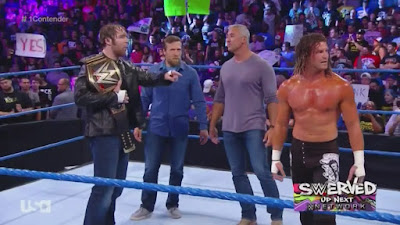 If Finn Balor getting a shot at becoming the first Universal Champion was shocking on RAW, then Dolph Ziggler becoming Number One contender to Dean Ambrose's WWE Championship was equally so, if not. Ziggler would come out the winner in a six pack challenge, that also included John Cena, AJ Styles, Baron Corbin, Apollo Crews and Bray Wyatt in a rollercoaster of a main event. I'd even noted when Ziggler had been announced for the match, that he was there to make up the numbers and take some bumps for the others who have all been pushed stronger than he over the last six months. I suppose it could have felt like a let down when he won, but because of the nature of the contest it actually felt like a refreshing flash finish, that bought the match to a satisfying sudden halt. Ziggler taking on Ambrose for the belt at SummerSlam, creates space for another big match on the card, in a way that someone like Cena, Styles or Wyatt winning wouldn't have, so it could prove to be a savvy piece of booking over the next three weeks. Also fingers crossed for Ziggler heel turn as the promo possibility would make for an awesome feud.

Taking a similar route to what was seen on RAW, Smackdown used it's first show to showcase as many of it's wrestlers as possible, whilst also putting a meaning behind the multi-man madness. This is a pretty sound strategy, as it says to the audience, these are our top guys and allows each talent to show what they have to offer all at the same time. Apollo Crews and Baron Corbin were both elevated from being involved, with Crews especially impressing, whilst simultaneously getting pushed heavily in the booking. The sequence between the two showed they both have more potential than they have shown since being called up, whilst having Wyatt pull the ref out of the ring to deny a Crews victory will do the former Uhaa Nation wonders going forward. This was a great TV main event, that was full of excitement from the ring bell, went at a lightning quick pace, had a number of huge false finishes and provided a shock victory, a superb end to the first episode of the re-launch.

Taking up the semi-main duties for the night was Randy Orton's wrestling return as he defeated Intercontinental Champion The Miz clean in less than five minutes, with a pair of RKOs. This was an enjoyable bout, that had the beginning of a great story and some world class selling from "The Viper", but two things bugged me. Firstly, Orton sitting around for ages after hitting the first RKO, whilst the commentators talked about Orton going to a place that he'd not been for a long time. I sat watching just a bit confused, thinking that "The Apex Predator" was going to punt the fuck out of Miz's skull, but he just hit a second RKO. Secondly, The Miz looked a complete chump in the finish. He's the Intercontinental Champion for fuck sake, if you want to use him this way then take the belt off him and give it someone else! Everytime the belt is treated like this, it makes it harder to give a shit when someone wins the title, which in turns means that WWE then gives less of a shit about the belt and does more things like this. Good TV bout, with strong performances, but weak booking.

Before the match, Orton was crowned in the undisputed champion of chat show guests as he made an appearance on Miz TV in a decent segment, that the crowd were hot for. The gimmick of Miz interviewing himself, after teasing Orton as a guest, has been done to death over the last few years and whilst it did get some heat, as a home viewer I was hoping to see something a bit fresher. Orton's charisma has really shone through in this run of chat show segments and he was on form here, having fun with the crowd and generally looking like he was having a good time. When you watching someone enjoying themselves, it's difficult not to like observing. The jokes about Miz touching himself and potentially getting bummed by Maryse weren't my cup of tea, but were delivered well and the crowd seemed to be down for that type of tomfoolery. Of course, the segment lead into the match with Maryse accepting Orton's challenge on behalf of her husband. 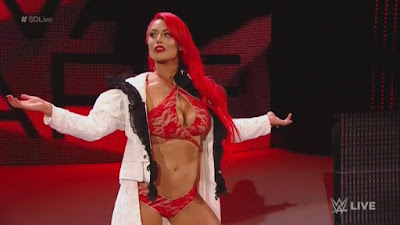 A re-match for two night's earlier, would see a reverse of the result as Becky Lynch was able to gain some revenge on Natalya by tapping her out with the Dis-Armer after a decent, but unspectacular match. Of course, it was nowhere near the level of Charlotte and Sasha Banks' epic the night before., but it was crisp throughout and was probably a step up from the previous night as pulled out some bigger moves, like Lynch's diving leg drop and a big german suplex from Natalya and put together clever sequences of reversals that weren't all based around their submission holds.  It was however just a set-up to introduce Smackdown Live's new roster of women, as a Lynch interview with Renee Young was interrupted by Alexa Bliss, Naomi, Carmella and finally, Eva Marie. Bliss probably did the strongest job with her promo and seemed to get over quickly with the crowd. Marie's entrance was an interesting one with an over-the-top announcer listing her achievements, before the show cut to elsewhere. As cool as Marie's entrance was and the heat that she got, it felt more like a coma, than a full-stop or exclamation point.

In the show's opening match, Apollo Crews would earn his place in the show's main event, by defeating Aiden English, Alberto Del Rio, Erick Rowan, Fandango, Jey Uso, Kalisto, Kane, Konnor, Mojo Rawley, Simon Gotch, Tyler Breeze, Viktor and Zack Ryder in a battle royal that was as flat as a witches tit. Before the field had been wittled down to the final four, the bout was so dull to watch, with Kane's dominance and ADR being eliminated so early being the only notable occurrences. With Kane, Crews, Kalisto and Zack Ryder left, the crowd was solidly behind Ryder, with loud cheers and chants for the Long Island Iced Z. So what did the lad do? Botch everything he hit from then on. His diving elbow drop was a thing of perverse beauty, as he landed on his feet after a stumble and then hit the elbow drop anyway. Kane being booked so strong was beginning to annoy me a little, however with it being used to give Crews the rub, after he flipped out of a chokeslam and eliminated the veteran to win, I was much happier by the end of the night. Compared with RAW's two matches that set-up their main event this battle royal was more than a bit of a shambles.

With an opening segment akin to the previous night, the show began with Commissioner Shane McMahon and General Manager Daniel Bryan addressing the roster about their plans for the show. Obviously, we know that he announced they announce the six pack challenge and the battle royal, but there was also some particularly interesting wording in there from Shane O'Mac. He mentioned more than a few times that Ambrose was the only top champion in WWE, a nice reference to RAW launching the Universal Championship, without whacking the audience over the head with the RAW v Smackdown Live rivalry. I did think it was a shame that McMahon and Bryan didn't address anything to do with the women, who had to stand awkwardly around the ring as the men talked about the men. After the major women's match on RAW, I was expecting something to be made of Smackdown Live's roster here.

In an oddly entertaining segment, Rhyno returned to WWE by goreing Heath Slater, after Slater had been canvassing Shane McMahon for a job with the brand.


With RAW truly knocking it for six on Monday, Smackdown replied by getting a couple of runs the day after. The main event was a great piece of television, that ended the show on a real highnote, but the rest of the show seemed to be scratching around with a couple of ideas that didn't completely come off.

It's way too early to call which show is the better one just yet, with neither brand getting into feuds or storylines too heavily in the first week, but on evidence of these two episodes alone, Monday Night RAW has the upper hand for now.