This weekend as with almost every weekend, British Wrestling is bulging with events all over the country. This week's edition see's us in Wolverhampton, Stevenage and London with some pretty big shows. So without any further ado, let's get Ready For The Weekend! 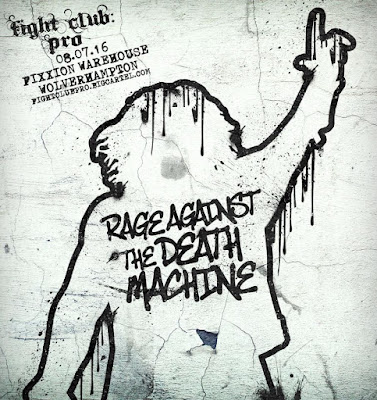 The weekend kicks off on Friday with Fight Club: PRO at the Fixxion Warehouse in Wolverhampton with 'Rage Against The Death Machine'.

The main event shall see 'The Death Machine' Sami Callihan bring his rage to FCP when he faces the man who has been the foundation of the promotion, 'The Super Don' Trent Seven. Both of these men are known for a style which can be brutal at times. We expect this match to showcase the strong style these men are known for.

We've spoken before about the issues between The Hunter Brothers and the Facesmashers. Well things have still not been settled between these two teams and doesn't look like it will be any time soon. To add another chapter to their storied rivalry, Hunter Brothers will be in singles action when Lee Hunter faces Dan Moloney while Wild Boar shall compete against Jim Hunter. Don't expect two matches that have clean decisions is all we'll say about these contests.

Travis Banks arrived in Fight Club: PRO a number of months ago and was an instant hit as he has been all over the country. He's back again this Friday and he'll have possibly his biggest match since relocating to the UK when he faces the WWE Cruiserweight Classic's Zack Sabre Jr. Banks has impressed everyone as we have mentioned and this shall be a real test and opportunity to impress even further when he faces a true world-class wrestler in ZSJ.

Moving on to Saturday and we head to Stevenage for Southside Wrestling Entertainment "Gunning For Glory" at The Gordon Craig Theatre.

The show will see the feud between Stixx & Flips' Stixx & Chris Tyler and The Second City Collective's Ryan Smile & Damian Dunne continue. These two teams have been fighting back and forth for ages with Stixx & Flips finally securing themselves a shot at the SCS's SWE Tag Team Championship. However before their championship match, both teams shall meet again in a six-man tag team match with Marshall X joining The SCS and former WWE star D'Lo Brown aligning with Stixx & Flips. Both teams will be looking for the win give them a mental advantage over the other before the gold is on the line.

Robbie X turned on his partner a number of months ago and since then has had no contact with SWE. That was until very recently when he challenged Mark Haskins to a street fight. Haskins has been waiting for the chance to gain revenge and wasn't ever going to back down from this challenge. The unknown in this match is what sort of mental state shall Robbie X be in. He was extremely angry and aggressive the last time we saw him in SWE. Could he be even more dangerous now?

The main event this Saturday will see the bad blood between The Righteous Army and El Ligero finally come to an end. Hopefully. We'll see Righteous Army's Joseph Conners, Paul Malen, Kay Lee Ray & The Pledge face Ligero, Nixon Newell, Hardcore Holly and a fourth mystery partner in an elimination match. If Ligero's team defeat Righteous Army, then they shall be force the disband immediately. However a loss for Ligero would see him forced into joining Righteous Army. This is a match that neither team can afford to lose for their long-term future.

‘The Aerial Assassin’ Will Ospreay vs DJ Z 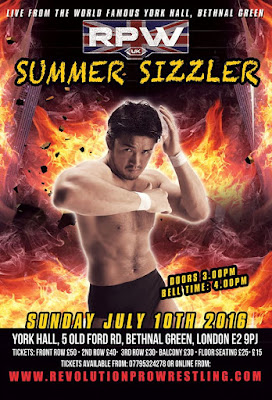 Finally we end the wrestling weekend with a trip to London which is where we tend to end our weekends through either coincidence or just luck. This weekend see Revolution Pro Wrestling's 'Summer Sizzler 2016' take place at the York Hall in Bethnal Green, London.

The main event for this match is the calibre that we have come to expect from RevPro as Zack Sabre Jr will defend the Undisputed British Heavyweight Championship against Katsuyori Shibata. This match would not look out of place on a New Japan Pro Wrestling event and could well be one of the best matches we see in 2016. This match is so difficult to call that RevPro have already ensured that Shibata will be available for a future event in the event that he wins this Sunday. London is likely to see something very special.

Pete Dunne has risen to the top of RevPro at lightning speed, capturing the British Cruiserweight Championship on his first night. Since then he has delivered stand out matches each and every time. His challenger this Sunday is well-known for standing out as he's the 2016 New Japan Best Of The Super Juniors winner and former champion; 'The Aerial Assassin' Will Ospreay. These men have already had and shall continue to have the most successful year of their young careers in 2016. A win for both men would only add to that success.

Matt Sydal has been a regular visitor in Revolution Pro Wrestling and has a number of highly rated matches with men of similar size and style. However this Sunday he'll have a match with a man who is everything that is opposite of his style, 'The Beast Of Belfast' Big Damo. A true heavyweight who is known for his hard-hitting style. Sydal has worked for the biggest promotions in the world and faced equal world class competition. Damo will add to that world class competition this Sunday but he shall be an opponent the likes of Sydal may have never faced before. Talent and speed shall be Sydal's allies in this match. Damo will know Sydal's skills and will look to add another international scalp to his impressive list of opponents.

‘The Beast Of Belfast’ Big Damo vs ‘Reborn’ Matt Sydal

That wraps up this week's preview of the weekend's wrestling schedule. Of course, there are many more events taking place over the three days. To find out more about the shows we've highlighted here as well as all the others, check us out at www.wrestleropesuk.wordpress.com for the latest show and match announcements, British Wrestling event list, interviews, exclusive columns, reviews, reports and results!
Posted by QTPW at 14:57