As Smackdown headed out of Backlash, John Cena would return and, alongside former Champ Dean Ambrose, confront new World Champion AJ Styles. Would the blue brand be able to keep the momentum going after a hot supercard two days prior? 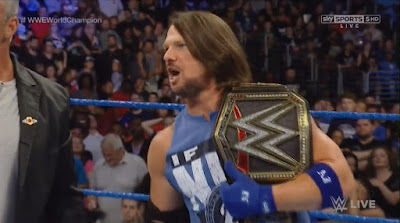 With AJ Styles beginning the show with his newly won World Championship belt around his waist, the opening segment would get heated quickly as John Cena made his return, Dean Ambrose interrupted and Commissioner Shane McMahon booked a main event for No Mercy on 9th October. This was a brilliant start to the evening with all four men being on great form on the microphone and a number of different stories being either developed or introduced. Styles berating the crowd, constantly saying "I told you so" about both beating Cena and winning the World title was just the right side of annoying, to the point where you want to see someone kick him hard in the shins. Styles calling himself the "Champ that Runs the Camp" is totally cringey, but works completely with his character. Having the popular McMahon admonish Styles for the way he won the title was a clear attempt at piling on the heat onto the group's #1 heel, but it was also still rather entertaining!

The thing that caught the Philadelphia crowd's attention the most was the exchange between Cena and Ambrose as the pair pulled no punches, telling each other exactly how they felt. The Cenation Leader's initial interruption of a Lunatic Fringe rant was as fiery as we've seen Cena in a long time, as he ripped into Ambrose for complaining about losing to a low blow, whilst also getting a superb reaction for referencing Ambrose's appearance on the Stone Cold podcast. Ambrose's reply would attempt to match Cena's level, as he'd use phrases like "lazy part-timer" and accuse Cena of not being able to get it done in the ring anymore. It was great to see two babyfaces get their teeth into each other, as clearly the two characters wouldn't be the best of friends. They managed to combine the elements of reality with fiction well and if it continues this way during the build to the Triple Threat match then the next three weeks should be a real treat.

The main event featured John Cena and Dean Ambrose teaming up against AJ Styles and The Miz in a decent TV scrap. Miz would continue his storyline with Daniel Bryan by attacking Bryan's chosen opponent for Styles, James Ellsworth [Big Time Wrestling's Jimmy Dream], on the entrance ramp to take his place in the match. This was a cool moment that saw Miz continue to up his aggression levels, as he screamed about being a main eventer. The contest would play out quite nicely with both duos making surprisingly strong partnerships, with the heels especially putting together good stuff when in control. There was plenty of referee distractions and underhanded tactics, as well as some nice double teaming. Both Ambrose and Cena would get hot tag sequences, with Cena's coming at the conclusion of the bout, which booked-ended Styles and Miz's slower paced team attacks. The finish was a nice twist on the Cenation Leader's usual comeback sequence, as Miz took the familiar bumps and as Styles interfered, Ambrose made the save, throwing the Phenomenal One to the outside and hitting a suicide dive, leaving Cena the space to nail an Attitude Adjustment and get the pin on the Intercontinental Champion. Whilst The Lunatic Fringe would hit Dirty Deeds on Cena to close the show and got a good deal of heat because of it, I would've liked to have seen more tension between them during the contest, especially considering the exchange they earlier to open the show.

Alexa Bliss earned a Women's Championship match with Becky Lynch, thanks to defeating Naomi, Nikki Bella, Natalya and Carmella in a Fatal Five Way encounter. The contest didn't quite have the same depth as the Six Pack Challenge from Backlash, but there was still some good work on display. Bella and Carmella's feud continued with the pair scrapping from the beginning and there was two strong near falls. The majority of the contest flowed well, although I did feel that there were some sequences that came across as overly choreographed, especially when Naomi was rather obvious about making sure she was in the correct position. The finish, however, was put together astutely, with Carmella hitting Bella with a thrust kick as the latter seemed destined to get Bliss with a Rack Attack, however moments later it was Bliss who had the win after sending Carmella to the outside and stealing the pin on Nikki. The Women's division on Smackdown has been made to feel ultra competitive over the last few weeks, so I'm interested to see how the brand manages to handle keeping multiple storylines going without having all six girls involved at the same time. 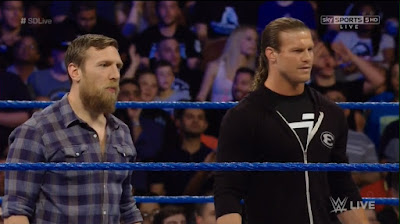 A rather odd talking segment where Dolph Ziggler would challenge The Miz to a rematch for the Intercontinental Championship, concluded with Miz walking out through the crowd after an argument with General Manager Daniel Bryan. Ziggler is usually a slick talker, but on this occasion, after an early slip up, he struggled to find any connection with the crowd, which is something that his current rhetoric relies upon. Miz and his wife Maryse on the other hand have that connection in spades with both getting shit loads of heat, which only got hotter when Maryse interrupted Ziggler to speak for her husband. I'm not quite sure what to make of how things ended as after Bryan had initially agreed that Ziggler deserved a rematch, Miz refused saying he wouldn't renegotiate a contract until his demands were met. before walking out through the crowd. It definitely asked more questions than it answered and left me a little bemused if I'm honest! I guess, we'll just have to keep watching to see what is actually supposed to be going on.

A unique contract signing took place as Heath Slater finally ceased to be the hottest free agent in WWE and signed with Smackdown following winning the Tag Team Championships with Rhyno at Backlash! Whilst the segment didn't quite have the same feel that the duo defeating The Usos the night before had had, it was still great to see one of the brighest acts in WWE today get more and more television time. Slater went over some old ground with his promo, but who cares at this point, the lad can talk about his kids all day long if he wants to and Rhyno can just look like he wants to beat the shit into anyone in the background. Having The Ascension come out to challenge for the belts was a bit of a lame conclusion to things and Konnor and Viktor didn't really make the most of their opportunity, screwing up their only big spot of the match. This was an abridged version of Rhyno and Slater's other matches across the last few weeks, with The Man Beast eventually getting the win with a Gore to Viktor.

Bray Wyatt and Randy Orton's feud took on a different direction, when Erick Rowan would ambush The Apex Predator to bring a good segment to a close. Both Orton and Wyatt cut strong promos on each other, as The Apex Predator addressed Wyatt's attack on him at Backlash in the ring. Orton seems to be relishing this feud as it's allowed his character to become a little bit darker again, which produces much more interesting material, like him insinuating that Wyatt was afraid of fighting him and calling for his rival to "face his fear". The Eater of World's various supernatural gimmicks were used to the promo's benefit as Wyatt initially appeared on the screen, with a creepy speech telling Orton not to sleep, before appearing at ringside. This would build to Rowan's interference and his supposed re-alignment with Wyatt. As much as a cool moment as it was with the lights repeatedly going out, heading forward it feels like a bit of a backwards step for both Wyatt and Rowan. However if this means Luke Harper is returning soon for a brief reunion I think I'll get over it. 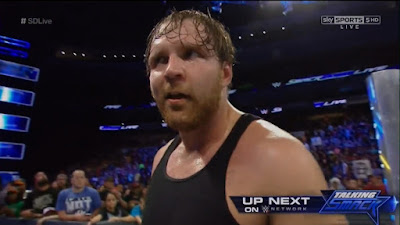 This was a fairly decent episode of Smackdown Live, with a lot of strong storyline advancement throughout the show as the brand comes out of Backlash and turns it's attention towards No Mercy. The opening segment with Styles, Cena, Ambrose and McMahon was very good, with everyone involved putting in real effort, whilst Cena and Ambrose both brought some fire that will probably carry the story towards the show. Orton and Wyatt also put on good performances on the microphone as their story took a different twist. In the ring, the main event with Cena and Ambrose against Styles and Miz was a cracking tag bout, the Women's five way was exciting, yet brief. I'd have liked the show to feature more wrestling, as the only two matches on the show were short tag team contests.

Heath Slater's contract signing didn't quite live up to expectations, struggling to find a punchline and then moving into a match with The Ascension, whilst the Ziggler and Miz confrontation didn't really work either, especially after The Show-Off has lost in two high profile matches!

Having a lot of focus on the Cena, Ambrose and Styles storyline did this show well as almost everything that the three were doing together, whether that be on the microphone or inside the ring was entertaining to watch and because there was lots of it the show ends up a high score. There was some support from the Women and the Wyatt/Orton story, but overall the main event story pretty much carried this show.
Posted by QTPW at 21:22