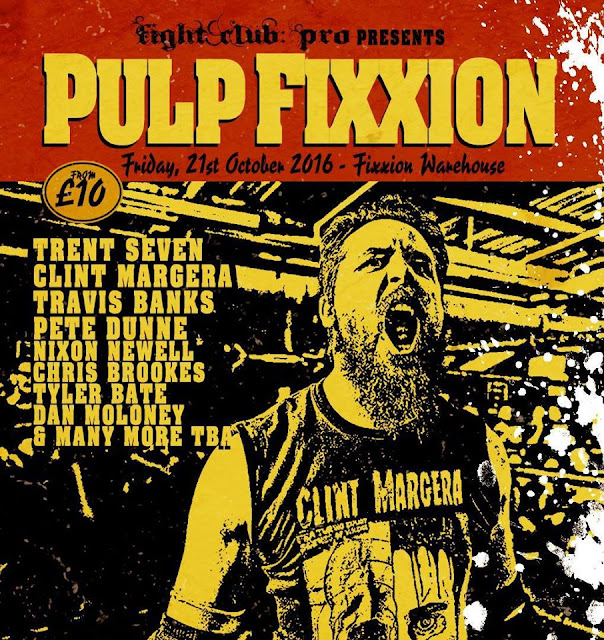 On 21st October 2016, Fight Club: Pro returned to Fixxion Warehouse in Wolverhampton, West Midlands for the first show of three across the weekend, as they presented Pulp Fixxion. With a main event that saw FCP Champion Pete Dunne team with the debuting Mikey Whiplash to take on former champions Clint Margera and Trent Seven in a No Disqualification Match, as well as Kay Lee Ray, Joe Coffey, Kimber Lee, Nixon Newell and Shane Strickland in supporting matches, could FCP start the weekend in style? 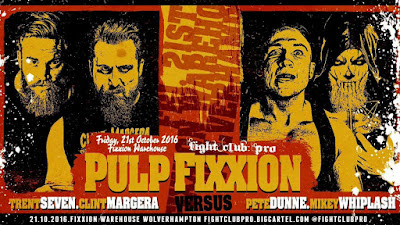 The headline bout of the evening saw Clint Margera and Trent Seven pick up a momentum building victory over FCP Champion Pete Dunne and Mikey Whiplash in an action-packed tag team collision. From before the bell, when Margera came flying onto Dunne and Whiplash, this was brutal fight that had plenty of energy and a boat load of intensity. The first couple of minutes saw all four on the outside of the ring, with Seven hitting a suicide dive onto Dunne who had been seated at ringside, before Margera was launched into the chairs on the other side of the ring by Whiplash. Both moments looked vicious and the blood-thirsty crowd wanted more. They certainly wouldn't be disappointed as all four men delivered top draw performances, pacing the encounter well and picking things up when needed. This was a great example of British strong-style.

The idea that these two teams were evenly matched was spread throughout the bout, with neither getting the upperhand for long. This was seen during a seated strike battle on the outside and became even clearer when all four went for running front dropkicks at the same time, leading to the foursome hitting multiple strikes on each other one after another. This would play nicely into the closing stages of the bout, as Seven was able to save Margera from taking a con-chair-to from the dastardly duo and Whiplash would save Dunne from taking a piledriver from Seven. By this point, having watched the two teams pull out their biggest moves and bring steel chairs into the mix, it felt like it would take some special or a big mistake to conclude the bout. In the end, it took a tiger suplex from Seven, a hard forearm from Margera and a Piledriver from Seven to get Whiplash's shoulders pinned to the mat. What about Dunne? The Bruiserweight simply watched the pinfall before walking out. Not only had Whiplash saved Dunne from taking a piledriver earlier, but he also stopped the pin when Dunne took one earlier in the clash! As hard-hitting and violent as the match was, it could be easy to miss the story that was told throughout the outing, but it created a satisfying watch for those keeping up.

Dan Moloney's victory over Fire Ant featured a nice mix of good banter and solid wrestling, as Moloney continues to get more and more comfortable with every match he has. The crowd latched to Moloney's slightly small boots and began to serenade him with the Roderick Strong hymn book. The Superbeast's reactions to this were priceless and I hope that this only develops across the weekend, as there is some real opportunities for more comedic moments and to create even more heat for Moloney. The contest itself was very good stuff, with Ant always seeming to have Moloney's number, until that it is Moloney went for Ant's antennae, in a similar way to how the crowd grabbed onto the opportunity to sing "Shitty Little Boots" in various formats. The pair created some smooth wrestling inside the ring, with a number of tight reversals, whilst Ant got a strong near fall off a trio of big moves as he hits a Frankensteiner, a PK and then a brainbuster in quick succession. Having split from Facesmashers partner Wild Boar at Project Mayhem V, a victory for Moloney has set him on the right path with Boar conspicuous by his absence.

Chris Brookes continued to get under the skin of the Wolverhampton faithful as he got a win over 2 time CZW Wired Champion Shane Strickland. This was strong blend of slick wrestling and comedic japes as Strickland made his debut in FCP and quickly got over with the crowd, partly because he wasn't Chris Brookes and partly because he's got some fun offence. The match played out fairly simply as Strickland's lucha stylings went up against Brooke's general twattery. Notes I wrote on this match include "Wrestling with Brookes being a general wanksock" and "Brookes is dick", I feel that they kind of sum up how fucking angry Brookes makes me. He put Strickland in a camel clutch and gave him a wet willy. Who does that? The wrestling was paced well, with Strickland getting to show off in exciting bursts, that made Brookes' ways even more frustrating. It would often be Strickland's pacy, risk-laden offence that would catch him out and that would be how the match concluded, because after a missed 450 splash, Brookes would finish off his opponent with a superkick and elevated spinning neckbreaker, before locking in the Octopus Stretch for the submission victory. A fun opener to the main show, that got the crowd nice and warmed up for more wrestling. 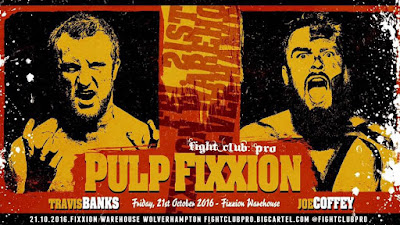 Outside of the main event, Joe Coffey pinning Travis Banks was the strongest fight of the night. Banks had suffered nine consecutive losses since joining FCP in February, despite coming close against world class talent like Zack Sabre Jr, Sami Callihan and Trent Seven, and that story really drove the match for me. Each near fall for Banks had so much more behind it, as like his previous FCP matches, Banks appeared to come as close as you can come to winning a match without having your hands raised. Banks hit a number of his big moves including the Running Knee, Brainbuster and a springboard roundhouse, but couldn't hold Coffey down for long enough. This was a real ding dong strong style battle, with the pair not holding back, as the action went mostly back and forth throughout. The finish would see Coffey having to dig deep, removing his elbow pad and after a flurry of action, he'd connect with his AwRaBestFurThaBells lariat combination to pick up the win. It was another tough loss for Banks, as the desperation that had caused him to hit a huge suicide dive earlier in the match, turned to frustration at having lost once again. It feels like it's only a matter of time before Banks snaps and with matches against Fire Ant and Shane Strickland still to come this weekend, it may happen sooner than we think.

Kimber Lee would come out on top of an entertaining women's match, that also including Nixon Newell and Kay Lee Ray. This bout was almost entirely "Everything you can do, I can do better" as the trio traded headlocks, pinfall variations, forearms, German suplexes, reverse ranas, before beginning to go for their trademark moves. Despite just seven minutes of ring-time, the three way seemed a lot longer for how much the ladies managed to cram into the match, that seemed like it never took a pause for breath! The reverse rana sequence is one of the silliest things I've seen in a while, for all the right reasons. Having three all play babyfaces could have easily caused issues, but the trio worked hard to keep the crowd interested and the audience was happy to chant for all three in various combinations and simply enjoy the grappling. The sequence of near falls in the last leg of the bout were quality stuff, with KLR coming close on a Gory Bomb, Newell nearly winning with the Shiniest Wizard you ever did see, before KLR was able to block a Vulture Culture Destroyer attempt, only to find herself on the receiving end of a massive powerbomb from Lee. With Newell scheduled to face KLR on Saturday and Lee on Sunday, there's more to come from the women of FCP this weekend!

A special pre-show match saw the debuts of Omari and TK Cooper, with the Big O coming out successful in a decent contest that showcased each man well. With just five minutes, both men established themselves well with the audience, with Omari receiving a strong reaction after being announced as an FCP trainee. Cooper controlled the majority of the outing, after catching Omari with a tasty axe kick on the apron, going on to hit a variation of the Blue Thunder Bomb. It was interesting to see Cooper attempt to pull out a number of tricks and flips, which he almost always missed to give Omari an opening in the match. Cooper has a lot more in his locker than I think I've seen from him previously and I'd very interested in seeing him join the main FCP roster to see just how much he can do when given the chance. Omari has quickly developed into a promising pro wrestler also and it was nice to see a different side to him having watched him come up through Kamikaze Pro. I'd like to see him use his size more and up his aggression levels at points, but this is certainly a young man with a lot of potential. 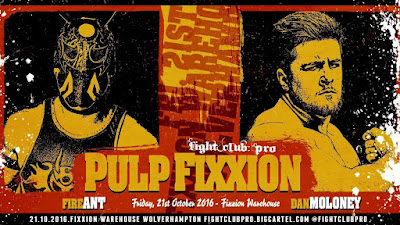 Show in a Sentence - Really good fun, good solid start to the weekender.