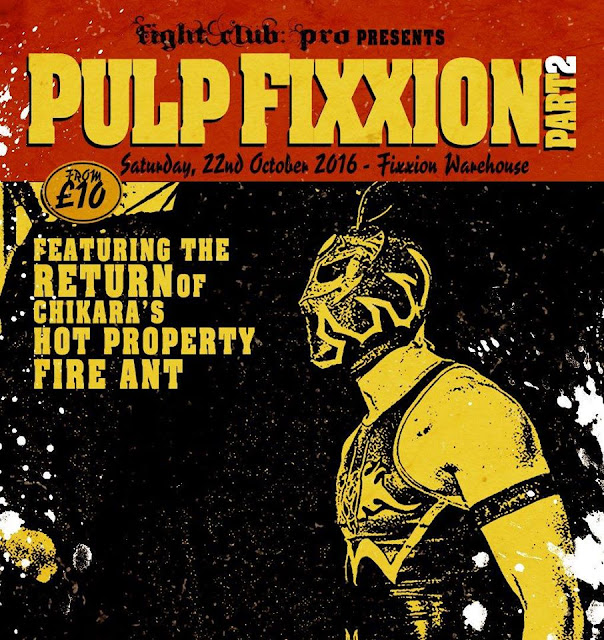 On 22nd October, Fight Club: Pro was at Fixxion Warehouse for the second night in a row, with Part 2 of Pulp Fixxion. The main event saw Pete Dunne put his FCP Championship on the line against Trent Seven, whilst Mikey Whiplash and Clint Margera went at it in a No Disqualification Match. With the likes of Kay Lee Ray, Kimber Lee, Nixon Newell, Shane Strickland and Fire Ant making up the undercard, could FCP raise the bar following a very good event just 24 hours earlier? Let's have a look, brah. 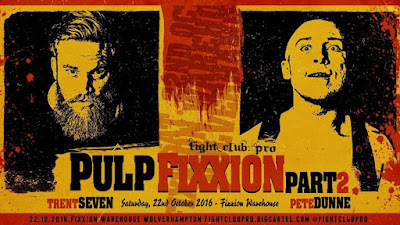 Pete Dunne retained his FCP Championship with a victory over Trent Seven in what was the best match across the two Wolverhampton shows. The pair might be PROGRESS Tag Team Champions, but in FCP there's no loved lost between the duo and that showed before the bell with Dunne striking before the announcements even began. The crowd (including myself) were hooked from that moment onwards as Dunne and Seven worked a 16 minute sprint. The bout was a mixture of Seven no-selling shit and some huge dramatic near falls. The two tropes seemed to play into each other, with Seven's ability to dig deep following taking huge moves like a superplex, giving the match a sense of momentum, allowing the fans to start to believe that Seven could take the title from Dunne at the first time of asking. This meant that each near fall had some real weight and believability. Dunne running into a powerbomb, before Seven turned it into a Single-leg Boston Crab, that he's put away Tommy End and Mark Haskins with recently, was a moment that I was completely wrapped up in, desperate to see the heel champion quit. This was helped by how well Dunne sold the hold and the previously mentioned drive of the contest.

The finish saw a whole lot of shenanigans, beginning with a spectacular ref bump that saw Shay Purser moved into the path of a Seven suicide dive by Dunne. This caused Purser to go through the two rows of ringside seating and It looked wonderful (obviously not for poor Shay) being timed perfectly and getting a big reaction out of the Wolverhampton crowd. Every second following this was brilliant to watch, certainly helped by the emotional investment that I have within FCP as well as the two performers and characters, but I'd like to think it was equally as exciting and entertaining for those attending their first show with the company. In a sequence that was a rollercoaster of emotion, Seven hit a dragon suplex and spinning piledriver, but there was no ref to count the pinfall, but after Dunne had caught Seven low and hit his DT3 (Pumphandle Facebuster) a second referee, Joel Allen, managed to come flying out of the curtain, only for Seven to kick out at two and get another thrilling near fall off a roll-up as Dunne argued with Allen. By the time, Dunne got the submission win, it was as crushing a moment as it should have been, rounding off a wonderful final stretch and enhancing Dunne's credentials as champion. When the moment comes for Dunne to lose the belt, that moment will be all the sweeter because this bout took place.

In the semi-main slot, Mikey Whiplash picked up his first victory in FCP, by defeating former champion Clint Margera in a No Disqualification match. This was an incredibly creative contest, as the duo took a limited selection of weapons and constructed a number of breath-takingly brutal highspots. Without using the cavalcade of "toys" that were seen across Margera's series with Chris Brookes earlier this year, the bout kept things interesting by having each spot feel bigger and more impressive than the last. This was an aggressive and violent display from the beginning as the two threw forearms at each other and then threw each other into the ringside chairs and walls. This was two chaps with no real backstory, beyond the tag match from the Friday night, just battering the piss out of each other for 15 minutes, just because they bloody could.

The final three spots of the match were stupid, silly stuff (Meant in the best possible way, that you can call something stupid or silly) Whiplash took a superplex through some chairs, Margera took a slam off the top rope through another load of chairs TO THE FLOOR and then Whiplash hit a Death Valley Driver onto a pair of interlocked chairs on their side to get the win. Any three of those spots could have ended the match and I don't think anyone would have felt hard done by had that been the case. So, is there a case to be made for their being "too much" here? Probably. Is that a case that I'm going to put forward? Fuck no. As uncomfortable as some of teases and spots made me feel at points, it kept me completely involved in the contest as I was on the edge of my seat (bad back and all), partially in anticipation of what carnage was to come and partially because I was hoping neither performer would end up seriously hurt by some of the more high-risk aspects of the bout. The victory going to Whiplash was a slight shocker, as I expected him to come in and put over the FCP regulars, but I'd certainly be up for seeing more Whiplash in Fixxion Warehouse in 2017. It'll be interesting seeing how he'll fit into the wider picture and storytelling within the promotion. 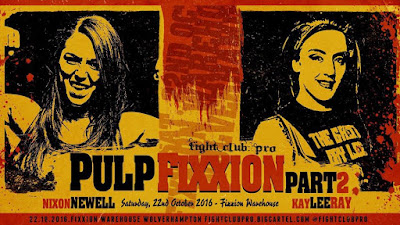 Nixon Newell picked up a big win over Kay Lee Ray, in a match that is difficult to describe because of the ridiculous amount of styles and influences the duo used throughout. Like one moment the pair were doing a cool back and forth headlock and pins thing, which mimicked what had been seen in the Three Way with Kimber Lee from Pulp Fixxion and then all of a sudden Lee and Shane Strickland were having a dance off in a scene reminiscent of the 2001 The Simpsons' episode Tennis the Menace! The match didn't need the dance off to be entertaining, but I also don't feel like it detracted from the quality of the bout either. The pair continued with the back and forth and did so very well with a series of suicide dives, strong-style forearms and a number of finisher attempts, whilst also mixing in some comedy like chopping referee Shay and having him assist Newell in an inadvertent Stunner. It was a difficult task to try and include so much contrasting content within the match but Newell and KLR created something that was entirely enjoyable, featured some excellent wrestling and looked a lot of fun to be involved in as FCP continues to develop it's women's division. This was definitely a step in the right direction.

One of the strongest stories in FCP in 2016 has been Travis Banks' quest for a win and it was in his loss to Fire Ant (putting him 0-11 in FCP) that it really began to shine and develop into something that currently feels like it could become something particularly special into the new year. Whilst the match seemed to take a couple of minutes to fully connect and grip the crowd, the final stretch of combat was superb stuff, as Banks came agonisingly close to getting his first win in the promotion. Two near falls for Banks stand out in particular, the first being the Kiwi Buzzsaw withstanding a barrage of offense, including a tope conhilo, high crossbody and PK, only to reverse a brainbuster attempt into one of his own, with the second coming moments after when the New Zealander showed his frustration all over his face, and hit a corner roundhouse kick, only for Ant to put his foot on the ropes before the three count. I was so involved in the losing streak angle, that by the end of the bout I found myself turning on Ant, despite him not doing anything wrong at all. I just wanted Banks to win, goddamit. I love being able to get sucked in by the wrestling I watch, get lost in it and begin to engage with narratives and this angle is certainly ticking those boxes right now, with this bout with Ant being a strong continuation of the story.

In intergender action, Chris Brookes went over Kimber Lee in a fun bout that told a decent story. In my review of Pulp Fixxion, I spoke about how much I hate the Brookes and his asshattery in FCP, which if you've read any of my reviews (or even just another paragraph of this one, I suppose) then you'll know I think that this is a wonderful thing. Before the match began the Calimari Catch King attempted to get out of the bout, revealing that he was actually in love with Lee, giving this as the reason that he lost their previous bout during the CHIKARA Anniversario Tour in May. This was played well by both performers, with it being clear that Brookes simply wanted a night off and Lee wanting nothing to do with it. After an early flurry from Lee, Brookes would control the match following a big boot, grounding Lee and just generally being a cockwomble about it all. It all worked nicely into a strong comeback from Lee, which included a sharp near fall after Brookes ran into a sit-out powerbomb. Brookes finishing sequence was being heavily put over across the weekend, as he hit a superkick and rope-hung whiplash neckbreaker, before locking in a double armed octopus stretch for the submission victory. I'm certainly looking forward to seeing how this plays into future matches in FCP.

The opening match of the show saw Dan Moloney defeat Shane Strickland with his deadlift spinning sitout powerbomb, in what was one of the best, if not the best match I've ever seen out of the Superbeast. There was some tremendous wrestling in this one, as Moloney and Strickland's styles connected well, with Moloney able to operate in the powerhouse role, whilst also showing some real skill in being able to up his pacing and go toe to toe with one of the speediest performers on the Indy circuit. As much as Strickland is a hugely impressive wrestler to watch, thanks to his pace and varied offence, including a wonderful sequence that concluded with a rolling thunder into a jumping cutter, most of my attention was on the local Moloney. He handled the crowd's chants surrounding his smaller than usual footwear well and genuinely looked to be developing into potential top tier star. FCP continued to build it's roster of villains with the Moloney victory, joining the wins for champion Pete Dunne, Mikey Whiplash and Chris Brookes, across this show, seemingly with an eye on the Infinity tournament on 25th November. 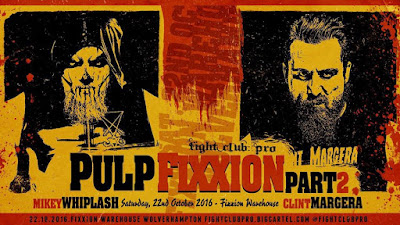 Show in a Sentence - A very good evening of wrestling, that upped the quality in a number of areas from the stellar card the night before.

All images are the property of Fight Club: Pro.
Posted by QTPW at 18:28