The 12th October episode of WWE's NXT show was headlined by former Tag Team Champions Buddy Murphy and Wesley Blake facing off with each other for the first time, although Samoa Joe had other plans. TM-61 (Nick Miller [Mikey Nicholls] & Shane Thorne [Shane Haste]), Tino Sabbatelli and Riddick Moss featured in the other high profile bout. After a less than stellar episode last week, would NXT show any signs of improvement? 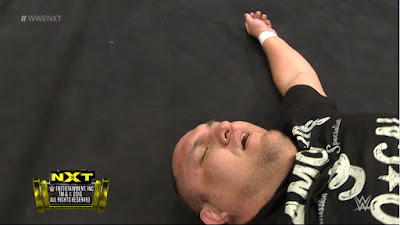 If you'd been watching the last few weeks of NXT then I'm sure you'd have been able to guess that Samoa Joe was about to interfere during Buddy Murphy and Wesley Blake's grudge match. It just felt like the natural progression of the two storylines. Murphy and Blake were actually doing some pretty good work in the ring, telling a cool story of them both being very familiar with each other and I feel like the crowd was getting into it by the time Joe came charging down the ramp. There's definitely space to redo that match at a future date or even reform the team because of the attack. What followed with Joe calling out NXT Champion Shinsuke Nakamura once again was a brilliant watch. The King of Strong Style standing on the stage and removing his neck brace produced a great visual, before the stakes were upped in a pull-apart brawl. Joe and Nakamura brought the intensity in a brawl that had a very different feel to their pre Takeover: Brooklyn II brawl. In the end it was Joe who was left laying in the ring, after plenty of twists and turns. After wanting to fight Nakamura for weeks, it will be interesting to see how Joe reacts over the next few weeks.

In the Dusty Rhodes Tag Team Classic, TM-61 defeated Riddick Moss and Tino Sabbatelli to advance to the second round in a mostly dull encounter. This was Sabbatelli's debut and Moss's first bout in around a year and whilst they both looked great, I didn't see much from them to get particularly excited about. It was telling however that Full Sail Arena began dueling chants about Sabbatelli, instead of getting behind a TM61 side who are yet to get over with the audience, despite obvious talent. The contest felt like it was overly long for what felt like a foregone conclusion for a Miller & Thorne and despite the size of Moss & Sabbatelli they didn't have any convincing near falls across almost ten minutes of wrestling. In the Quarter Finals, TM-61 will face either Team Aries or Niko Bogojevic & Tucker Knight. 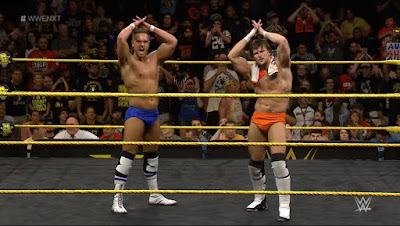