The nights might be drawing in, but that doesn't mean we can't still get Ready for the Weekend! This week we kick things off in Glasgow on Friday as Glasgow Pro Wrestling Asylum host the sixth edition of A Night in The Asylum, head down south for the first night of International Pro Wrestling: United Kingdom's Super 8 2016 on Saturday before finishing off back in Glasgow as Insane Championship Wrestling presents a Fight Club Taping.

Not near Glasgow or Kent, don't worry we've got a couple of alternatives for each day!

Friday starts the wrestling weekend with Glasgow Pro Wrestling Asylum's latest event in Glasgow. Once again, the young stars of GPWA will be mixing it up in the squared circle with more established names of British Wrestling based north of the border.

That mix is no more evident than in the main event match between the NAK and The Purge. Chris Renfrew and BT Gunn need little introduction. Both skilled as singles competitors, they've even more a threat as a duo and as such have held numerous championships. The Purge are also making a name for themselves with GPWA as a very skilled team who have a very bright future ahead of them. Both teams are known for a hard hitting offence. One thing that the NAK do have that The Purge don't is the PWE Tag Team Championships. That could change though as it's been confirmed that the championship will be defended on Friday for the first time outside of Pro Wrestling Elite. If The Purge were to win, they would become champions of a promotion that they have yet to compete in. A true history making moment itself.

When you speak about big impacts, few people can match Flex Hunter. A genuine Goliath of a man, Hunter has been dominant in his time at GPWA and has went through more than a few of GPWA's stars. His opponent is one of the men who helped to train him but one of Scotland's most decorated stars, Lionheart. Lionheart has faced some of the biggest stars in professional wrestling but only a few of those could match Flex Hunter for his sheer size and power. Lionheart has a lot more experience in the ring than Hunter and that experience will be vital to defeat a man who has destroyed many men who have stood before him.

Over a number of months, Molly Spartan and Kasey have been exchanging blows and victories over each other. Neither seems to become a definitive winner between the two. The next chapter of their feud will happen this Friday when both women bring a partner for some tag team action. Spartan has brought in an unknown factor in the shape of Jokey. Little is known about Jokey other than she is from Italy. Kasey on the other hand has went with a partner who is probably one of the best known females today, Viper. A champion on numerous occassions, Viper is world travelled and has as much experience as she does power. Picking a winning team in this match isn't easy. It's really a case of experience against the unknown.

GPWA's event will also see Stevie Boy in action against Ravie Davie while The Sam Barbour Experience shall be facing Kez Evans. Barbour's tag team partner, C.S Rose will also be competing this Friday when he faces Jack Dillon. The final match of the card will see the very unique Iriving Garrett in the ring with the current ICW World Heavyweight Champion, Wolfgang.

HOPE Wrestling Evolution 39: The Past Is Only The Future With The Lights On
Mansfield, Nottinghamshire
Feat - The Boogeyman v T-Bone
Tickets Available - From £7 per person 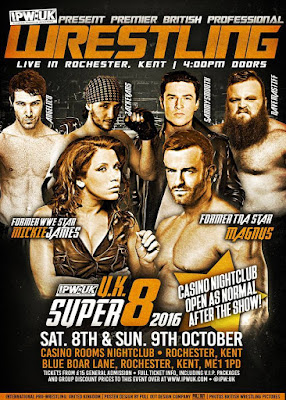 On Saturday, International Pro Wrestling: United Kingdom brings the third incarnation of the UK Super 8 tournament to Casino Rooms in Rochester, Kent, as they present one of the most eclectic line up an eight man tournament can really hope for. Who will follow in the footsteps of Zack Sabre Jr and Rampage Brown? Let's take a look at some of the front runners.

It seems strange to place a man who hasn't been appearing regularly for IPW:UK this year as the favourite, especially considering he hasn't won in the promotion since June 2015, but quite simply anytime Dave Mastiff steps into a ring he has to be considered a favourite. Mastiff's sheer power, experience and endurance make him a match for pretty much anyone in the world. He's won the VPW Heavyweight Title Tournament in 2015, the BCC Title Tournament in 2010 and the RQW Tag Team Title Tournament in 2007, whilst his title reigns this year in VPW and PCW are only the tip of the ice berg for his reigns on top of various promotions. In 2014, Mastiff reached the semi-finals of UK Super 8, losing to the eventual winner, Zack Sabre Jr, he'll be looking to go one further this year and make the final and perhaps win the whole thing! Mastiff's Quarter Final opponent will be a man he is no stranger to, as he clashes with old FCP rival, Clint Margera, in what could prove to be one of the most brutal encounters of the entire weekend!

Another man who must be considered on favourite, despite a lengthy absense from IPW:UK, is Magnus, who will be returning after an almost two year absense. Magnus has proven ability in that ring and has shown in the past that he's willing to do whatever it takes to get to the top of the business, as was clear during his rise to the top of TNA in 2013. It was there where he gained his tournament pedigree winning a TNA World Tag Team Title #1 Contender's Tournament with Desmond Wolfe in 2010, Championship Challenge Tournament and Wild Card Tag Team Tournament with Samoa Joe in 2011 and TNA World Heavyweight Title Tournament in 2013. Of course, more recently Magnus has been holding onto GFW's Global Championship, recently defending the strap on a brutal tour of Canada. As the most recognisable name in the tournament, he'll have something to prove on Saturday when he steps in the ring with Big Grizzly for the first time.

Since debuting in IPW:UK last August, Chris Brookes has only lost one match, one match to someone has almost certainly had the best year of his career, Chris Hero. So, Brookes has to be considered a major contender heading into UK Super 8. Brookes has proven tournament calibre, winning FCP's Infinity Trophy in 2014, Plex Wrestling British Title Tournament and SWA British Lions Tournament in 2015. Outside of IPW:UK, Brookes has found success this year also, reinging as VII Pro's British Lions Champion, whilst also capturing the ATTACK! Tag Team Champion with Kid Lykos on two separate occassions. Brookes has shown in the past that he go with the best in the country, using his techincal knowhow to make a tough opponent for anyone, but he's certainly not afraid to bend the rules when it suits him, something that he may have dig into if he wants to walk away as the winner of UK Super 8. He faces current IPW:UK All England Champion "Smooth" Sammy Smooth in the First Round! 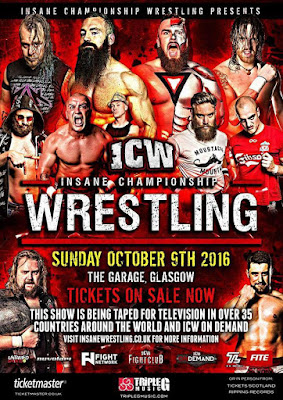 The weekend rounds off on Sunday when Insane Championship Wrestling host another edition of the Fight Club TV tapings at The Garage in Glasgow. It's another packed show with eight matches scheduled to take place.

Two of the matches announced will be qualifying matches for the Stairway To Heaven match for the ICW Zero-G Championship at Fear & Loathing IX. The first match will see Andy Wild face Kenny Williams. Both men are former champions and both have a desire to once again be champion. Williams has been trying to get back in the title picture for months while Wild's last match where he faced Noam Dar in his final ICW appearance, has reinvigorated the former champion. The second qualifying match will see Christopher Saynt face Zack Gibson in a match that shall be the first meeting between the two. Gibson is a no nonsense competitor who is all about business. Whilst Saynt is also a very skilled competitor, he does put on quite a show when he comes to the ring. It's unlikely that Gibson will appreciate that but Saynt will be sure to remind him that he's not just all show without substance.

A few months ago, BT Gunn and Stevie Boy had a match that was supposed to end their dispute. It didn't. Instead those in attendance witnessed both men nearly destroy each other with steel chairs. Their issues are still there and if anything have grown bigger. These two men are going to have another match this Sunday in the hope that they can finally end this battle. However, if they went to the lengths they did last time in almost destroying each other, what will they do this time?

Championship gold will be on the line this Sunday as well as Lionheart will be defending the ICW Zero-G Championship against Lewis Girvan. Girvan has been trying to get a championship match for a while now and finally he will have an opportunity in Glasgow this Sunday. Lionheart was the one who came up with the Stairway To Heaven match and obviously he will expect to be in the match to prove himself as the greatest ICW Zero-G Champion of all time. However, looking past Girvan and his desire to be champion could well result in Lionheart not even getting to the match he created.


Also this Sunday, Joe Coffey takes on Matt Cross in singles action. Tag team action comes in the from of Jack Jester and Kid Fite facing Sha Samuels DCT. ICW World Heavyweight Champion, Wolfgan will be in non-title action when he competes against “Local Hero” Joe Hendry while Hendry' former tag team partner, Davey Blaze shall be in singles competition against Trent Seven.