Another busy week of British and Irish wrestling is ahead of us, this week we take a look at Target Wrestling in Annan, Dumfries and Galloway on Friday, before jumping over to Wexford, Ireland as Over The Top Wrestling take over Spiegeltent Festival on Saturday and rounding off in Manchester as PROGRESS Wrestling present Chapter 37: A Sudden Sense of Liberty. So without further ado it's time to get Ready For The Weekend!

If none of those are near you or you're just looking for more, we've got alternative shows in highlighted also. Including shows in Armadale, Aylesbury, Aberdeen, Bury, Glasgow and Newport! 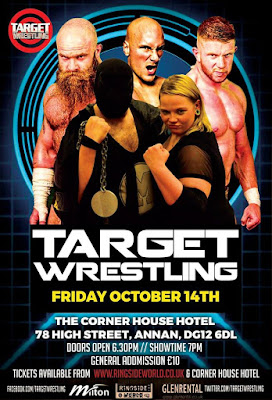 Friday kicks things off with Target Wrestling heading back to Annan and The Corner House Hotel. This show marks the first of two events over the weekend for Target Wrestling with them heading to Carlisle the following night.

In Carlisle, Shady Nattrass is scheduled to defend the Target Wrestling High Octane Division Championship against DCT. However, Natrass might not even make it to Carlisle as champion as he'll be facing Martin Kirby this Friday. Kirby has been close to championship gold in TW as well as being a multi-time champion all over the UK. Could Kirby finally win TW gold or will Nattrass be successful in his first championship defense of the weekend?

This Friday will see Annan's own Ivy Mist back in action in TW where she will be teaming up with former TW Champion; Medallion to face former TW Tag Team Champions; Havok & Karnage. Mist and Medallion have teamed before and had success doing so, but this will be their toughest challenge against former champions. Mist will have the backing of the crowd this Friday, however if the pressure of being in front of home town fans takes over, it may not be the homecoming she so desires.

In the past, Alexander Henry, Spyda, Benny Munroe and Luke Rose have all crossed paths with each other. This Friday they'll all be meeting in the ring in a fatal four-way match. Some have wins over others, some don't like each other. Regardless of who likes who and who doesn't, only one person is walking of of this match as the winner. We might see alliances form but no alliance can win this match. It can only be one man. The one who fights the hardest for it.


Other matches on the show shall see “The Primate” Jason Prime taking on The Coyote Kid for the first time while Ryan Hunter and Ben Vicious shall be competing against each other in singles action.

On Saturday, Over The Top Wrestling make their debut in Wexford for a show at Spiegeltent Festival.

Kimber Lee makes her first appearance for OTT, as she takes on Martina. Lee has proven to be one of the toughest competitors in Independent wrestling, female or otherwise, even reigning as CHIKARA's Grand Champion earlier this year, even succesfully defending the title against Nixon Newell in Wales. Yet on Saturday she may very well be at a disadvantage, not only because of the unfamiliar surroundings in her first match in Ireland, but also due to Martina being a little bit unpredictable. Even though she reigned a top of CHIKARA's gang of ragamuffins and oddballs for almost six months, Lee may never come into contact with a wrestler like Martina and that might just give the upcomer the edge over the much more experienced Lee. Whatever the outcome, expect plenty of shenanigans and some great action.

Hubba Bubba Lucha explodes? Quite possibly as Bubblegum debuts in OTT to take on a man he's very familiar with, El Ligero. This pair have battle each other, teamed with each other and just about everything in between all over the UK and into Europe for over ten years and on Saturday that level of experience and familiarity comes to Spiegeltent Festival. Both are known to favour a high-flying and pacy style, so this one could very well be fought and won above the ring. Ligero struggled during his previous trip to OTT, so he'll be looking to put the demons of dual loses to Pete Dunne to bed, whilst Bubblegum will be looking to make a big impact on the company in Wexford. Either way, this match may steal the show!

At the other end of the scale, Dave Mastiff is returning to OTT for the first time in over a year to take on a performer who will be looking to put himself in the conversion over Pete Dunne's No Limits Championship. Garrett has had a number of successes since debuting at the start of 2016, thanks to his sheer power and impressive speed for a 225 lb man, but in Mastiff he may have some who can match him for power and will work hard to keep Garrett from being able to break into a high gear and use his pace. The Bastard will be looking to show OTT what they've been missing out on over the last year and defeating one of the companies top contenders would definitely send out the right message. Mastiff and Garrett will give their all to get one over the other and you'll have to be in Wexford on Saturday night to find out who comes out victorious. 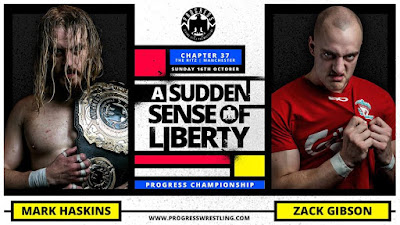 After holding their biggest show to date in September, but not one to sit on their laurels, PROGRESS Wrestling holds their final Manchester event in 2016, with Chapter 37: A Sudden Sense of Liberty.

After British Strong Style (Pete Dunne & Trent Seven) won the Tag Team Championship in September, three teams will be looking to get their head above the water and begin to stake a claim for a shot at the new men at the top of the division. FSU (Eddie Dennis & Mark Andrews) are perhaps the most popular tag team in the company, getting insane reactions whenever Andrew WK's Party Hard hits. However, their 2016 hasn't been a vintage year, at least in terms of victories, as they unsuccessfully challenged for the Tag Team titles on two occasions. The team that was champions at that time, The Origin, will be represented by El Ligero and Dave Mastiff. Perhaps surprisingly this is the first time they will be teaming as a pair, but with plenty of big match experience they'll be difficult to beat, even without Zack Gibson and Nathan Cruz at ringside. The wild card in this match has to be The South Pacific Power Trip (TK Cooper & Travis Banks) as whilst they're still a relatively knew team in PROGRESS, they've impressed in their first few matches and remain undefeated. If Dahlia Black is at ringside they may well cause an upset. Three teams and six competitors will make for pacy scramble of a match, but who walks out with the win is anyone's guess!

In another bout involving a lot of variables, Pete Dunne, Joe Coffey, Shane Strickland and Marty Scurll will go to battle for a shot at the World Championship, currently held by Mark Haskins. Just take a look at that line up, it's perhaps the most diverse four way ever. Dunne won the Tag Team Championship and has impressed enough since creating British Strong Style with Trent Seven to get a place in this four way. With Seven by his side, Dunne will do anything he can to earn a title shot and the chance to be a joint champion. Joe Coffey was unsuccessful in his quest to become the first ever Atlas Champion, but had previously blazed his way to the final with victories over the likes of Dave Mastiff, Michael Dante and Mikey Whiplash. Coffey is easily the most powerful man in the contest and will be looking to use that power to turn the negative of losing the Atlas tournament into a positive. 2 time CZW Wired Champion is still a newcomer to PROGRESS, but after defeating former World Champion Will Ospreay in August, he find himself with this big chance. Strickland is the quickest of the competitor, so will be hoping to win this one in the sky. The final participant, Scurll lost the World title in Brixton, but with PROGRESS offering no automatic rematches, he'll have to earn himself a chance here. The Villain has shown that he's obsessed with the title in the past, so who knows what he'll do in order to get the belt back in his possession. Dunne, Strickland, Coffey and Scurll all have what it takes and all four have incredibly different styles, this should lead to absolute classic in Manchester.

After defeating Marty Scurll and Tommy End just three weeks ago, Mark Haskins will have his work cut out for him when he puts the belt on the line for the first time against The Origin's Zack Gibson. Gibson hasn't been in the best of form since reaching the Semi-Finals of Super Strong Style 16 in May, but managing to pin Jack Gallagher in his final match before leaving for WWE, as well as keeping The Origin from disbanding, has seen him catapulted into a title match. This could be a master class in submission wrestling as both are known to favour specific arm-based holds, but their similarities end there as Haskins is adored by the audience, whilst only Donald Trump seems capable of getting more heat than Gibson at this point in time.  The Star Attraction won their first encounter in January, so will be hoping for a repeat, but there's more than a possibility that Gibson could play spoiler and make sure that Haskins title reign is over before it begins.

Rounding out the show, Rampage Brown faces the unknown as he puts his Atlas Championship on the line in an Open Challenge, Kimber Lee faces Kay Lee Ray, James Drake takes on Fabian Aichner and Bubblegum returns to PROGRESS for a match with Chuck Mambo.

Sold Out - Re-sale Tickets Available - From £10 per person