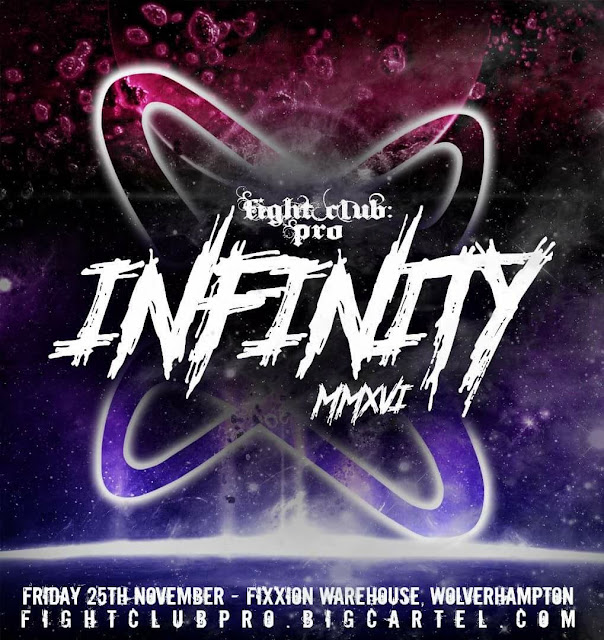 On 25th November, Fight Club: Pro returned to Fixxion Warehouse in Wolverhampton for their sixth annual Infinity Tournament. This year's tournament featured Joe Coffey, Trent Seven, Jimmy Havoc, Tyler Bate, Mikey Whiplash, Travis Banks, Chris Brookes and Omari doing battle in two Four Way dances, before the final, all for the opportunity to challenge for Pete Dunne's FCP Championship in 2017. With a line-up like that, how could things possibly go wrong? 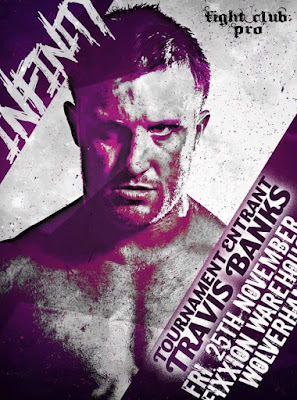 In a slight departure from the norm, I'm going to talk through the Infinity tournament in order, beginning with the first Four Way Dance which saw Trent Seven earn a place in the final after successfully outlasting Joe Coffey, Mikey Whiplash and Omari in a well-crafted encounter. This bout went through a number of different sections, with a feeling that everyone involved came out of the match better off for having been involved. The shining example of this would have to be Omari, who stepped up in almost every area of his game. The back and forth scuffle with Coffey, including getting a strong near fall off his modified lifting reverse STO, as well trading strikes with Seven, showed just how capable the trainee could be. The encounter built towards a final showdown between Seven and Whiplash, after some enjoyable three way violence involving Coffey, with the duo adding another chapter to a feud that has been all over the country in 2016. It was the classic Mikey and Trent japes that we've come to expect and love with the pair tearing strips from each other before Seven advanced with a spectacular mid-rope piledriver.

Match in a Sentence - Three strong-style veterans battering each other, whilst Omari raises his game once again.

The second four way dance saw Travis Banks collected his first win ever in FCP, with Jimmy Havoc, Tyler Bate and Chris Brookes providing stiff competition in a story-telling thrill-ride that had the crowd hook for the duration. This was a very different affair from the first with Brookes being a general annoyance to all throughout the early part of the bout, leading to an angle that could produce some gems in 2017. After being eliminated by Havoc, Brookes denied the former PROGRESS World Champion the match, breaking up a pin after Havoc had hit both Banks and Bate with Acid Rainmakers. The resulting brawl was full of fury as Brookes was thrown into anything and everything as the crowd celebrated by serenading Brookes with "Fuck off back to Tipton" in the most joyous of ways. With old rivals Bate and Banks left in the ring, the atmosphere was unreal in Fixxion Warehouse. With every movement the duo had the crowd exactly where they needed to be and put on a great final stretch of action and despite Bate's popularity, it was the Kiwi that had the ground swell of support. The reaction when Banks finally managed to put Bate away resulted in near pandemonium and lead to me simply writing "BANKS WINS! BANKS WINS! BANKS WINS!" in my note book.

The final pitted two of Fixxion Warehouse's favourite against one another as Travis Banks and Trent Seven battled for the Infinity trophy, in front of an emotionally invested audience, who desperately wanted Banks to claim the trophy, after a turbulent year. If the crowd had been into the two semi finals, they rallied for the main event and created one of the best atmospheres that I've been apart of all year. The audience was gripped by Banks' quest and the man who'd been struggling all year suddenly had a ground swell of momentum, so much so that regular top protagonist Seven found himself in an unfamiliar situation (at least in FCP) of not having 100% of the audience behind him. From the moment Banks hit a brainbuster to kick off the match with a near fall, this match took me on a rollercoaster of emotions in a way that only wrestling can do and from the reactions of those around me and all over the building pretty much everyone felt the same.

The pair had had a cracking contest at Rise Against in March, but this was a cut above, bringing all the elements that made that match what it was, with added intensity and almost a years worth of storytelling behind it. This was a real fight of a match, as both laid their strikes in hard, scrapping initially on the outside following a tasty suicide dive from Banks. Where the bout came into it's own was in a string of near falls, aided by both men selling the damage of the fight when necessary and good timing, whilst having a crowd completely consumed by every single movement and caring about the result of the match is never going to hinder things. The bout only got more exciting as things went on, with silly things like kicking out of and no-selling piledrivers only managing to add to the excitement. There's a time and place for that kind of stuff and this was the time and it was definitely the place. Beyond Banks pulling out the victory, the highlight of the bout for me was the time that Banks spent in a single leg Boston Crab, as it was almost agonising to watch with the sinking feeling that the hero might fall short once again increasing as he was dragged back to the centre of the ring. This was one of the most emotional and gripping contests I've watched all year. The first chapter of the Travis Banks comeback in Fight Club: Pro story had the happy ending it deserved at the time it needed it, I can't help but get excited about what the next chapter could bring!

Match in a Sentence - Excellent, everything I'd wanted and more. 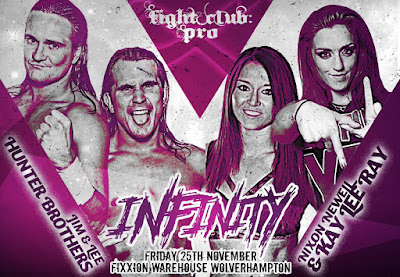 The highlight of the non-tournament action came in Kay Lee Ray and Nixon Newell's victory over The Hunter Brothers 2.0 (Lee Hunter and Young Lee Hunter (Drew Parker, subbing for an injured Jim)). This was brimming with hijinks and shenanigans, with both trying to pull off "twin magic" to varying degrees of success and referee Shay Purser just being generally confused by everything and eventually kissing Parker, to the jubilation of all. The japes and chicanery were wrapped inside what was actually a bloody good tag team match, with the New Hunters slipping into the pseudo antagonist role early on as Newell and KLR brought the fire, in a match that was packed with tag team clichés done well and with gusto. The closing section was home to a number of convincing near falls, like Newell's Vulture Culture Destroyer and despite a little mix up towards the end, the bout finished well with Parker taking all the moves before taking the pin. It was different from what I'd been expecting had Jim been able to take part, but Parker was a great replacement who brought a new dimension and ended up bringing a real dynamic strength to proceedings.

Match in a Sentence - A very good tag bout, with some Attack! style shenanigans.

Dan Moloney continued his strong post-Facesmashers streak as he went over the debuting Professional Wrestling Alliance (Sydney, Australia) wrestler Sean Kustom. The wrestling here was full on and packed with big strikes that drove the conflict inside the ropes. Outside of the ring, Moloney's footwear challenges continued as the crowd found the Roderick Strong hymn book once again. Moloney rode the storm well, playing up to the festivities perfectly, even when a pair of babies booties somehow made their way into the ring. Outside of the brogue nightmares, the Superbeast really grew into this one with the unfamiliar Kustom quickly gaining some quick crowd support thanks to some hard as fuck slaps and kicks and having regular sized boots. Moloney wound up picking up another strong win with his spinning sitout powerbomb making him undefeated since splitting with Wild Boar. 2017 may very well be the year of the Superbeast. The shoes thing really did take over my entire being at one point, the wrestling was strong, but when you've been broken, you've been broken, so this is one match that I'd like to rewatch, just to pick up on what I missed whilst in fits of laughter.

The opener provided a pair of FCP debuts, with Johnny T picking up a victory over Adam Cage with both men accounting for themselves well.The two worked a familiar style with lots of big strikes, with simple dynamic and story. Despite the FCP audience being a mostly respectful bunch, it can still be a difficult place to debut, because that crowd has seen a lot of world class action over the years, so credit to both Johnny T and Cage for coming out and putting on a watchable encounter, in front of an audience that was unaware of them. Whilst there was nothing to get overly excited about, it got the crowd settled for the rest of the show, with both newbies showing potential.

Match in a Sentence - A good introduction, but struggled to stand out. 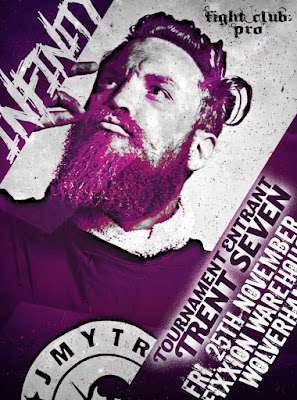 Oooft, what an evening at the graps this was! The Infinity tournament was probably my favourite thing of the entire year, in Fight Club: Pro or anywhere. The build of Travis Banks throughout the year has been 100% perfect and whilst I'd initially fantasy booked something completely different, this was without doubt the right time to pull the trigger on a talent who has exploded in 2016. The supporting bouts were a lot of fun, with the tag match standing out for its unique use of the art form. Perhaps the opener held the show back in terms of its ATPW Scale Rating, but it will only help both Johnny T and Adam Cage to have appeared on the show and hopefully we'll get to see them both again as they grow and grow, as that's always a special thing for a fan to witness.