On 31st December, World of Sport Wrestling made it's return to ITV, with a one-off two hour special. The show was structured around qualifiers for a battle royal that would crown a new #1 contender, after Dave Mastiff won the promotions belt under suspect circumstances against Grado in the opener. This was highlighted by a tag team clash where The Coffey Brothers (Joe Coffey & Mark Coffey) faced off with Ashton Smith & Rampage Brown. With the likes of Johnny Moss, Viper, CJ Banks, Zack Gibson and El Ligero also in action, would the special lay the foundation for a World of Sport return? Let's take a look. 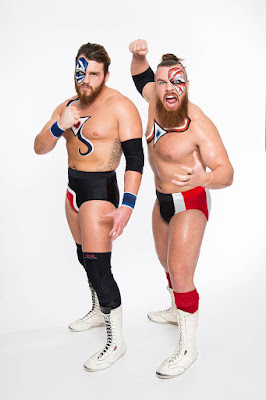 The show's lone tag team contest produced some of the best action across the two hours as The Coffey Brothers advanced to the #1 Contender's battle royal with a victory over Ashton Smith and Rampage Brown. This match didn't exactly re-invent the wheel, but it didn't have to, taking the regular tag team structure and filling it out with strong believable performances from all four and some bloody good wrestling also. The two tandems dispositions and chemistry were put over well, with the big man/small man dynamic of Smith and Brown working much better than I had expected, considering they worked the villain role. The build towards the hot tag was exciting, with Mark getting a nice inside cradle near fall, before the tag to Joe got a pleasing pop from the audience. Everything from that point onward was spot on, with each team getting a good near fall in, including a very well worked distraction false finish off a Brown spinebuster, before heel miscommunication resulted in Smith taking a forearm and lariat combo for the pin.

Match in a Sentence - A very good, simple tag structure, fleshed out by strong performances all round.

The strongest match was a cracking technical outing, that saw "The Mexican Sensation" El Ligero defeat Zack Gibson. These two have clashed numerous times over the last five or six years in places like Grand Pro Wrestling and FutureShock Wrestling and that familiarity was on show throughout with some silky smooth grappling as the two told a clear story. Gibson looked for the submission win with his Shankly Gates (Grounded top wrist lock), Ligero was just trying to keep away from the move, doing all his lucha things in search of victory. The match was taken up a notch when Gibson swung Ligero into the announce table, injuring the Mexican's arm and bringing a whole heap of drama to the rest of the match. Ligero sold the injury magnificently, helped by Jim Ross and Alex Shane on commentary, with some slick sequences, like Gibson reversing a second modified wheelbarrow facebuster attempt and locking the Gates, producing some thrilling television. Both men came out of looking like stars, with Gibson coming across as a vicious non-nonsense villain, whilst Ligero picked up the victory with C4L (Springboard Tornado DDT), despite the injury. If WOS Wrestling does get commissioned for a full run, a series of matches between these two has major potential.

Match in a Sentence - A very good wrestling match with a stellar story and well defined characters.

The seven man over-the-top battle royal saw Grado earn a title shot against Dave Mastiff in the show's main event, after he outlasted Johnny Moss, Sha Samuels, surprise entrant Davey Boy Smith Jr (Harry Smith), Mark Coffey, Joe Coffey, El Ligero and Kenny Williams. Whilst it was a shame to see talent like Williams and Ligero leave the match so early, their exits allowed for the unit of Moss and Samuels to built up, considering they were the only two who were yet to be involved in a match. DBSJ's participation was a well kept secret, especially considering the event was taped in November, and while the logic of him getting to enter whenever he pleased was flawed, it did allow for a cool moment when he came to Grado's aid when the Scot was left alone with Moss & Samuels. DBSJ's involvement produced the matches finest action when the former 2 time IWGP Tag Team Champion mixed up with Moss & Samuels with a number of impressive suplexes, before the numbers game caught up with him (Grado was supposedly too star struck to help out). The crowd was hot for the final flurry, with the TNA performer out maneuvering the villainous pair to advance. The post-match attack from Samuels & Moss appeared cut short the sugary sweet conclusion, with paramedics checking over Grado, although this was only putting the inevitable on hold.

Match in a Sentence - A battle royal that worked for the specific needs of the show, featuring a great moment in Davey Boy Smith Jr's entrance.

World of Sport got it's introduction to the Ladder match, with Kenny Williams earning a battle royal spot with a victory over Sam Bailey, CJ Banks and Delicious Danny in a fun affair that built nicely throughout, making the most of it's slender seven minutes run-time. The action might not have always been as crisp as it could have been, the camera team may struggled to keep up with the gimmick and Alex Shane was uncomfortably annoying on commentary, but when the match clicked it produced some lovely stuff, that went above and beyond my expectations of what the lads would be allowed to do. The winner Williams shone throughout with a lighting quick opening flurry, a nice sequence with Danny, as well as taking a German suplex from Banks off the ladder, before battling off all three of his adversaries at the top of a pair of ladders to claim the briefcase. A special mention has to go to Danny's dive off the top of ladder also.

Match in a Sentence - Despite some awkward moment, when it worked it worked very well and produced an entertaining match that stood out from the rest. 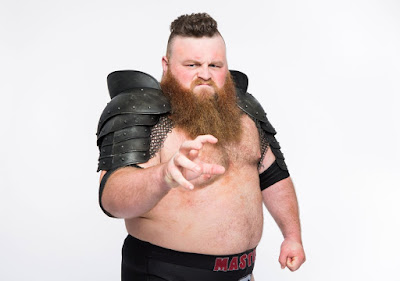 The opening contest saw Dave Mastiff win the World of Sport Championship by defeating Grado, with more than a little help from Johnny Moss and Sha Samuels. This was a solid opening contest that introduced the two characters in the match, the individuals at ringside and the general concept of professional wrestling well. This created an engaging match that was easy to get into, helped by the lively studio audience. With his experience working for TNA, Grado was almost definitely the right man for the role, with his selling in particular being very TV, allowing Mastiff to look like the rough and tough bastard that we know and love to hate. I would have liked to have seen Mastiff have little longer in control, but with the plans for the rest of the show it makes sense that this one would be kept relatively short. The interference finish, that saw Moss push Grado over the top rope, in the very first match bugs me just a little bit, but again with the plans for the show long story, it was almost necessary for things to happen like this.

Match in a Sentence - Introduced the concept and the characters, but wasn't long enough to do much else.


The return of World of Sport Wrestling produced a good television product that had an appeal across a number of age groups. The Coffey Brothers v Rampage Brown & Ashton Smith, as well as El Ligero v Zack Gibson produced the strongest wrestling, but there was a good variety across the card. Some elements of the booking did mean that parts of the show weren't quite suited to their placing on the event, however the ongoing story also managed to give a feel of momentum, leading up to the feel-good victory from Grado to cap off the two hours.

There's certainly potential to make this into a series of hour long episodes, perhaps with more two hour specials, with the ground work already being laid for a number of future stories and matches. More WOS Wrestling, ITV pls.