On 2nd January, WWE aired the first Monday Night RAW of the year from the Amalie Arena in Tampa, Florida, USA. Sami Zayn and Braun Strowman headlined the show with a Last Man Standing match, that appeared to be the culmination of their feud. With the likes of Chris Jericho, Cesaro, General Manager Mick Foley, Seth Rollins and Universal Champion Kevin Owens all featuring in the show, could WWE kick off 2017 in style? Or would that New Year's Day hangover still be around? Let's take a little look. 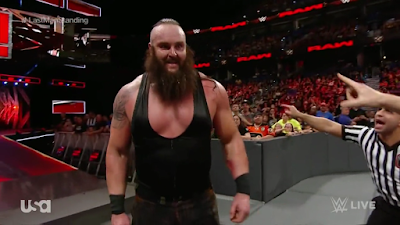 Braun Strowman's Last Man Standing victory over Sami Zayn, produced the most interesting part of the show as the pair had a driven and compelling outing. The match had a sense of urgency from the very beginning, with Zayn using a kendo stick, and the pair managed to keep that going, in part thanks to Zayn's terrific fighting from underneath performance and also because of the believablity of Strowman as an unstoppable, yet frustrated, force. Things were kept interesting by a lot of movement around ringside and into the backstage area, with a good portion of the fight happening on the ramp, with the match using it's one big spot of a crossbody off the stage and through a table form Zayn, as an effective near fall. It was a shame that the Tampa crowd didn't seem to get behind Zayn at any point, as this would have produced a much bigger moment of the finish, as the Underdog from the Underground took repeated punishment, but I can't see what else either guy could have done in this particular bout. I'm still unsure on how far Strowman can go in WWE, because obviously competing with someone like Sami will help to mask some of the inadequacies, but I'm looking forward to seeing if he sinks or swims in 2017.

The show's semi-main saw Roman Reigns manage to retain the United States Championship over Chris Jericho in a solid encounter, with Kevin Owens banned from ringside and the possibility of Reigns losing the title if he was disqualified or counted out. As you'd expect the many gimmicks dominated the story, with Jericho attempted to get Reigns either counted or disqualified. The Eddie Guerrero weapon spot has become a bit of cliche recently and whilst it worked in this situation, it was a little bit lazy to go back to this old classic once again. The set up for the finish was the brightest work in the match, with Jericho able to avoid a handful of spear attempts, but after being unable to win with a Codebreaker and then running into an exposed turnbuckle, Jericho was finally caught off guard. There isn't a whole lot of chemistry between Reigns and Jericho, but they capable of having good matches together in the right situation and that's what we got here.

The show-closer may have been advertised as Goldberg guesting on the new Kevin Owens Show, but Chris Jericho, Paul Heyman, Roman Reigns and Braun Strowman were also involved as the push towards the Royal Rumble was taken up a gear. The initial banter back and forth with Owens and Jericho didn't really work for me, as the scripting was a little on the obvious side and seemed to drag on without offering much that hadn't already been said on the episode, let alone over the last few months. The tease of dissension between the pair was handled well, but the segment didn't really pick up until Goldberg entered and brought a whole heap of energy. Heyman's appearance allowed Brock Lesnar's feud with Goldberg to be kept in the mind, but Reigns and Strowman's involvement gave proceedings a new and potentially interesting twist as the Road to WrestleMania begins to speed up. The double spear from Reigns and Goldberg to Strowman was also a cool moment, even if was majorly signposted by all.

At the other end of the show, General Manager Mick Foley was confronted by Kevin Owens and Chris Jericho, with a number of segments being set up for the rest of the show, as Commissioner Stephanie McMahon also got involved. Setting up the Kevin Owens Show segment as well as Owens v Seth Rollins and Jericho v Roman Reigns for later in the show was pleasing, but at times the conversations were clunky and ultimately pretty unnecessary. Of course, no episode of RAW would be complete without Foley fucking something up as at one point he managed to warn Jericho from interfering in his own match. There was a "shark cage" on the set also, everyone said "shark cage" a lot. The whole affair lack any particular energy or tension and I found myself drifting off from pretty quickly. Everything that was announced here could have been announced before the show or by the commentary team, freeing up almost ten minutes for the rest of the show. 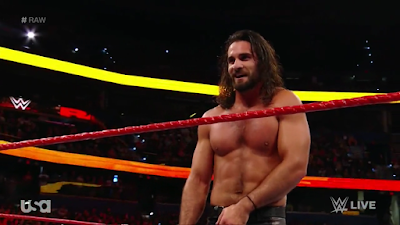 Kevin Owens suffered a disqualification loss to Seth Rollins in the opening match, that meant that the Universal Champion would be banned from ringside for the Chris Jericho v Roman Reigns US title bout later in the show. The two have had good matches in September and October last year, as well as in Ring of Honor in 2010, but this was not one to add to that list. It wasn't that the wrestling was bad, it was just that it wasn't very interesting, especially before the first advert break. Owens missing the cannonball on the outside was a sweet spot, but that moment was pretty much an exception to the rule. I feel like not enough was made of the finish, where Owens purposefully got himself disqualified, meaning he could no longer support his best friend later on in the show. Without telling the story of Owens really not being too fussed about helping out Jericho, the match was left without anything that could be confused with being interesting.

Karl Anderson picked up his first singles victory in WWE, by defeating RAW Tag Team Champion Cesaro in a fun match that saw both Luke Gallows and other RAW Tag Team Champion Sheamus get involved. Cesaro looked great throughout this one, being booked as the superior competitor, whist Anderson was able to take control at numerous points thanks to the outside distractions from Gallows. With Sheamus joining the commentary team, this not only worked to create a decent narrative for this match, but also emphasised the dynamic between the two sides for a potential championship bout down the line. The finish played into this idea more, with Sheamus finally coming to Cesaro's aid and ending up accidentally crotching him on the top rope, with Anderson picking up the win with a diving neckbreaker. The Club haven't exactly lived up to their potential in WWE yet, but if a clash with Sheamus and Cesaro is given enough focus, then we may start to see what Gallows & Anderson can really offer WWE.

New Year, New Day! Big E, Kofi Kingston and Xavier Woods celebrated a brand new year by making copious amounts of sexual references. They revealed they'd be in the Royal Rumble match and talked about "dipping sticks" and stuff of that nature. If you like thinly vieled, mildly rude references then you were supposedly buzzing your tits off for this. Things got a little weird when Titus O'Neil arrived and wanted to join the group. I was pleasantly surprised by how much O'Neil went for this, as he's previously come across as pretty wooden in his promos, but here he showed a charisma that I can't remember seeing from the former WWE Tag Team Champion. The build towards a match between Woods and O'Neil was handled well, with The Real Deal not taking to kindly to not being allowed to join and dropping the ol' weakest link bomb. I'm not sure I'd like to see this go any further, but as a little bit of filler as we head towards the Rumble it was at least entertaining. 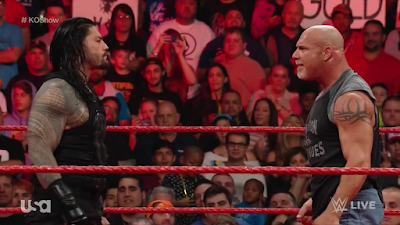 This was an average wrestling show on the whole, with a couple of good matches (Strowman v Zayn, Jericho v Reigns, Cesaro v Anderson), but also with one story taking up way too much air time, leaving the Cruiserweight and Women's division bout to be horrifically undertimed. It was frustrating to see matches that could potentially tear the house down, only given two minutes. Kevin Owens and Chris Jericho's relationship was over exposed, taking up almost fourty minutes of air time and even with Goldberg managing to change things up with a different energy in the final segment it was just too much for me.