On 20th February, WWE hosted the 1239th episode of Monday Night RAW, returning to the Staples Center in Los Angeles, California for the third time in ten months. The show's main event  was a rematch between The Big Show and Braun Strowman, after their first match ended in DQ on 15th February...2016! Cesaro, WWE Universal Champion Kevin Owens, Roman Reigns, Kofi Kingston and Sheamus were also featured on the episode. As the penultimate episode before Fastlane, how would the WWE landscape look as the Road to WrestleMania roared on? 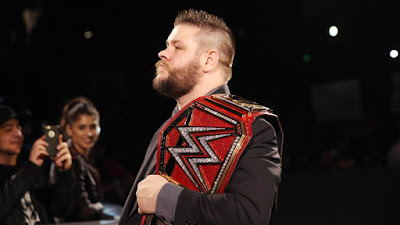 The show began with Kevin Owens sitting in a single spotlight in the middle the ring, holding his Universal Champion. The Prizefighter deliberately kept the focus away from his attack on Chris Jericho on #1238, instead honing in on his title defense against Goldberg on 5th March. The character shift away from his double act with Y2J felt much more fitting a main event act, as he used meticulous delivery and pacing, coming across as aggressive and Machiavellian as he set out the story for the Fastlane match with Goldberg. It was nice to start the show without a cavalcade of entrances and interruptions, keeping things simple with Owens' powerful utterances allowed to have the maximum impact with the minimalist set-up juxtaposing well with the elaborate "Festival of Friendship" segment from last week. 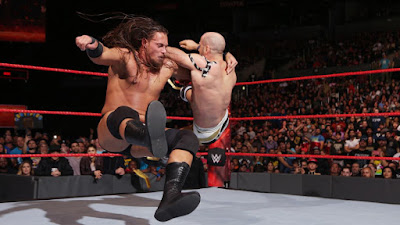 I'm not quite sure what the aim of this tag team match, as the two supposedly babyface tandems struggled to hold my attention, in what was a bit of jumbled opening match. Enzo Amore's character is steadily becoming less and less likeable, with his diatribe becoming monotonous and repetitive as he struggles with the sheer amount of content he has to produce. Having Enzo block Cesaro doing the swing was an odd choice, because of the moves popularity, unless the seeds are being planted for a full heel turn, but with Luke Gallows & Karl Anderson as the current RAW Tag Team Championship that seems unlikely. Following the match, Amore start chattering like a dickhead on the mic, leading to Sheamus getting a pop for kicking his head off with a Brogue Kick. 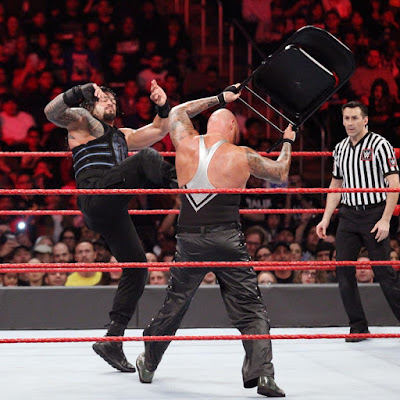 With the RAW tag team division looking threadbare at the moment, I'm not sure I get the logic of having The Club feuding with Roman Reigns, other than to help Reigns pass sometime until WrestleMania. In terms of booking, there was no way for WWE to book this, had they had Anderson & Gallows go over, clean or otherwise, Reigns' momentum heading into Fastlane is halted, had Reigns gone over then the crowd would have absolutely shat on it and your Tag Team Champions look like idiots. The DQ finish, with The Big Dog using the steel chair that the heels had introduced, was probably the best they could do, but the majority of the match was dull. Obviously, Reigns killed Anderson and Gallows post match, including a pretty cool visual of Anderson diving off the top rope into a spear. Personally, I would've prefered to have seen Reigns in a simple squash victory against someone like Bo Dallas or Titus O'Neil, or, if they intent on doing a handicap match, The Shining Stars. 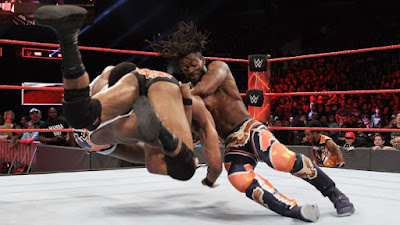 Honestly, I had very little time for this match or the pre-match stuff, but the crowd absolutely loved it. Seriously, Los Angeles lapped up everything and anything that E, Kingston and Woods did. To be fair to the works, the tag match they had wasn't half bad, highlighted for me by Kingston' silly fosbury flop dive over the top rope towards the end. However, the skit before the match was not my cup of tea, as it was revealed that Lana had hacked New Day's tablet to steal their blue-prints for some ice cream...because she's Russian. D'ya get it? Russian? LOL! I groaned, the crowd laughed. The match then concluded with Woods stealing Lana's tablet and smashing it on the steel steps. I groaned, the crowd went nuts. Even if you accept the idea that Lana wants to steal the New Day's ice cream plans, the logic of Woods destroying her tablet would stop her from taking the plans back at a later time is extremely flawed. But hey, RAW is a mainstream three hour show, it's unlikely that the every segment is going to work for anyone person. 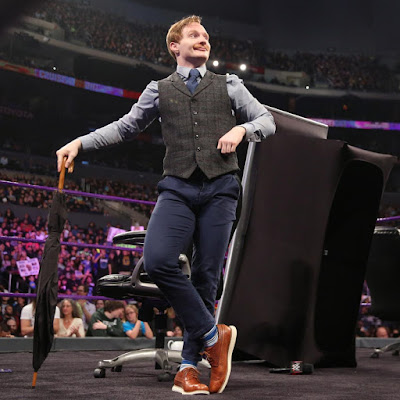 The main segment for the Cruiserweight division was a contract signing for Jack Gallagher's shot at Neville's WWE Cruiserweight Championship at Fastlane, with Austin Aries acting as the host. The two having tea and biscuits was perhaps a little hackneyed, but certainly fits Gallagher's English Gentleman gimmick and he played it the role well throughout this segment. The two characters have good chemistry, and their interplay here was simple, but entertaining, as Neville believes he's what a Englishman really is, going as far as saying that Gallagher doesn't actually exist. The feud between the two is steadily finding it's feet and has arguably grabbed the attention of the audience more than anything that the 205 Live brand has done and by the time Gallagher planted Neville with a headbutt it seemed like the majority of the Staples Center was sold on both guys. Good work lads. 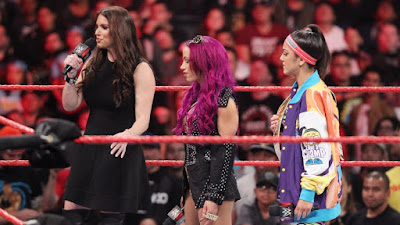 One of the lengthiest segments on the show began with RAW Commissioner Stephanie McMahon attempting to get RAW Women's Champion Bayley to relinquish her title, because of "tainted victory" last week, because of Sasha Banks's interference. Despite beginning with promo where Bayley seemed to be struggling to remember her scripted lines, this segment only worked because of Bayley's do-gooder character and her body languange and facial expression making it seem like she was about to hand the belt back to McMahon. I honestly wouldn't have been surprised to have seen Bayley drop the title like this and perhaps it would have made sense of spunking away her first title win on TV. That didn't happen and after Charlotte Flair had announced she'd be invoking her rematch clause on 5th March, with Banks then coming out a challenging Flair to their 16th televised (56th including house shows) singles match. 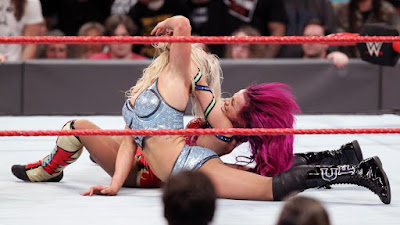 This was at the lower end of Banks v Flair matches, coming nowhere close to their matches on NXT Live, NXT Takeover: R-Evolution or Monday Night RAW #1209, but this was still a decent outing for a thrown together television. Thrown together is probably the best phrase to describe the feeling I got when watching the match, as there seemed to be a lot of orphan ideas in the match, like Flair focusing her attack on Banks' previously injured knee, where nothing stuck around long enough to fully build a narrative. The action was solid throughout though, with Flair and Banks almost sleeping through a number of nice sequence and Flair continuing to own her bruising cocky heel role. The highlight of the entire match for me was when the show came back from the break, with the match in progress and the two were just tearing strips off each other. Having Flair lose two weeks before getting a title shot was dumb, but arguably Flair's PPV streak gimmick is strong enough that losing on television won't hurt her and sets the wheels in motion for a multi-person match at WrestleMania, after Flair wins the belt back at Fastlane. 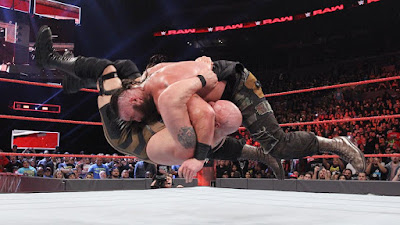 It was past 4am when this match started, I was tired and nowhere near interested in what Strowman and Show had to offer, especially after Strowman's match with Mark Henry on #1239. Therefore, the fact that I was almost glued to the screen by the end of the match is a massive endorsement for the hard work that both men put into making this contest. This was Strowman's best singles match to date, as well as the best non-gimmick match that Show has done in the past five years (dating back to his match with Sheamus at Hell in a Cell 2012) The two doing some chain wrestling at the start was a little weird, but credit to the big lads for trying something different and building the match from the bottom up, certainly aided by how much Los Angeles was up for two near 400lbs scrapping about in a supposedly "re-enforced" ring. The contest moved towards a series of near falls, with Strowman kicking out of a chokeslam and a knockout punch and most surprisingly Show kicked out of slightly awkward running powerslam. The win will give Strowman momentum among the casual fan, whilst the strength of the contest should begin to endear him to the more hardcore audience also. Good work. Reigns running in at the end was unnecessary as Strowman hadn't really done anything to warrant it and The Big Dog got punk'd anyway. 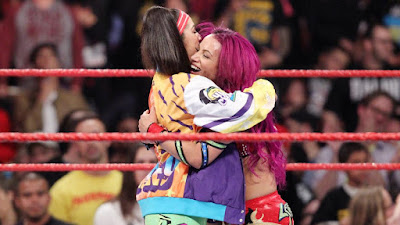 Show in a Sentence: Strong opening, strong main event, everything else was at best average and/or a little too brief.