On 22nd February, WWE aired the 236th episode of NXT, taped at Full Sail University in Winter Park, Florida on 1st February. This week's episode was main evented by NXT Champion Bobby Roode facing off with No Way Jose in Non-title action, before Kassius Ohno [Chris Hero] made his triumphant return whilst Pete Dunne, Ember Moon [Athena], Mark Andrews, Peyton Royce and Liv Morgan were also featured. How did it all go down and was it any good? Let's take a look. 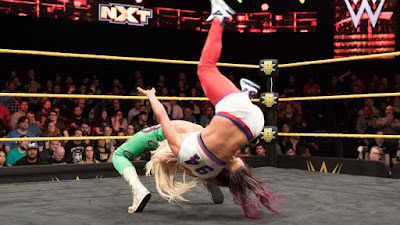 A real solid television three way here, as Peyton Royce (with some wonderful dummy work by Billie Kay [Jessie McKay]) earned herself a shot as Asuka's Women's Championship. Having Kay on the outside gave the match a tidy dynamic and drove the contests narrative, as after an explosive opening, including a slingshot crossbody from Moon, Royce was able to control with help from The Femme Fatale on the outside. Once The Venus Fly Trap started running things, the match was mostly one in, one out, which is where the trio could have been afforded more time to develop, as whilst we got a nice tower of doom spot, I would've liked to have seen the three show a little more creativity to take things to the next level. The finish protected Moon for a potential title challenge down the line, as after The NXT War Goddess had dispatched of an interfering Kay with an Eclipse, Royce sent Moon tumbling to outside, before Morgan took the pin off a Bridging Fisherman's Suplex. 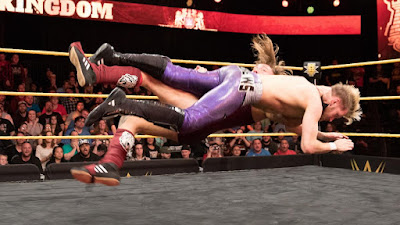 Since 2011, Pete Dunne and Mark Andrews have faced off in ATTACK! Pro Wrestling, Pro Evolution Wrestling, Combat Sports Federation, Absolute Intense Wrestling, Pro Wrestling eXpress, Tidal Championship Wrestling, Pro Wrestling Kingdom, Over The Top Wrestling, Pro Wrestling Guerrilla and the WWE United Kingdom Championship tournament and now they've finally made it to NXT and they did not disappoint. This was two of the best professional wrestlers anywhere on the planet right now, getting ten minutes to showcase their greatest hits to a worldwide audience. Some of the things these guys can do in the ring are quite frankly unbelievable, they're so comfortable and snug, fluid but solid, but their slick transitions, flash near falls and constant feeling of build and momentum weren't my favourite parts of the match. The things that I absolutely adored, and the things that make both stand out from an already impressive pool of UK talent, were all in the little touches and added details. Andrews sold his arm wonderfully after getting forearmed in the steel steps and taking taking an X-Plex on the apron, whilst Dunne's facial expressions throughout were the sort of gritty, angry and bitter visuals that will make him so easy to hate. After Tyler Bate and Trent Seven tore it up last week, Pete Dunne and Mark Andrews delivered and then some here. 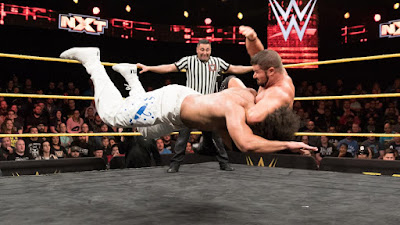 Kassius Ohno is back! The former PWG World Champion made his first appearance on NXT since losing to Alexander Rusev on #78 (Aired 12/12/2013), to make the save for No Way Jose, after a post-match assault from Bobby Roode. Obviously, the return wasn't as impactful as it could've been and why Ohno gives a shit about Jose is unknown, but KASSIUS OHNO IS BACK BABY! The bout itself wasn't a particularly good match and it's certainly not a match that I'd go back and watch again, but it the duo did their particularly jobs well, with Roode looking like a dominant champion, whilst Jose played the fiery underdog rookie role fairly well. It was lovely to see the Full Sail Crowd getting behind the Domincan as he battled against a bruising Roode and whilst the 2 time TNA World Heavyweight Champion still had plenty of crowd support of his own, because he's GLORIOUS, the tide did seem to be turning towards the more home grown talent towards the end of the match. The finish was a clever piece of business, with it looking like Jose might pull out the upset, as he caught Roode his Fastball punch as The It Factor came off the top, only for Roode to roll to the outside and nail a Glorious DDT as soon as Jose got him back in the ring. Jose was protected in his defeat, but Roode's character and run at the top was enhanced. 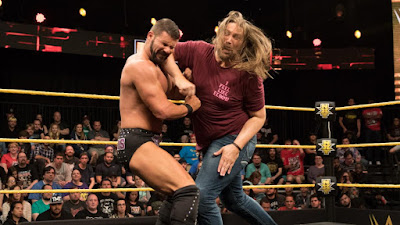 Show in a Sentence - Two good matches and one very good match (Dunne v Andrews), one of the strongest regular episodes of NXT in a while.