On 21st February, WWE Smackdown emanated from the Citizen Business Bank Arena in Ontario, California, USA for the fourth time. This episode focused on a Battle Royal to determine who would challenge Bray Wyatt for the WWE Championship at WrestleMania 33 after Royal Rumble winner, Randy Orton refused to face his Wyatt Family cohort at the Show of Shows. John Cena, AJ Styles, The Miz, Dean Ambrose, Luke Harper, Baron Corbin, Apollo Crews, Kalisto and Mojo Rawley were the chosen ten for the main event, whilst Daniel Bryan, Natalya, Nikki Bella, Becky Lynch and Maryse were also featured heavily on the episode. In the build where The Shield had a Smackdown classic with Christian, Daniel Bryan and Sheamus in February 2014, how would the brand do this time around? Let's take a look. 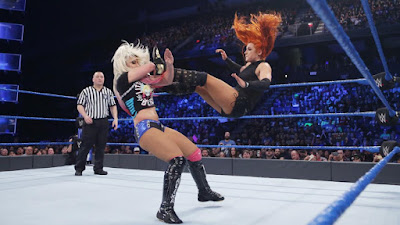 The episode kicked off with an emotional moment for WWE Smackdown Women's Champion Naomi, as she was forced to drop the title by General Manager Daniel Bryan, because of injury. It was odd to see WWE bring back the "30 day rule", but the segment itself was compelling, with the fact that the sympathetic Bryan had had to drop two titles due to injury only a few years ago adding depth to the moment. Whilst I'm not a massive Naomi fan, her promo when handing the title back was believable delivered and left a few doors open for her return later down the line. Bryan throwing together a match for the title after Alexa Bliss' interruption was a disappointment, as with so many episodes to fill between now and WrestleMania on 2nd April and a strong Women's division, it would have been much more satisfying to see them competing in a tournament for the title. Plus, Bliss' opponent Becky Lynch had suffered a loss to Mickie James last week, so it's debatable that she hadn't earned her place in the opening match for the vacant championship.

A decent opener here, with a hot Ontario crowd getting behind Lynch from the start. The duo seem to have a good understanding in the ring and this resulted in some lovely technical wrestling to begin with the pair trading holds back and forth, in a slick sequence. I would've liked to have seen this match really break into the next gear, as whilst Lynch and Bliss have been feuding for a while they are yet to have a definitive, must-see match, that I am pretty sure they are capable of if allowed enough time and pushed hard enough. In the end we got a near fall off an Exploder suplex for Lynch, a little bit of submission based action, before Bliss nailed The Lass Kicker in the throat and grabbed a handful of tights to reclaim the belt she dropped at Elimination Chamber. I'm interested to see how Smackdown's plans heading into WrestleMania will have to be altered with Naomi absent and who from the division has to step up. 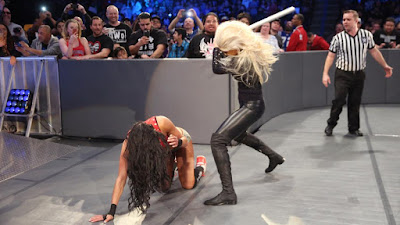 Arguably, Nikki Bella and Natalya pulled out the best match of the show as they brawled all through the arena and didn't hold back in what a lively scrap. It was cool to see the women like Bella and Natalya, who have been with WWE for almost ten years, getting the opportunity to work a match-type that was almost exclusive to their male counterparts even two years ago. They easily could have rested on their laurels and walked through a match with a couple of weapons spots, but the two really went for it here, starting with kendo stick shots and building to an exciting backstage brawl that peaked with Natalya being shoved face first through a mirror. There's was always a sense that the pair absolutely detested each other, producing some very watchable television. The submission the pair used on the ramp emphasised their distaste for each other perfectly. The finish involved Maryse attacking Bella with a pole, after Bella had been pushed into her backstage, looked to be setting up the rumoured mixed tag match involved the pairs husbands, whilst also giving Natalya some momentum to head into whatever is next for the Queen of Black Harts. There could have been a more satisfying finish that rounded the feud off smoother, but on the whole I didn't have too many issues with the run-in. 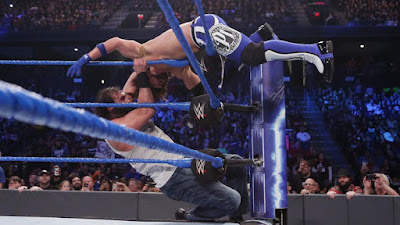 So, the show concluded with AJ Styles and Luke Harper supposedly both ending up touching the floor at the same time, with Daniel Bryan then putting them in a singles match at #915. There were a couple of issues with how this was done for me, but there were also some positives. Because I'm a mardy bastard let's start with the negatives. The spot that saw both guys hit the floor was ridiculous over-complicated, as Harper attempted to essentially suplex Styles over the turnbuckle, leading to both men hitting the floor. The complicated and risky nature of the spot meant that clearly Styles' feet hit the floor before Harper's and therefore WWE didn't show any replays of the spot in between it happening and the end of the show. My other issue with it, was just how cheated the Ontario crowd was of having seen a #1 Contender for the biggest show of the year crowned, and they clearly weren't happy with that. However, with WWE have five more episode's of Smackdown Live to fill with content, so extended stories that could have been played out over a shorter timespan is almost necessary. It could produce more of a buzz and hopefully created stronger, storyline with increased depth. The next few week's will reveal all.

The rest of the match took a while to get going, struggling to break out of your generic battle royal gubbins before the first advert break. On the opposite side of the break the majority of the eliminations were used to begin or further storylines, with Dolph Ziggler attacking both Kalisto and Apollo Crews with a chair after being dumped out by Crews, Baron Corbin planting Dean Ambrose with an End of Days on the floor after being eliminated by The Lunatic Fringe and The Miz returning to dump John Cena over the top rope after being eliminated by the 16 time World Champion. Despite a couple of nice sequences that took advantage of the bodies and talent pool in the ring, there was definitely a certain familiarity to the way each of those stories played out, which gave the match an overbearing repetitiveness. If the ending had been a product of creativity when something simple would have been just as effective, the bulk of the match lacked creativity, rarely venturing outside of it's comfort zone.

Show in a Sentence - Some stuff overcooked, some stuff undercooked, not a lot in between.