Ain't No Party Like a Dan Severn Party - Your Guide to WrestleMania and Beyond.

Bayley had a great line on Raw the other night, one that once again underscored her relatability to us die-hard fans, when she confessed that WrestleMania was her favourite day of the year. For me, Mania is right up there with the first day of the football season and Christmas: it evokes an energy and excitement that is palpable. And listen, I reckon that deep down all wrestling fans feel this way: from the markiest of marks to the smarkiest of smarks, we can all get enthusiastic about WrestleMania and what it entails. Hell, I’m currently navigating a frantic week in which I’m juggling multiple work deadlines and dealing with the reality that my wife is due to give birth at literally any minute. Despite such serious commitments, I’ve still spent an undue amount of time pondering whether the Smackdown women will be stuck on the pre-show again (yes, they will as it happens).

Hundreds, maybe thousands, of UK fans will be making the familiar trans-Atlantic commute to be a part of it all but for those who can’t be there in living colour, there are more ways than ever to sample the various action. Streaming services such as WWE Network and FloSlam are offering hours of coverage to ensure that all corners of fandom can find something to suit their fancy. Remember, WrestleMania  isn’t just one night, it’s not even just a weekend event: it’s a week-long celebration of the art form and pretty much every company that plies their trade within this wonderful, crazy genre is at the party.

So with so much on the horizon, what should we, the insatiable wrestling fan, be looking out for? Here are some choice picks of the week’s action.

Dan Severn is in the house. 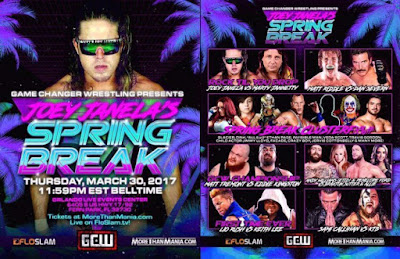 As was aforementioned, the streaming potential for this year’s indie offerings have been enhanced by the emergence of Floslam, a pro wrestling division of Flosports.  I’ll be sampling this service for the first time this weekend and I must confess that the reason for my imminent subscription is rather left-field: it’s not the EVOLVE cards that see Brit hero Zack Sabre Jr. mix it up in main events with ACH and Michael Elgin; it’s not WWN’s Supershow of PROGRESS vs EVOLVE match ups; no, it’s something far more random and ridiculous. It’s Joey Janela’s Spring Break show, an offering from Game Changer Wrestling (GCW) which airs in the UK at the frankly offensive time of 5am this Friday morning. This show is a gift that keeps on giving. Matt Riddle vs Dan Severn! Marty Jannetty vs the eponymous Joey Janela! Glacier will be there. Dink the Clown is advertised and an Earl Hebner run-in has been promised. I always wanted to do Spring Break and that was before I realised that Dan Severn would be there. Hook me up Floslam.

Us wrestling fans haven’t always had this much variety during Mania week. For some time, outside of the WWE shows, the only alternative that had real buzz was Ring of Honor’s Supercard of Honor. In recent years, ROH have had to up their game in the face of the increasingly wide array of competition and this year, they have gem of an attraction to ensure that they hold their own. In what might be the most anticipated tag team match in years, The Young Bucks face The Hardys in a Ladder match! Yes, they’ve had some brief altercations lately but they were only taster dishes: herein lies the feast. Given that Messrs Matt and Jeff have other plans from April 2nd, this is likely the last time these teams will meet (for some-time at least), suggesting that they’ll leave it all in the ring. Spring break just landed a super kick party.

Astonishingly, Jim Cornette has been invited to the WWE the Hall of the Fame and will be given a live microphone! Now, James E. might play this one safe. He might, out of respect for the Rock N Roll Express on their big night, toe the company line; he may even rationalise that a conservative speech and reliable performance here might paint him as a trustworthy figure and soon tempt Vince into inducting his beloved Midnight Express (an act he would surely be honoured alongside). So we might get a reflective, nostalgic Cornette who uses his time on stage at the Hall of Fame to play nice, to share some fascinating historical tit-bits and pay tribute his friends. Or he might totally lose it, burying Vince, modern wrestling, the fans, the PROGRESS dress code and Donald Trump (Linda McMahon’s career don’t need that) before telling all of America to go forth and multiply. Either way will be entertaining. But I hope he does it the second way. 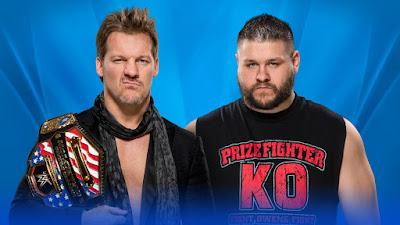 Contrary to the views of some, I think that KO-Mania 2 has a pretty good card and the build-up to the show has been consistently engaging and, at times, enthralling. The stand out match is the battle between Kevin Owens and Chris Jericho: their tale of friendship gone awry has been well crafted and skilfully executed and theirs is a match that has sizzle and substance. Other match ups generate intrigue because of the significance of their result: Bray Wyatt badly needs the win to establish his title reign as legitimate whilst the finish in Roman Reigns vs The Undertaker could clarify the future of the latter performer. Other contests are intriguing due to the potential layout of the matches: will Rollins and Triple H be over-booked in a similar manner to The Game’s bout with Sting? Will Shane McMahon rely on his customary high-risk spots or will AJ draw a wrestling match out of him? Will Goldberg and Lesnar go more than 2 minutes? I doubt this will be the best WrestleMania of all time (that’s X-7, now and forever) but I expect the show to perform above the expectations of many. Just spare us an encore Pitbull, yeah?

When is a surprise not a surprise? When it’s  sensible, long term booking!

The post-Mania Raw crowd is a cliché now: it even has its own WWE 24 tribute show so it is in itself not an excuse to get particularly hyped. As for the content, the idea of this being a night when we have to have surprises has become somewhat counter-productive. Can we be shocked if we are permanently braced for a shock? Can an air of unpredictability exist when Asuku starts touring with Smackdown in March and the WWE twitter feed removes semblances of doubt by writing BROKEN in block caps whenever it tweets about old Hardy matches? I’d argue no.

Most annoying of all is that many in the crowd, programmed to be anticipating unexpected twists, might suddenly seek to derail a segment because it had the temerity to not feature someone shiny and new. The solution to this predicament is to move away from booking to pop a crowd in the moment to ensuring that hot angles are designed with a medium to long term view in mind. To that effect a triumphant debut for Shinsuke Nakamrua, a Sasha heel turn on Bayley, a quick Asuka title win and the introduction of Kurt Angle as Raw GM would be productive moments that, whilst not overly unpredictable, serve purpose. As long as the Orlando TV tapings set the table for the coming months, then the WWE will have given us shows worthy of the occasion. 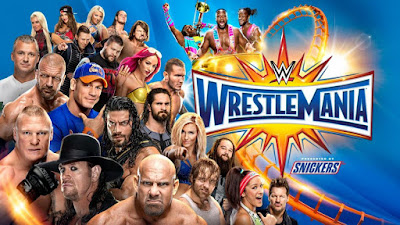 In closing, wherever you’re at right now, I urge you to fill your boots and consume as much grappling as is humanly possible. This is a week to embrace the glory of wrestling and appreciate it for what it is: an ultimately meaningless but undeniably fun distraction from the real world, a simple narrative given layers by skilled performers who are there to entertain you. If you’re attending shows live then be loud, be passionate and only chant CM Punk if he actually shows up.  If you’re at home, tweet about the moments that remind you why you’re a fan and not why Roman sucks. Wrestling should be pleasurable and if you can’t find any fun to be had this week, chances are you’re not looking hard enough.