WWE The Best of RAW and SmackDown Live 2016 DVD Review 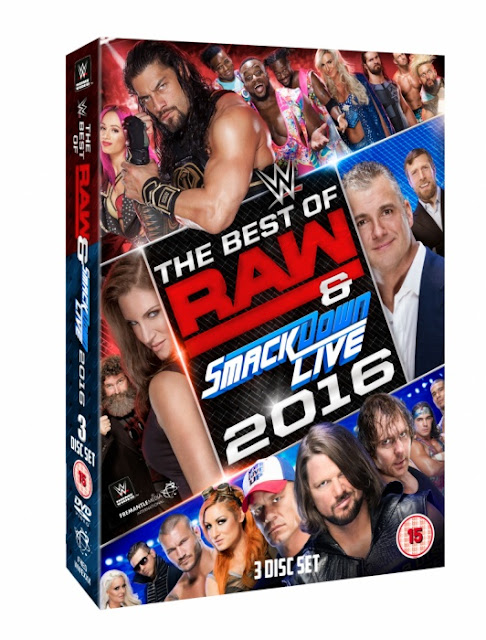 Across 2016, there was a number of changes across WWE's two major TV shows, as RAW and SmackDown (Live) were separated into two distinct brands in July. Of course, that means that the 2016 edition of this regular "Best of" release produces one of the most varied cross-section of a WWE year, as we jump from RAW and SmackDown running the same storylines on Monday and Thursday nights to two parallel live shows on Monday and Tuesday. Jerry "The King" Lawler host this year's compilation, with the likes of John Cena, Chris Jericho, Triple H, Daniel Bryan, AJ Styles, The Miz, Cesaro, Mick Foley, Kevin Owens and Seth Rollins all spotlighted at some across the six hours plus of footage. 2016 might have been eventful, but is The Best of RAW and SmackDown Live 2016 any good? Let's have a look!

Jerry Lawler is our host for proceedings but he only turns up twice on each disc, probably talking for about ten minutes all together, he isn't all that necessary and I would've preferred to have some interlinking narration between each month instead. After each month's chosen matches or moments have played out, there's a highlight vignette looking at the rest of the month, which does as good a job as a video trying to squash 20 plus hours into 3 minutes can. I'm not sure that these couldn't have been better utilised at the start of each month, although perhaps a chronological timeline that jumped out for full matches or segments would have worked even better.

January - We begin with Charlotte defends the Divas Championship against Becky Lynch, in a match, that whilst is technically solid, struggles to grab the Laredo audience, making it a questionable choice to kick things off with. In another match that has it's moments, but plays out in front of a mostly uninterested New Orleans as Kalisto challenges for Alberto Del Rio's United States title. 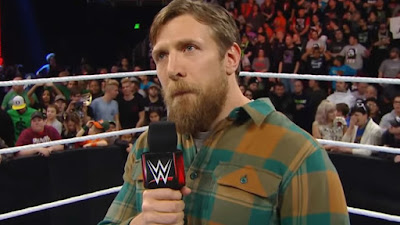 February - Daniel Bryan's "I Am Grateful" retirement speech is still an emotional watch over a year on. Bryan's natural understated charisma manages to add to his heartfelt promo, whilst being in front of what he calls his hometown crowd in Seattle makes for some spine-tingly, eye-watery viewing. AJ Styles and Chris Jericho's rematch is the first properly good match, as the Portland crowd laps up the physical back and forth action, as the duo put on a match on par with their WrestleMania outing a few months later. Shane McMahon's return  is included in full (apart from Vince saying fuck, obviously) and in all it's Vincent K. McMahon Legacy of Excellence award glory. Honestly, this is a fantastic piece of television in general, as Shane, Vince and Stephanie bounce off each other and get the audience hanging off their every word.

March - The shortlived Y2AJ tag team battling The New Day's Big E & Kofi Kingston over WWE Tag Team Championships is a real forgotten gem, followed up by a brilliant tag split angle that has some interesting parralels to Jericho's current storyline with Kevin Owens. A super-rare televised bout for then WWE World Heavyweight Champion Triple H opposite Dolph Ziggler plays out in front of a Pittsburgh crowd that doesn't seem to be buying what The Game is selling, but does include a couple of nice near falls for The Show Off. Roman Reigns post-match return and torrential attack on the Champ is much more entertaining, but still did little to win over the audience to the story. AJ Styles and Kevin Owens give us a taster of what they could do together in the ring, but their match on the RAW after was a better outing and would have been much better suited for the set.

April - Apollo Crews' debut squash of Tyler Breeze  is a strange addition, but Sami Zayn vs. AJ Styles from a week later is expectedly good, with the pair showing great chemistry as they weave a compelling story that concludes with a series of exciting near falls, as Styles continues to be the MVP of the release. 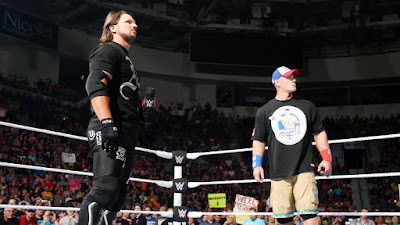 May - There's a decent tag bout with Kevin Owens & The Miz facing Cesaro & Sami Zayn, that focuses heavily on the relationships between the four characters ahead of their instant classic Fatal Fourway at Extreme Rules. The wonderful altercation between AJ Styles and John Cena from Memorial Day still brings a smile to my face because of the sheer energy and excitement that Green Bay brought. Cena and Styles could have simply stood in the ring and looked at each other for fifteen minutes and it would have been gold, this was a vital cog in the wheel that was their magnificent 16/17 feud.

June - A segment with The New Day interacting with Enzo & Cass is mostly innuendo regarding the potential infidelity of Xavier Woods' trombone, which is nice. It's followed up by the two teams joining forces against The Club and The Vaudevillains in a well-paced outing, that's let down by a scrappy finish. An intriguing six man tag with Dean Ambrose, Cesaro and Sami Zayn taking on Kevin Owens, Alberto Del Rio and Chris Jericho is a little disappointing considering the wealth and depth of talent in the ring, but does a solid job of creating issues ahead of the Money in the Bank Ladder Match.

July  - As the brands split, Seth Rollins and Dean Ambrose put on an explosive World title bout on the first SmackDown Live, full of urgency from the very beginning and with a physical brawling style throughout. Sasha Banks challenging for the RAW Women's Championship against Charlotte comes from one of the strongest episodes of RAW from 2016 and was arguably the match of the night from that show from Pittsburgh. The match builds logically towards its conclusion with each moment feeling like it directly rolls into the next, before coming to a close with a great slice of submission wrestling, all in front of a hot crowd. From that same episode, Finn Balor v Roman Reigns, for the chance to wrestle Seth Rollins over the first Universal Championship, is a strong example of taking two opposing style and meshing them together to create a story that an audience can invest in. Back on SmackDown, a #1 contender's six man scramble, featuring Bray Wyatt, Apollo Crews, Baron Corbin, Dolph Ziggler, AJ Styles and John Cena, sticks to the one in one out pattern for the most part, but does offer some intriguing combinations and an exciting finish. 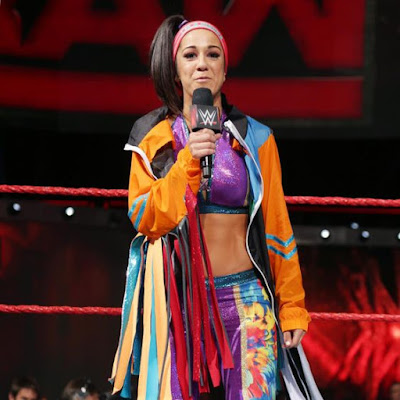 August - Bayley's RAW debut is a lovely moment, with the crowd seeming genuinely happy to see Mick Foley introduce the former NXT Women's Champion, however, it's Charlotte Flair who makes the most of the segment with some great one-liners, before Bayley battles Dana Brooke in an extended squash. Another big 2016 call-up saw American Alpha's Chad Gable & Jason Jordan jump to SmackDown and their SmackDown Tag Team Championship Quarter Final with Breezango is a surprisingly balanced outing as both sides play their roles well in what may be the sleeper contest of the set. Roman Reigns, Kevin Owens, Seth Rollins and Big Cass battling over the vacant Universal Championship is probably the most memorable RAW match from the year, full of dramatic twists and turns, including the return of Triple H. The booking is perhaps questionable, but in a vacuum this is brilliant multi-man bout, with quality performances from all four and a shocking conclusion.

September - The Cruiserweights arrive on RAW, which is unfortunately means we get Mick Foley butchering a promo on their return, before reading out his introductions off a piece of paper. Luckily, Rich Swann, Gran Metalik, Cedric Alexander and The Brian Kendrick, put on a fun aerial display, that gives each guy an opportunity to display their style. The Miz and Dolph Ziggler's verbal duel in their hometown, in front of their parents, is expertly put together and has a breathtaking crescendo as the wheels are set in motion for their No Mercy barnburner.

October - Michael Cole introduces Goldberg's comeback, in which the former World Heavyweight Champion discusses how much he loves kids and looks menacing for a little while. Dean Ambrose v AJ Styles is a solid encounter, with the pair working past a lack of real chemistry, that is unfortunately cut short by James Ellsworth just as it seems to be finding it's groove. 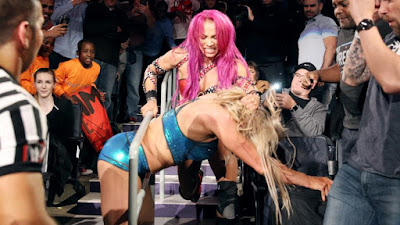 November - Alexa Bliss challenging Becky Lynch for the SmackDown Women's Championship starts hot, but quickly cools in front of a Glasgow audience who seem to get bored and things aren't helped by a screwy finish. Fortunately, the set concludes with a very good Falls Count Anywhere match over the RAW Women's Championship as the Sasha Banks v Charlotte Flair feud rolled on, in a bout full of creativity, physical wrestling and strikes and two world class performances.


Set in a Sentence - A very strong collection of matches and moments from 2016 and with a few exceptions, this three disc set manages to cherry-pick from the higher end of WWE's television output throughout the year.