SUPERSTAR SHAKE-UP! The promise was that the Superstar would be well and truly shaken-up like a bottle of Apple and Raspberry J2O and that would surely make for a brilliant episode of Monday Night RAW, right? Let's take a look see.

A quick and pacy opening segment to kick things off, as The Miz (and his wife Maryse) and Intercontinental Champion Dean Ambrose were revealed as having been shaken-up to RAW. The segment cleverly introduced the episodes gimmick, starting off with two surprises, before a Dirty Deeds on John Cena shirt clad Miz put an exclamation point on things.

The Sami Zayn sucks up to General Manager's angle continued backstage, before an interruption from The Miz would result in Kurt Angle placing them in a match later on. 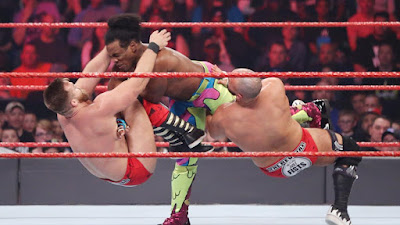 The clash was an entertaining watch, with a couple of big spots, including the finish where Woods dived into a variation of The Shatter Machine, but the structure was pretty much you're basic tag matter. The only drag here was a weird sequence that saw Big E hit a Belly to Belly Suplex into the corner and then awkwardly have to position Dawson for a rope-walk elbow drop, where Woods slipped and didn't seem to get enough distance. A solid tag opener, although it's a shame to see this Revival v New Day feeling so rushed after two matches in a row on television. The angle with Kofi Kingston getting injured last week at the hands of Dash Wilder and Scott Dawson last week was a big angle and the two groups could have a killer lengthy feud with each other that could help to bring the spotlight even further onto RAW's blossoming tag division, but it seems that WWE isn't going in that direction as Wilder and Dawson picked up a clean and impressive win here. I have a feeling we'll be seeing the cereal peddlers on the blue brand heading out of the shake up.

A Charly Caruso interview with Cruiserweight Champion Neville broke down quickly, with TJ Perkins being a dick about something or another, whilst Neville hypothesised that the two weren't that different. The seeds for a Perkins heel turn were planted when Austin Aries turned up in his lovely jacket and then ate a banana.

Curt Hawkins got drafted to RAW and then knocked out by The Big Show. 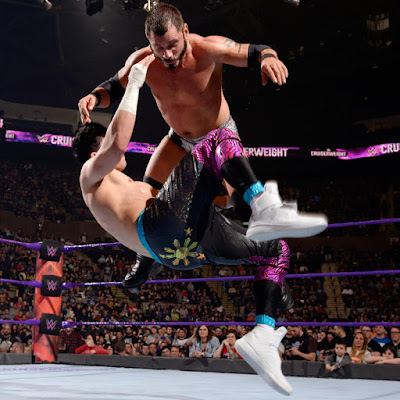 The only Cruiserweight action on the show produced TJ Perkins first one on one victory since late-January and over the #1 contender no less. The match was a decent showcase of what the two could do, as they exchanged some quick holds and strikes. There wasn't much substance behind it, but the short bulk of the match was a good exhibition. It was a shame that the two weren't given more time here, with the match being cut-short by Neville leaving the commentary desk and a flash pin for TJP. The Cruiserweight division is only going to get over if they're allowed to do what they do best and produce exciting, fast-paced action with less complications, that make the division feel the same as everything else on WWE's TV menu. Perkins subsequently attacked Aries post-match, completing his much-needed heel turn. Why this had to be done at the expense of the current Number One contender I couldn't tell you. 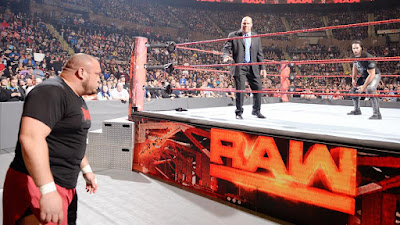 Despite it's strange and clunky title, this segment was actually pretty straight forward as Seth Rollins openly considered whether to jump to SmackDown, because of the potential repercussions of sending RAW Commissioner Stephanie McMahon through a table at WrestleMania. Rollins got a decent reaction as he explained he'd be staying, because he didn't want to take the easy way out, but it was new General Manager Kurt Angle who got the biggest reaction when he interrupted The Kingslayer. The interaction between the two was nice, with Angle putting over Rollins performance at Mania, with a cool comparison to his Olympic Gold Medal win with a "broken freakin' neck". This is where Angle will be at his strongest in the General Manager role, with his return popularity being able to put over talent, stronger than a fumbling Mick Foley could. The segment closed hot as Samoa Joe jumped Rollins, with the two brawling as Angle attempted to keep them apart. I'm not quite sure how things ended as I was too busy getting excited about Angle and Joe sharing a ring on Monday Night RAW and kind of hoping that they'd butt heads again.

In an interview with Charly Caruso, United States Champion Kevin Owens discussed having Intercontinental Champion Dean Ambrose on the brand, after initially calling himself the Number One champion on RAW. 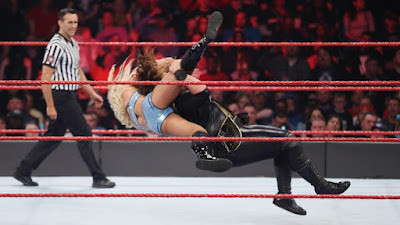 After a sloppy opening, a couple of big spots towards the end of the contest managed to save the only Women's match on the card. The first few exchanges were clumsy, especially when Flair was on the offence, this wasn't helped by a crowd that wasn't sure how to take what was still a heel on heel contest even after Jax turned on Flair last week. It looked like Charlotte was struggling with having someone larger than her as an opponent and whether that's true or not it something didn't quite connect early doors. A decent near fall of Natural Selection and a brilliant sequence on the apron that concluded with Flair flying to the floor with a Moonsault saw the pair recovering for the early stumbles and pulled the Uniondale crowd back from an in-crowd distraction. Jax's quick rebound and subsequent victory following a Samoan Drop made her look like a real force, but it's also a shame that similar to the New Day and Revival feud that this story has been rushed through and hasn't received the time and attention that could have made it a hit. It would appear that Charlotte Flair will be heading to Tuesday nights.

Finn Balor's first singles match since last year's SummerSlam saw him go over Jinder Mahal in a brief, but surprisingly physical, match. Mahal appearing to be attempting to go straight through Balor's skull with his elbow was the most memorable moment, with the slow motion replay looking particularly nasty. Bray Wyatt appeared on screen following the match, signalling his move to RAW, with his WWE title match with Randy Orton being scheduled for RAW PPV Payback.

The Miz's return match to RAW after nine months, ended in defeat to Sami Zayn as the two connected well in a match that lacked TV time. The two produced a couple of nice sequences, including Zayn turning Miz's Yes Kicks into a Blue Thunder Bomb, before Zayn sneaked a roll-up win despite Maryse's interference. 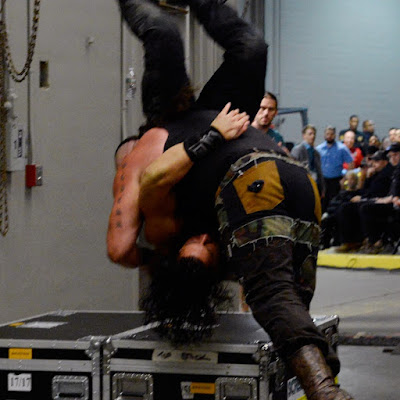 What appeared to be a fairly run of the mill sit-down interview, explaining Reigns' feeling after retiring The Undertaker, became one of the most over-the-top segments in recent memory. I'm not sure how to actually review Braun Strowman's huge assault on The Big Dog, but it was utterly ridiculous. I was fairly satisfied with the original spot that saw Strowman lob Reigns over a crate and through a table, as it was visually impressive and appeared painfully destructive. I'm not quite sure how I feel about each subsequent addition to the attack, at times I found myself laughing while watching because some of the stunts were ridiculous and made for surreal viewing. I could perhaps handle the pushing a stretcher off a ledge thing, but Strowman turning over an ambulance was maybe a step to far, but then again it certainly made the viewer sit up and take notice. The crowd reciting their now expected anti-Reigns chants produced an even weirder edge, but I'm sure WWE won't give a fuck because the audience was actively anticipating in the developments on screen. All that was really missing was Ron Burgundy (or at least Lance Catamaran) quipping "Well that escalated quickly" to close things off.
The RAW Tag Team Champions and their #1 Contenders got a good exhibition as the Hardy Boyz, Cesaro & Sheamus picked up a win over The Club & The Shining Stars in a merry eight man tag outing. Both teams had the opportunity to shine with the #1 contenders getting the face shine, before The Hardy Boyz took the hot tag, including a cool variation of the Poetry in Motion double team to the outside.

It appeared that Emma and Dana Brooke are being moved into a feud, in a backstage segment that saw Brooke reading a book called "How to Be Your Own Protege" 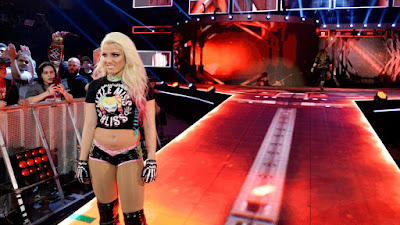 The RAW Women's division got the shake-up treatment as Alexa Bliss (to a big pop) and Mickie James shifted to Monday' in a busy piece. It seemed that we'd get to see Sasha Banks turn on Bayley earlier on, as The Boss proclaimed that Bayley's "moment was over", only for Bliss to make her entrance seconds later. Bliss made the most of the opportunity, as she continues to impress on the mic, running down Bayley and Banks' friendship, whilst keeping the crowd where she wanted them. James' RAW return was less exciting, but mainly because it wasn't long before she was decked by Nia Jax. There was hints at an alliance between Jax and Bliss, with the Hybrid Athlete cleaning house with Bayley and Banks both falling to the one who isn't like most girls. The more I think about a potential partnership between Bliss and Jax, the more I think it'll be the best thing going. Both compliment each other, in terms of both character and abilities, but it'll potentially hinge on how the duo are booked if they do get paired. 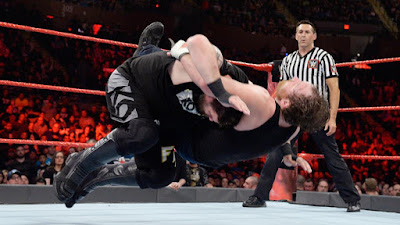 Promoted as a "Champion v Champion" match, Dean Ambrose and Kevin Owens revisited their 2015/16 feud and produced a dynamic main event. The two created a physical clash, that included Owens throwing The Lunatic Fringe into the ringpost from a Fireman's Carry position, in the early goings, before transitioning into a series of high-pace reversals and finisher attempts. The first part of the match kept things interesting with a couple of well-placed big moves, like the ringpost assault and also Owens' Pumphandle Neckbreaker, as The Prizefighter controlled proceedings. Once the bout hit it's stride following an Ambrose comeback, that included him suicide diving into the crowd, the two worked together like you'd expect from competitors who've had 80+ matches with each other. The finishing sequence, alongside a great string of blocks and reversals moments earlier, capped things off the right way, with the returning Ambrose picking up a clean victory with Dirty Deeds. Things got worse for Owens as he took a Codebreaker from Chris Jericho post-match, making Owens another prime candidate to switch to SmackDown on Tuesday. 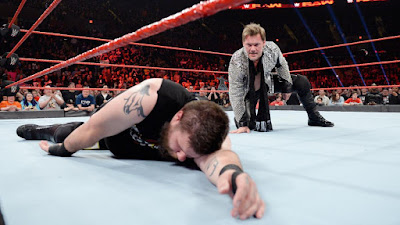 The score is probably a slight disservice to what was an entertaining show, with the Shake-Up gimmick providing plenty of noteworthy moments. The multiple debuts or returns were almost all cool surprises, with names that will help to create interesting television on Monday Nights. The wrestling was mostly inoffensive, with a string of average to good bouts, with the main event particularly impressing, but there also wasn't much that would be worth going out of your way to see either. I think I enjoyed Roman Reigns getting battered by Braun Strowman, but I'm still not quite sure how I feel, whilst I felt that the Women's segment was the strongest non-wrestling segment on the show with an impressive debut from Bliss and an intriguing shift with Nia Jax appearing to stand by her diminutive colleague.

In a Sentence - I wouldn't watch it again, but I enjoyed watching it.