On the 6th of April, WWE aired the 242nd episode of NXT, taped at the Amway Centre in Orlando, Florida on 1st April. This week's episode featured matches filmed before the Takeover special that same night and was main evented by the former CZW Heavyweight Champion Oney Lorcan (née Biff Busick) taking on a mysterious opponent (Spooky). With matches featuring Peyton Royce, Aaliyah, Heavy Machinery and the Bollywood Boyz aswell as Behind the Scenes footage and interviews from the recent Takeover, could it defeat the curse of the Post-Takeover NXT and be anything other than filler? Let's find out... 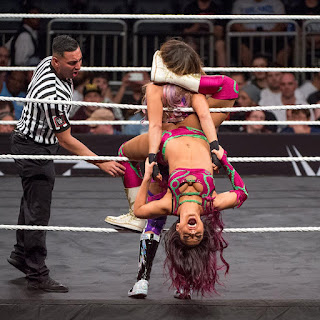 Aaliyah has new entrance music, it's an odd piece of glitchy-pop that at least affirms she is a face now. Nigel McGuinness is to the Iconic Duo what Graves was to Eva Marie by which I mean one step away from dropping to the floor, tearing off his immaculate suit and professing his worship to his Khaleesi(s). Early on Aaliyah controls the action with a combination of some nice clean kicks and decent grappling. Billie and Peyton use the numbers game to gain advantage, Peyton works over Aaliyah nicely showing off her improved heelish mannerisms and a rather pretty rope-drench submission adaptation of her entrance pose. Aaliyah gets a babyface comeback that nearly elicits a reaction from the Orlando crowd, Royce cuts her off again with a big kick and a lovely bridging Suplex for the pin. Not revolutionary stuff but had enough flashes of interest to suggest these two could something much better if given even a full three minutes. 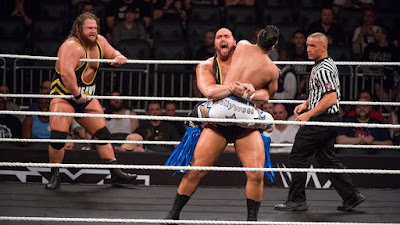 So I think Bollywood Boys have turned heel, or they've just got leather jackets, I'm not sure.
Harv Sihra starts off trying to control the action against big Tucker Knight, he goes off the top rope into a big bear hug from Knight, tag to to Dozovic, they throw the former GFW Tag Team Champion from one Bearhug to another followed a lovely German Suplex from Otis. The crowd are starting to get into this one, then Harv and Gurv start working over Otis in the corner and they go dead again.The Boyz go for double team suplex only for Dozovic to reverse it into a Double suplex, Tucker gets a 'hot' tag, he murders the boys, gives out a little Tugboat "woo woo" splashes both Boyz in the corner before a tag to Dozovic and a finisher which looks like Dozovic does a World's Strongest Slam while Knight does a pile-on like a big lad. The very definition of Tag Team Face Win formula. While Heavy Machinery are surprisingly over already, I really hope we aren't building to Authors of Pain vs Heavy Machinery any time soon. 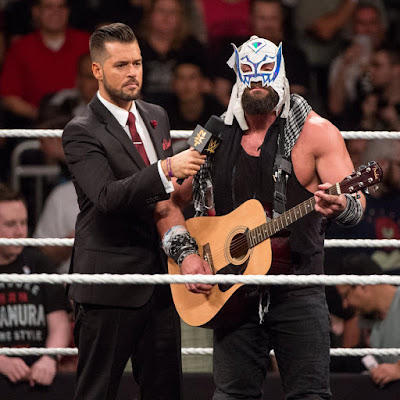 Lorcan's mystery opponent turns out to be El Vagabondo, a masked wrestler who'se definitely not Elias 'The Drifeter Samson' despite dressing the same, moving the same and playing the same shitty guitar. Vagabondo is immediately the most over thing on the show, he even gets a pop for his song which Elias Samson never could though I don't know why I'm comparing two such different talents. Lorcan stops his song by putting his hand on the guitar and gets immediate heat, he says everyone knows Vagabondo is the Drifter, the crowd refuse to stop playing along, Lorcan now has Elias Samson heat. Vagabondo, from the off, starts controlling the match using his size and power advantage over Lorcan. After coming back from an advert break that seems to last longer than Royce V Aaliyah, Lorcan manages to break out and spring together a half decent comeback sequence showcasing some decent fire. The match end comes when Lorcan climbing on Vagabondo's back pulls off his mask to reveal it was Samson! It was Samson all alooong! Running Blockbuster from Lorcan in the confusion for the pin. Once again, solid but forgettable work. Credit to McGuinness for selling the match story like a champ in the commentary booth.


In answer to the question I asked at the beginning... no.The post-Takeover show is always filler, something to tide you over until they can actually tape more episodes. That said, even by those low standards, there was a supreme feeling of 'who cares?' to all the events of tonight, with even the backstage interviews giving no new information. All the performers worked hard considering their time but seemingly the only ones capable of getting a reaction out of the 'Mania weekend crowd were Lorcan & Vagabondo and they got the wrong reactions. This is an episode for Elias Samson completists only.