On the 12th of April, WWE aired the 243rd episode of NXT, taped at Full Sail University in Winter Park, Florida on 5th April. Starting off proceedings with a rather fun new theme tune that sounds like they couldn't be bothered to keep paying Astroid Boys for their UKCT theme and some lovely new opening credits, this was clearly a soft reboot for the developmental brand This week's main event featured the emotional goodbye of the King of Strong Style, Shinsuke Nakamura, as he heads off to Smackdown to make Dolph Ziggler job again. With matches also featuring Aleister Black (neé Tommy End), Drew McIntyre (neé Galloway), Tomasso Ciampa, Jonny Gargano, Ruby Riot, Kimberly Frankele & Oney Lorcan, could it improve on last week's dissappointing presentation?

Not so much a match as a single delayed kick. Hollis bounced around the ring till he jumped straight into a Black Mass from the former PROGRESS & WxW Tag Champ for a quick pin. Black celebrated his quick victory with a Full Lotus in the centre of the ring. Obviously not a technical competition but it served its purpose and the crowd are already willing to take their coffee Black. 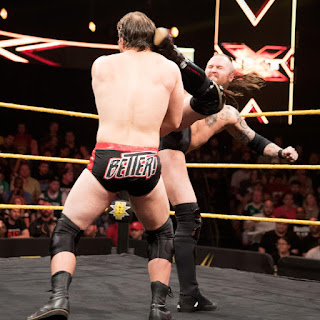 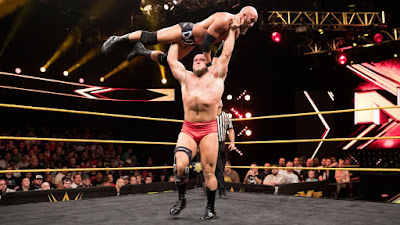 Ciampa and Miley start proceedings, Miley looks like every other guy on the WWE roster if Vince re-drew him to his personal tastes, he controls both of the former NXT Tag champs with some big lad offense including a brutal looking stalled suplex at least until he tags in partner Blais who gets rocked easily by Johnny Wrestling and the Psycho Killer who hit the (FINISHER) for the win. After the match, Miley would murder his tag partner for the crime of losing. Some more fundamental, basic structure tag stuff but it did its job in establishing Miley as a monster to watch. That said, it's a shame that even if they got the win, this really had nothing to do with #DIY. 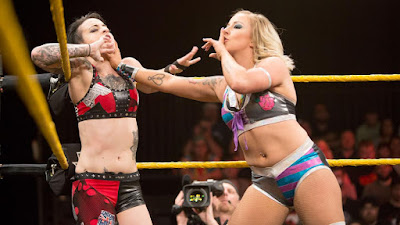 It's now time for the Shimmer Main Event as former CHIKARA Grand Champion Kimberly took on the woman once known as Heidi Lovelace. Kimberly would control the action early on with some lovely stiff chops and kicks getting a nearly fall off a facebuster and a tilt-a-whirl backbreaker combo, Nikki Cross would come to ringisde and do her nutter shtick somehow causing in fact a distraction allowing Ruby to get a comeback sequence leading to her wind-up Pele Kick finisher staring down Cross as she got the pin. Cross would then walk away laughing and looking all manic like. It did what it had to do but these two have had many significantly better matches, most of them longer than 3 minutes it's obviously building towards a one-on-one between Riot and Cross which should be good. 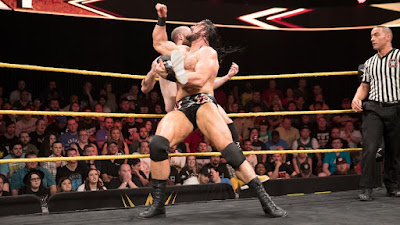 Drew's not using Bad Dreams anymore, he has an entrance theme that's Metal as Fuck but also has bagpipes to remind you, he is Scottish. He gets a hero's welcome from the Full Sail crowd who've been surprisingly tolerable this taping with their most inventive chant being 'welcome back'. A nice change from their normal tone of 'we are more important than the wrestlers'. Talking of the wrestlers, for the time they were given they put on a good match with Drew playing heavily off his strength and size advantage but Lorcan managed to once again showcase his comfort levels with opponents of all sizes by using his blend of big ol' strikes and, well, running strikes but he's good at hitting people. The match featured some fine back-and-forth with highlights including an attempted crossbody to the outside by Lorcan, caught and reversed into an Apron backbreaker, a beautiful suicide dive by Lorcan and an Avalanche Front Headlock Suplex by Drew leading through a massive Alabama Slammer and a Test-sized Big Boot for the pin. Sadly no Futureshock DDT but that maybe be down to Almas and Roode already having DDT finishes. Fine, crisp stuff from both men making Drew look like a world beater with Lorcan still looking impressive in defeat. 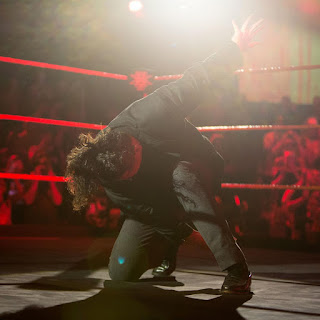 The Two-Time NXT Champion has his graduation speech, coming to the ring in a black t-shirt, black blazer, charcoal grey trousers and what may have been winkle-pickers but I apologise if my shoes calls are as bad as my spot calls. He has the standard 'I'm going to Smackdown but NXT will always be home' type spiel, making you realise quite how big an impact he's had in just the year he's been here. It's also notable quite how fluid the speech is showing quite how good Shinsuke's English is. Also he's a charismatic, charming fucker who could probably drag a doctor off a plane and knee him in the head and still be cheered. Thank you for the past year Nakamura, now go kick the head off SmackDown: Live. In his own words, 'We Are NXT. YEAOH!'

With the new opening, the Full Sail debuts of Black, Riot & McIntyre and the fond farewell to Nakamura, this was clearly an episode all about building up the roster after losing arguably its top Main Eventer, Tag Team and Midcard hero in Nakamura, The Revival and Dillinger. It managed to present a lot of potential options going forward with everyone from McIntyre to Miley managing to show something. That said, while the in-ring action was solid if unmemorable, it did enough to present the developmental brand as one moving forward and developing quite nicely indeed. Now if they can just wrap-up the 'Who injured Itami in the car park' storyline...